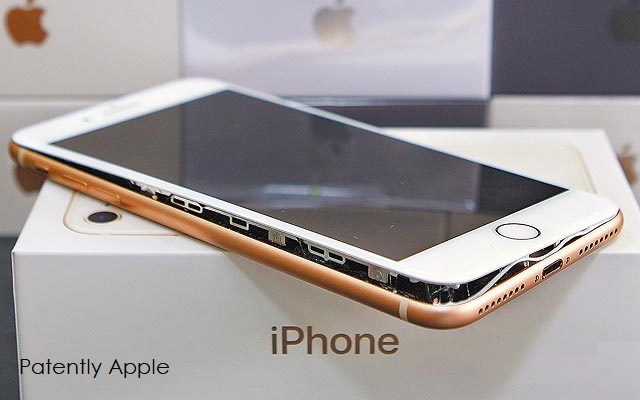 On October 05, 2016 Patently Apple posted a report titled "Southwest Airlines Flight Evacuated due to a Replacement Samsung Note 7 Catching on Fire." It was likely the straw that broke the camel's back forcing Samsung to formalize a full worldwide recall of their Note 7. The South Korean press went ballistic calling the U.S. recall of the Note 7 a protectionist move to protect Apple. A few weeks later the Korean press reported on a 'smoking' iPhone 5s onboard a Korean Airlines flight and it forced an investigation by the Korean Government. Although nothing came of the investigation, the anger over the Note 7 recall ran deep.

With a year gone by, has the anger receded any in South Korea? You'd think so, for most, but the media hasn't forgotten that their beloved Samsung suffered a global humiliation thought to be driven by the U.S. Government to assist Apple. Do you think I'm kidding?

Today a new South Korean report has surfaced stating that "Apple's iPhone8 Plus is expected to be released in South Korea without any actions taken while there has been a concern about its stability due to swelling of its battery which has happened various places of the world.

Possibility of unexpected damage due to swelling cannot be ignored as well. There are strong public opinions that want at least some kind of tests on batteries before iPhone 8 Plus is officially released."

With only 11 cases reported worldwide and no fires being reported, how big a concern is there beyond that expressed by the Korean press and those that want pay back for the Note 7 disaster?

The report further noted that "It is heard that Apple Korea also did not perform any safety tests of batteries. Apple Korea and mobile network providers are going to release iPhone 8 series on the 3rd of November as originally scheduled in spite of growing concerns on swelling of batteries.

Although Apple announced that it will investigate internally, it did not mention regarding ways of investigation and corresponding products and is continuing to sell iPhone 8 series without any measures.

Swelling is a phenomenon where electrolyte inside of a battery expands as it changes into gas. Depending on how much a batter sells, there is a higher chance that a battery may explode which will result to serious damage such as serious burned skin."

The report increases their hysteria with every passing paragraph. While only a few cases of this issue have been reported, the Korean report has already predetermined that this is a "phenomenon" related to batteries and one that will lead to damage.

A representative for KATS stated that "We are carefully observing swelling phenomenon of iPhone 8 Plus as there was the battery incidence of Galaxy Note 7 last year. Because we cannot do anything with products that are not currently distributed in markets according to Basic Laws on Safety of Products, we can only examine iPhone 8 series after they are released." It is expected that there will be significant amount of controversy when a swelling phenomenon is received officially.

There is a chance that iPhone 8 Plus may become the first product to be applied with 'Guideline on Recall of Devices' that was announced by South Korean Government.

If a manufacturer receives a warning or an order for a recall from Central Administration Organization according to Basic Laws on Safety of Products, it needs to carry out a recall immediately.

Director Yoon Moon-yong of Green Consumer Network in Korea's ICT Policy Bureau stated that "South Korean Government must make it an obligation to investigate samples of products that have possibilities of causing accidents before they are released since this is a problem that is directly connected to safety of consumers."

The rivalry between Apple and Samsung fans began with Apple suing Samsung for patent infringement regarding several aspects of the iPhone. The case is still ongoing as Samsung is dragging it out and fighting it at every turn. A large contingent of their fan base absolutely hates Apple and this hysterical report confirms that they haven't forgotten the Note 7 recall and their theory that it was a fake recall to help Apple. The report is almost pushing the government to make a judgement call for a recall at the earliest possible moment.

At the end of the day, stay tuned because this radical element in the South Korean tech press isn't going to stop pushing the issue. Their plan is simple: Sow Fear, Doubt and Uncertainty (FUD) into the Korean market at every possible turn prior to the iPhone 8 going on sale in the hopes of slowing down and hurting iPhone sales. With Samsung presently in turmoil, their fans need some good news and hurting Apple's iPhone sales sounds like the temporary fix that will do the trick.