Home Archives Contact Us Subscribe Twitter MeWe Facebook Patently Mobile
Reuters says the $1,000 iPhone is a real Danger to Apple in China & Bloomberg publishes last minute Predictions
Fortune Interviews Cook on Apple being one of the top Three Companies that are changing the World 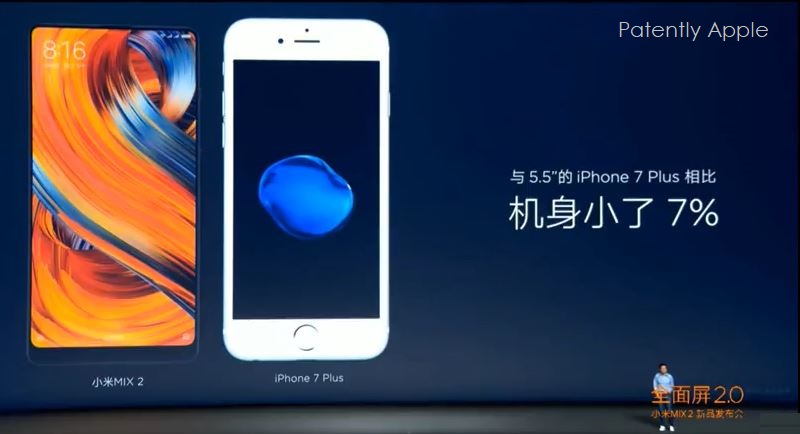 Earlier today Patently Apple posted a report titled "Reuters says the $1,000 iPhone is a real Danger to Apple in China." In that report I noted that the Reuters was saying that the stiff $1,000 price tag for Apple's top end smartphone being revealed tomorrow was going to be a real problem for Apple in the face of Chinese Vendors selling their premium smartphones at half price. Today, to get ahead of the iPhone's launch, Xiaomi held their keynote to introduce the new Mi Mix 2 smartphone starting at $535. Our cover graphic is from today's keynote, and as you can see above, Xiaomi's CEO Lei Jun was showing off his company's new phone against the iPhone 7 Plus and saying that their new 5.99" display is even much bigger than any of the new iPhones being launched tomorrow.

The newly launched Mi MIX 2 is an upgrade from last year's Mi MIX, which will be available in China from September 15. 'Mi MIX 2' comes with 6GB RAM in three storage versions - 64GB, 128GB and 256GB - with full-screen display. Mi MIX 2 comes with a 5.99-inch screen with 18:9 full-screen display for more viewing space and a better immersive experience.

The new phone also has a hidden speaker in which sound output comes through the screen itself – something that Apple filed a patent for in 2014 but has never implemented. The new Mi Mix 2 smartphone also sports a unique unibody design. This just happens to be a feature that Patently Apple reported on this past weekend covering an Apple patent filing made in Taiwan.

Below is a version of the Xiaomi keynote with English Translation along with a review of the new smartphone by U.S. video blogger Marques Brownlee.