Home Archives Contact Us Subscribe Twitter Facebook Patently Mobile
Google Announces a Major Move into Hardware with a $1.1 Billion Dollar Deal with HTC prior to their October Event
Official Announcement and more Details on the Sale of Toshiba Memory Corp to Pangea formed by Bain

While Preorders for Apple's iPhone 8 in China reached over 4 Million, Samsung's Note 8 barely broke the 13,000 Mark 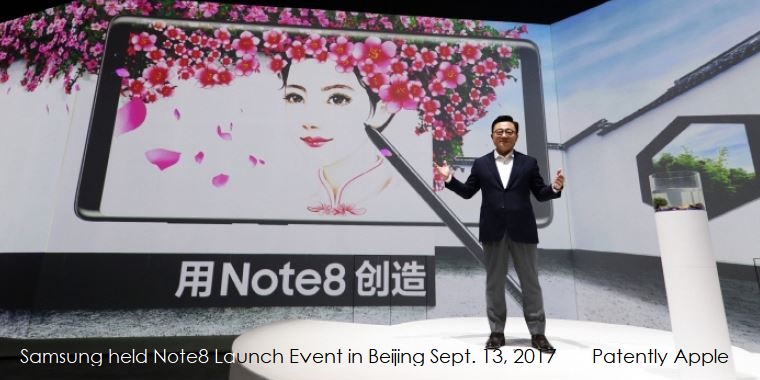 According to a new report posted by a Korean news site today, Samsung Electronics is seeking to win back the Chinese smartphone market with the Galaxy Note 8. The company plans to regain the trust of consumers that was battered by the Galaxy Note 7 battery fires and overcome China's retaliation against South Korean companies over the deployment of the U.S. Terminal High Altitude Area Defense (THAAD) missile system. However, Chinese mass media is pouring negative articles about the Galaxy Note 8 every day. Consequently preorders for the new Note 8 pale in comparison to those for Apple's new iPhone 8.

Preorders of the Samsung Galaxy Note 8 reached 8,310 and 5,292, respectively, at JD.COM and Alibaba's Tmall, the two largest online retail marketplaces in China, as of 2:40pm on September 19. Considering preorders through Samsung Electronics' official websites and stores, the figure is estimated at over 20,000.

Chinese media is eager in criticizing the Galaxy Note 8 by comparing Apple's iPhone 8 which began receiving preorders around the same time. A Chinese IT news outlet said, "The iPhone 8 received more than 4 million preorders but the Samsung Note 8 received only thousands of preorders."