Should the Bain Capital bid for Toshiba be successful, it could be Apple's largest Deal Ever 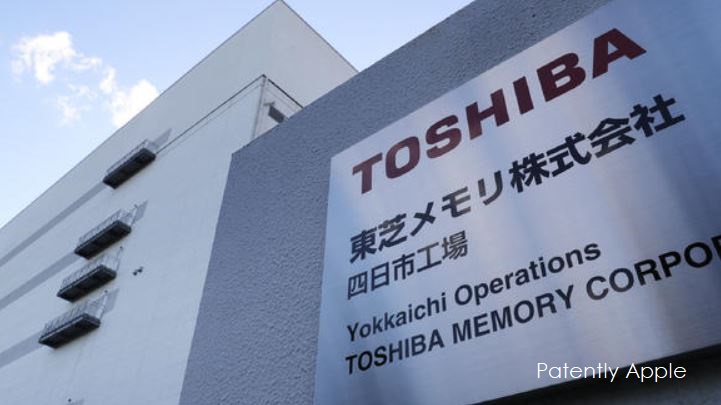 Yesterday Patently Apple posted a report titled "Toshiba Signs Memorandum of Understanding with Bain Capital's Consortium for Toshiba Memory Corporation." A last minute twist in the bidding was revealed in our Tuesday report titled "A Last Minute Twist may have the Bain/SK Hynix/Apple bid the Winner for Toshiba's Chip Business." That twist was upping the bid because Apple was now in on the bid. Now it's being reported that "Apple Inc. is playing the role of kingmaker in the contentious battle for Toshiba Corp.'s memory chips business."

A new Bloomberg report states that "The iPhone maker is in talks to provide about $3 billion in capital for Bain Capital's bid for the unit, adding to financial support from Dell Inc., Seagate Technology Plc and SK Hynix Inc., according to people familiar with the matter.

That support convinced Toshiba to sign a memorandum of understanding with Bain and work toward a final agreement this month, said the people, asking not to be identified because the matter isn't public.

Yuji Sugimoto, managing director for Bain in Japan, worked to win Apple's support. The precise composition of the Bain group is still in flux and may change, the people said. There is no guarantee they will be able to reach a final agreement with Toshiba.

The Cupertino, California-based company is helping swing the deal away from Western Digital Corp., one of Apple's own suppliers that tried to buy the chips unit with KKR & Co. Apple's money will help fill a gap left when state-backed Innovation Network Corp. of Japan and Development Bank of Japan decided to pull back from the Bain bid in the face of litigation from Western Digital. Apple spokesman Josh Rosenstock declined to comment.

Apple has opposed Western Digital's bid and decided to back Bain because of the business's strategic importance, the people said. Apple depends on flash memory from Toshiba in its iPhones and iPods, and wants a continued supply so it's not dependent on rival Samsung Electronics Co.

Apple plans to take an equity stake alongside Bain, they said. If the agreement is completed, it may exceed Apple's largest deal ever, the $3 billion acquisition of Beats Electronics LLC."