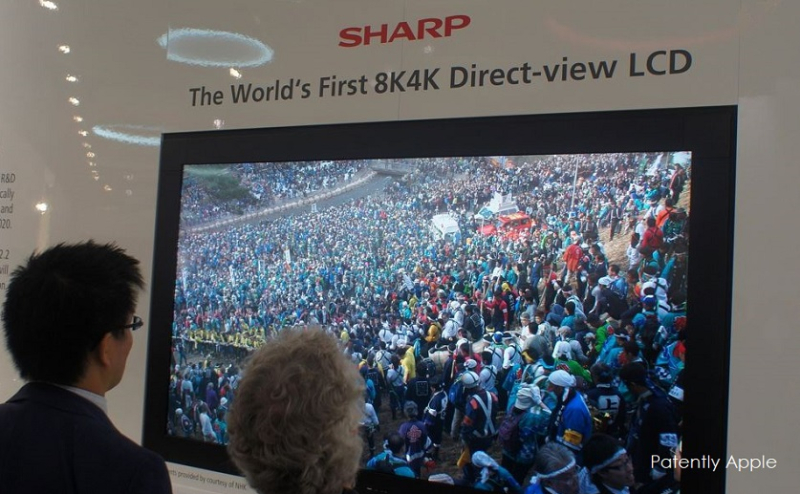 In July Patently Apple posted a report titled "Foxconn's Terry Gou Announces Plan for a $10 Billion LCD Plant in Wisconsin Hiring 13,000 Workers at $53,000/year." It was here where Foxconn's chairman revealed that the plant was going to make 8K TVs. In his speech he had noted that TV was invented in America and yet there were no more plants making TVs anymore. In the spirit of making America great again, Foxconn is going to lead the next-wave of TV technology in America. If some thought that making 8K TVs sounded a little too futuristic, think again.

Sharp has just unveiled its new Aquos 8K products, including 8K TVs and monitors, at IFA 2017 in Berlin and also simultaneously in Tokyo, Taipei, and Shanghai as the company is gearing up efforts to build up its 8K ecosystem.

The high-resolution 8K display products (7680 by 4320 pixels) will bring innovation applications to a wide range of industries and are expected to replace the existing 4K products, said Yoshihiro Hashimoto, managing executive officer at Sharp, during a press event in Taipei.

In addition to promoting the adoption of the new applications that will bring upon by 8K displays, Sharp and Foxconn Electronics (Hon Hai) will also jointly push the establishment of the related supply chain of back-end products such as chips, camcorders, cameras for the 8K ecosystem, according to Kay Chiu, president of Foxconn's TV business group.

Sharp will begin to market its household-use 70-inch 8K TVs in Taiwan in February 2018, Chiu revealed. However, pricing for the 8KTVs has yet to be available.

Sharp said it plans to introduce 8K TVs into the Chinese market this October, Japan two months later and then Europe in March 2018.

Sharp will also continue to develop other 8K products, including 60-, 65- and 80-inch TVs and large-size display devices, Chiu added.