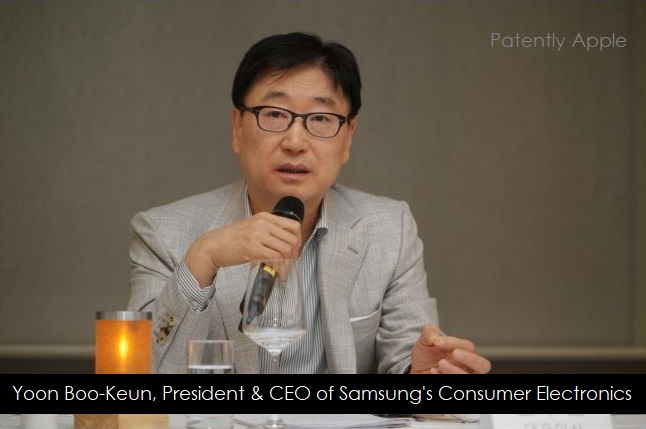 On Wednesday Patently Apple posted a report titled Samsung's Vice Chairman Tells Employees not to get mired in Shock & Confusion over Last week's Verdict. While management was telling staff to remain calm, Samsung sang a different tune in public at the IFA show in Germany yesterday.

Amid mounting uncertainty over the future of Samsung, with its de facto leader Lee Jae-yong in jail, the world's largest chip and handset maker has recently lost a business opportunity to acquire an artificial intelligence technology company, said one of the top brass of the company late Thursday. This revelation is shocking to have been made public and is likely a precursor to the company taking legal steps to side step Chairman Lee's authority while he's imprisoned.

In a rare speech, Yoon Boo-keun, president and CEO of the consumer electronics division of Samsung Electronics, expressed concerns about the unprecedented leadership vacuum within the tech giant, stressing that he feels like he is sailing without a captain.

"While the IT industry is going through tremendous transformations, we are facing significant difficulties in steering the wheel by filling up the absence of the 'captain of our fleet,'" Yoon told Korean reporters covering a consumer electronics show in the German capital.

"'Each head of the four business divisions -- device solutions, mobile communications, consumer electronics visual display -- are having a hard time in terms of structural restructuring and mergers and acquisitions," he said.

Lee's absence deals a serious blow to the tech giant, as the heir holds the ultimate key in making final decisions for crucial matters including M&As and corporate restructuring, Yoon said.

"Some say that the owner's absence doesn't mean a lot to global Samsung, but that's not true. It feels totally different when you actually do the management from watching it from the outside ... Important decision-making is being stopped, including the restructuring of businesses, because it is difficult for a division chief to make decisions on large M&A projects," he said.

"Either for a company or a family, ownership is the most important," Yoon said. "What has made today's Samsung was the ownership."

Samsung has also given up on an M&A project regarding the AI business, said Yoon without elaborating.

"It is not right to say that the project fell apart due to the leadership vacuum, but it's how you interpret it," Yoon said. "Doing a business is a matter of timing. I'm not allowed to reveal details of the project, but please understand it as that we missed the right timing."

Yoon is one of four CEOs of Samsung Electronics' divisions and a boardroom member.

Sharing his encounter with jailed Vice Chairman Lee, Yoon said that the heir was worrying about Samsung's global status.