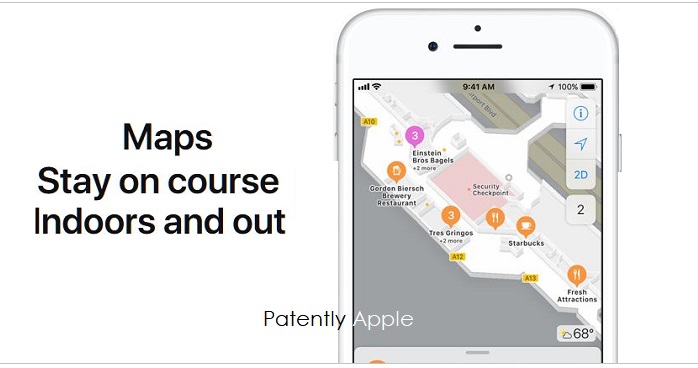 Apple's iOS 11 introduces indoor maps for the first time. Whether you're going on a new adventure or just searching for the nearest coffee shop, Maps makes all your journeys smoother. From indoor maps to lane guidance arrows, it's easier than ever to get around.

Apple notes that with iOS 11 you're now able to see "detailed maps of major airports and shopping centers around the world. Find out which restaurants are past security at the airport or which stores are on level three of the mall." 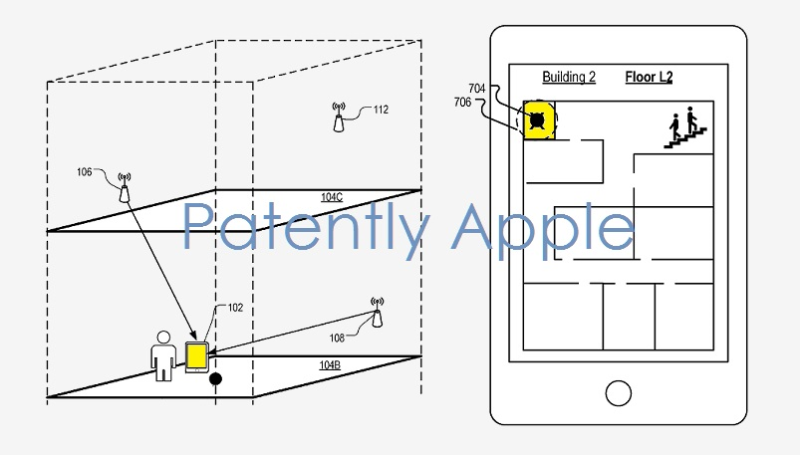 With the introduction of indoor maps, Apple fulfills a number of patents on this technology front. Apple acquired WifiSLAM back in March of 2013 which seemed to kick start their journey into developing indoor maps for iOS and four and half years later its finally begun to roll out.

Our archives on maps presents a number of patents on indoor mapping. One in particular was covered in 2016 titled "Apple Indoor Mapping Invention Automatically Determines the Mall Floor a user is on and Updates the Floor Plan," which is something that Apple is now marketing. One of the patent figures from that patent is noted above.

A second patent on indoor mall mapping was covered in December 2015 with one of the patent figures noted below (click on image to enlarge).

Indoor mapping was a category that Patently Apple has been tracking since 2013 and it's great to see that it panned out as a viable new service in iOS 11. Once again, more patents fulfilled.

Patently Apple not only covers Apple's patent applications and granted patents weekly but also takes the time to point out emerging trends from a patent perspective. You can find these trends listed in our categories section in our left side bar. Some of the trends listed include Augmented Reality, Wireless charging, Projection, flexible displays and yes indoor mapping, all ahead of products coming to market and well ahead of industry rumors. The latest trend to emerge over the summer covers advanced Audio, with the latest patent in that trend being posted just yesterday.