A new study published this week shows that Gen Z (18-24) and Millenials (25-34) choose Apple iPhones and Apple Music's paid audio subscription services. These two demographic groups are the power users when it comes to listening to music every day with 9 in 10 tuning in.

Only 25% of Americans pay for at least one music subscription service and Apple is their number one choice with Spotify slightly behind them as noted in the Fluent study report chart below. 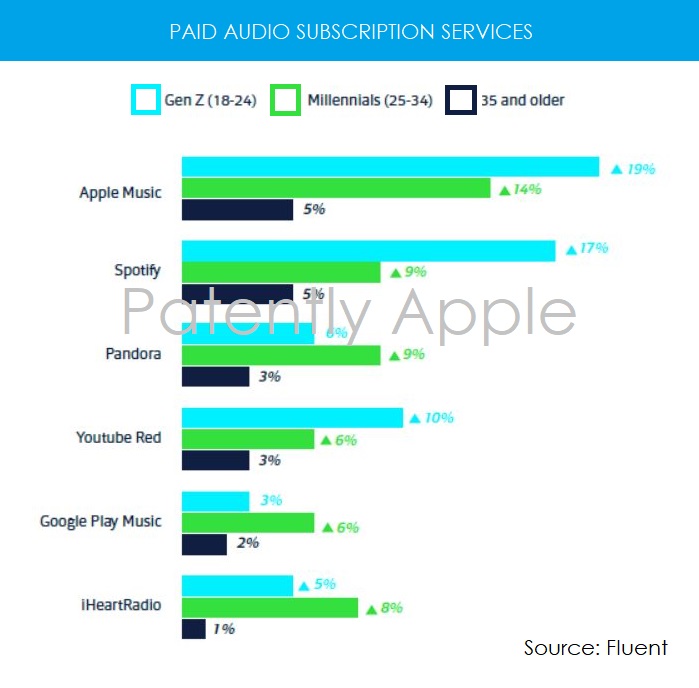 Fluent's content marketing lead Mary Lister notes in her report that "Because Apple is the preferred device brand for Millennials and Generation Z, and there is a propensity for Apple users to stay within the iOS ecosystem. In line with this, Generation Z is much more likely to subscribe to Apple Music than their older counterparts.

As we see the vast spending power of Generation Z and millennials come to a head through music consumption, we expect to see more industries turned to gold, platinum, and silver by the burgeoning tech wizards."

With only 25% of Americans paying for a music streaming service you can understand why Apple's head of Apple Music Jimmy Iovine has been pounding the table for some time now making the case that the freemium music business model is bad for music artists everywhere. At the moment, Iovine appears to be a lone voice in the wilderness.

Iovine has said that "Free is a real issue. This whole thing about freemium, maybe at one time we needed it. But now it's a shell game."

That's a dig at Apple Music competitor Spotify, which offers its streaming service as both a paid subscription and a free tier with advertising. "These companies are building an audience on the back of the artist."

Iovine added that Apple could easily amass hundreds of millions of users if it were willing to offer a free tier for Apple Music. But considering the service as it is now, he thinks he and the company have "built something powerful enough that it will work."

With Apple building a new level to their service with TV and movie content over time, it's a way to move adults 35 and older into Apple Music's subscriber base. At the moment it's clearly the weakest demographic as noted in the Fluent study chart below, but it's one that is willing and able to pay for premium entertainment while gaining the Apple Music service as part of the package.