Yesterday Patently Apple posted a report titled "Apple's Face ID has been in the work for many Years and its Debut fulfills many In-Depth Camera Patents." The 3D depth camera technology was derived from Apple's Israeli acquisition of PrimeSense and a number of their patents pointed to 'a pattern of light spots being projected onto an object with accompanying graphics supporting that visual. In today's report we cover two more patents that came to life with the introduction of the iPhone X. One is about the use of liquid metal and the other about Apple's use of flexible OLED in order to maximize the active display  area and decrease the bezel.

During Apple's iPhone X video presentation by Jonathan Ive we were shown that it's new flexible OLED display goes right to the top edge of the iPhone and then curves underneath the face side to ensure that it covers the face of iPhone X to the max. Our cover graphic noted above illustrates this technical feature.

Two of Apple's patents cover this very matter regarding 'border reduction techniques.' Apple's July 2016 patent states: "To minimize the amount of the inactive border area of display #14 that is visible to a user, one or more edges of display may be bent. As an example, the edge of the display to which a display driver circuit is mounted using a chip-on-flex arrangement may be folded under the active area of the display. An illustrative display with a bent edge portion is shown in FIG. 5" 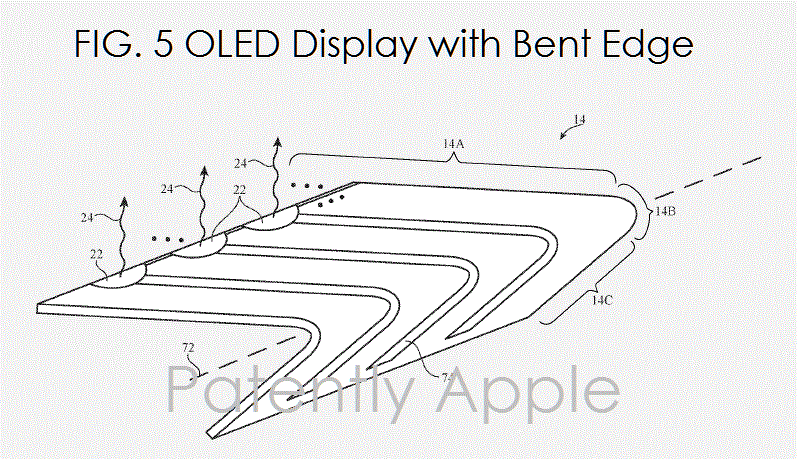 In another Apple patent they cover techniques to reduce a display border in respect to an OLED display. Apple notes that Flexible display technologies offer alternative reduction techniques, including permanent bending of outlying display areas to reduce planar surface area as seen from a vantage point in front of an assembled display. 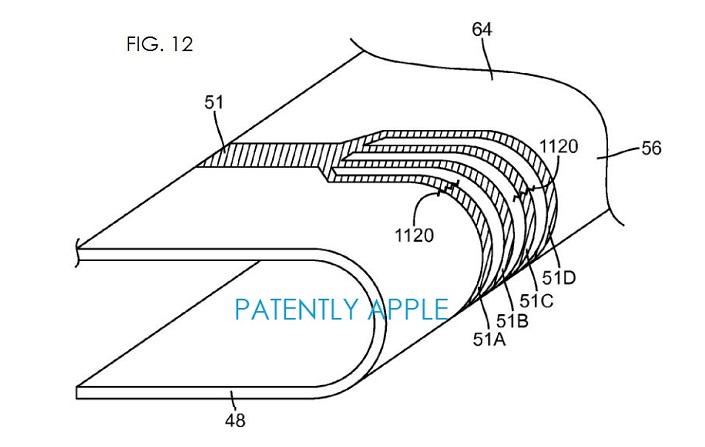 An iPhone with a Liquid Metal Back Side 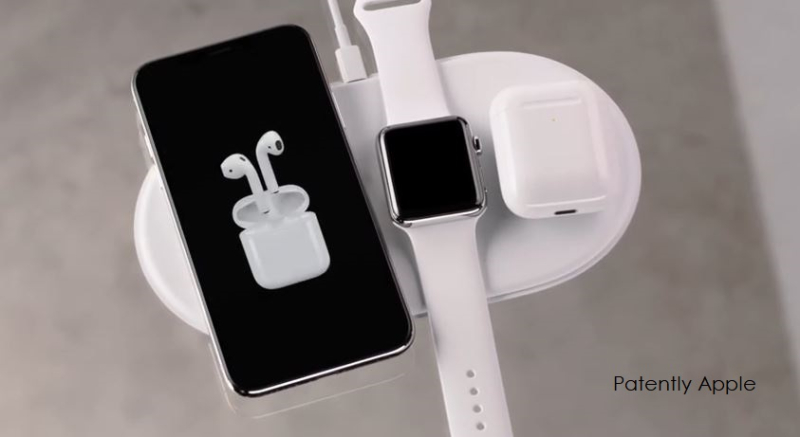 Technically a new glass formulation automatically rang a bell that this could mean the use of liquid metal which is really a forumlated metalic glass. And luckily we covered a patent to confirm that to high degree of certainty. Back in March Patently Apple posted a report titled "Apple Patent Describes using Liquid Metal (Metallic Glass) for the Backside of an iPhone." It's extremely rare that liquid metal patents provide a specific application in a patent figure. It's usually widely generic. The patent figure below leaves no room for doubt. 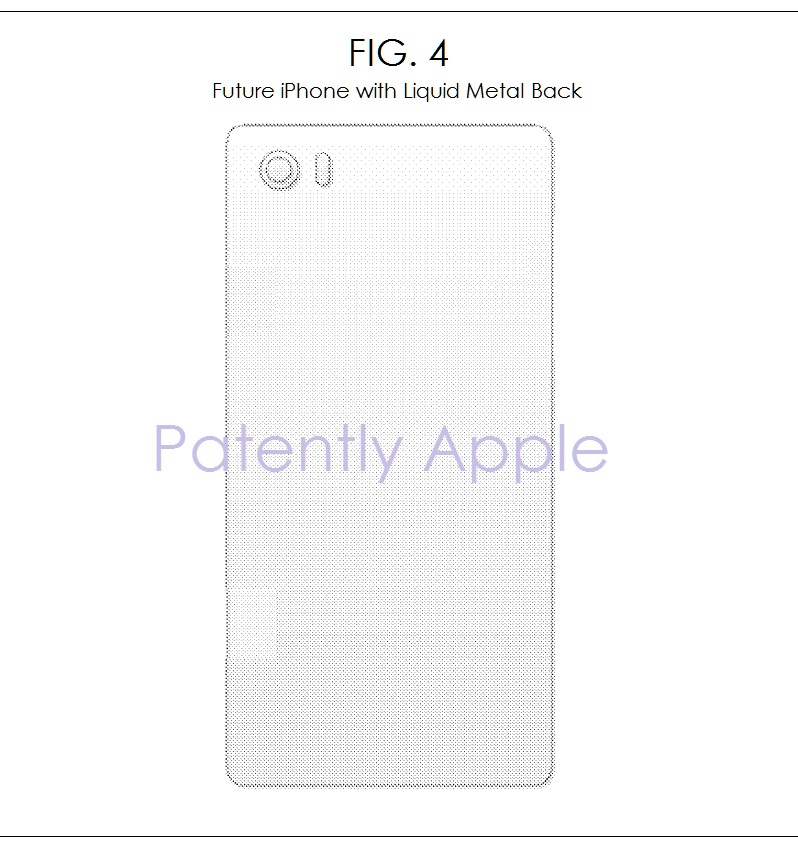 Apple's liquid metal patent only gave one product Apple would use if for and it was for a glass backside of an iPhone. So this is another patent fulfilled. And while we're on liquid metal for the iPhone X backside, it could be that another liquid metal patent came to life as well with the backside Apple logo being integrated into the liquid metal back as noted in our January 2017 patent report.

With every new feature that Apple introduces in every new device there is a matching patent supporting it, even if Patently Apple never covers it in reports. Apple is the number target of patent trolls around the globe and knowing that, Apple patents every imaginable part of a device from a specialize bolt, to circuits, cameras, batteries, displays and so forth.

Patently Apple only cover about 10% of Apple's patents which are generally their higher profile inventions. The others are of course important, but reading them is like watching paint dry. Apple also makes it very difficult at times to identify a new technology in a new product that's in sync with a patent because key aspects of the new device are using new branding or trademarked terms that the patent never used.

Sometimes I'm able to detect some common ground, but most times not. For instance, Apple mentions that they've redesigned their camera with improved telephoto capabilities. Patently Apple covered an advanced telephoto lens patent back in September 15. Yet it's difficult to assess if this is the patent supporting the new advancements. Of course patent sleuths can always use our archives to check out features to see if there are more matches to be found. Our archives are listed in the left sidebar of our site.

In the end it's always fun to be able to find a few of Apple's patents come to life in each Apple product cycle. Every hyped up Apple rumor-guru misses some of the finer technologies that Apple patents and we're glad to play a role in the Apple news ecosystem pointing them out week in and week out, year in and year out.