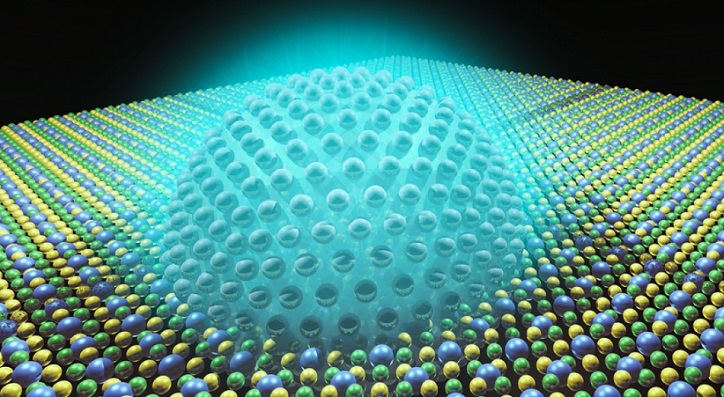 State of the art displays for phones, tablets, computers and televisions utilize glass substrates with thin-film transistors (TFTs) to control transmission of backlight through pixels based on liquid crystals. More recently emissive displays such as those based on organic light emitting diodes (OLED) have been introduced because they can have a faster response time, and be more power efficient, allowing each pixel to be turned off completely when displaying black or dark colors. Even more recently, quantum dot light emitting diodes (QD-LEDs) have been introduced as an alternative display technology, potentially being more power efficient than OLEDs.

Quantum dots are semiconductor materials where the size of the structure is small enough (e.g. less than tens of nanometers) that the electrical and optical characteristics differ from the bulk properties due to quantum confinement effects. For example, the emission properties of quantum dots are related to their size and shape in addition to their composition. 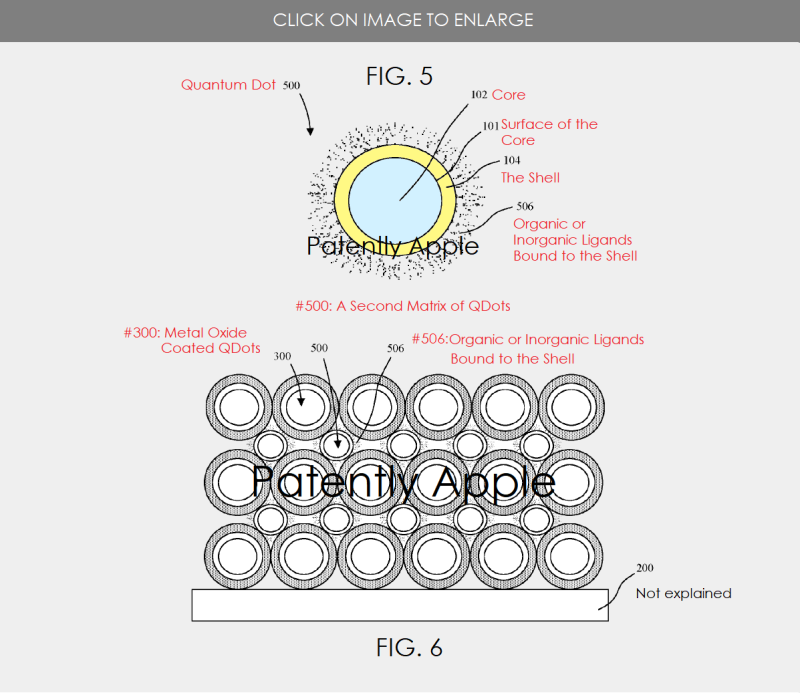 More specifically, Apple notes that in patent FIGS. 5-6 we're able to see a QD layer that may include a second matrix of QDs 500 dispersed in a first matrix of QDs 300. As shown, the QDs 500 of the second matrix may be smaller than the QDs 300. Additionally, the QDs 500 may include organic or inorganic ligands 506 bound to the shells 104 of the QDs 500. In an embodiment, a QD layer including a mixture of semiconductor core-shell QDs 100, 500 with metal oxide coated QDs 300 may create spacing between QDs to mitigate or eliminate FRET. Such a mixture may additionally create carrier trap sites (e.g. charge trapping sites on the emitter for electrons and holes) on the QDs 100, 500, which may enhance QD excitation in the device.

In another aspect, the metal oxide coatings may be a material system that is QD-LED device compatible. In accordance with embodiments, the metal oxide coatings may create a charge transporting matrix that may have the effect of increasing a recombination zone. As a result, device efficiency and lifetime may additionally be extended. A variety of metal oxide materials may be used based on band gap and band position relative to surrounding layers within a QD-LED device.

Obviously this is a complex filing that engineers in this field will understand far better than us mere mortals. For them and anyone brave enough to review then entire filing can here.