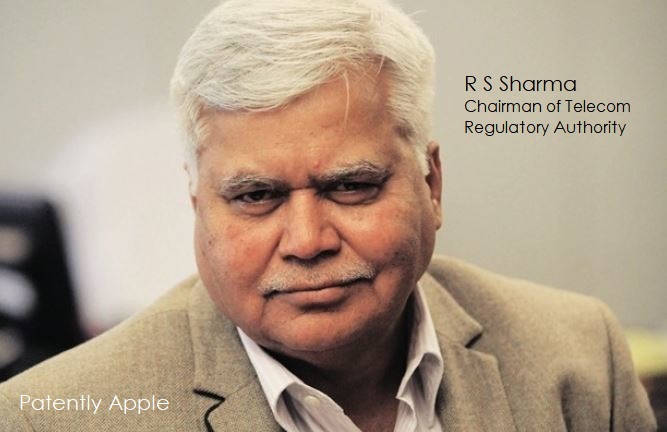 Last month Patently Apple posted a report titled "The Chairman of India's Telecom Regulatory Authority Accuses Apple of being 'Anti-Consumer'." The report noted that Telecom regulator TRAI has accused Apple of engaging in "data colonization" in India and being "anti-consumer" by not allowing customers to pass on details about pesky calls and unwanted messages to authorities as well as their mobile operators. The matter has remained unresolved over the last year and has now led to an attack on Apple by R S Sharma, chairman of TRAI (Telecom Regulatory Authority of India).

Today Bloomberg reports that "The Telecom Regulatory Authority of India has been trying unsuccessfully to get its Do Not Disturb software included in the App Store. The program lets people share spam call and text message logs with the agency, which uses the data to alert mobile operators to block the spammers. Apple has said the app violates its privacy policy, according to the regulator.

The standoff could impact Apple's efforts to expand in India, where half a billion smartphones will be sold by 2020. The Cupertino, California-based company has been in discussions with India's government to open retail stores and secure permission to sell used iPhones imported into the country. Apple has put forth a long list of demands, including tax breaks and other concessions, to set up manufacturing facilities.

Ram Sewak Sharma, chairman of the Delhi-based telecom regulator has said that 'Nobody's asking Apple to violate its privacy policy. It is a ridiculous situation, no company can be allowed to be the guardian of a user's data.'

Any new measures could affect not just Apple, but Facebook, Google and other technology companies that handle large amounts of private and personal information."

The report noted that "Amidst growing political tension with China and reports of data leaks by Chinese phones, the Indian government is reviewing its Chinese import regulations to rule out any possibilities of a data leak. To this end, the Indian government has asked mobile phone manufacturers to outline the procedures and processes they adopt to ensure data security and privacy of users. ET Telecom also covered this story with different information about the issues.

While the issue with the Chinese vendors is a little different than the one related to Apple, the two crackdowns on tech companies in India is showing the growing anger the government is having trying to control tech company's methods of collecting data in India or not cooperating with the government. 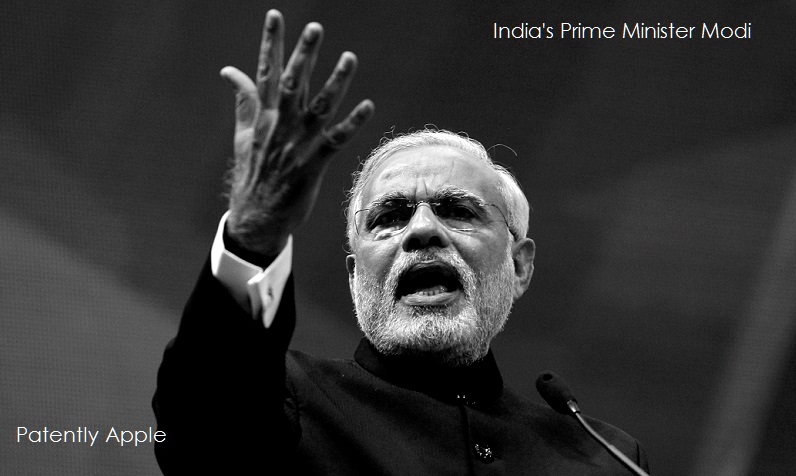 Last year the big issue was trying to force tech companies to adopt a new biometrics program designed by the government. A year ago this month Patently Apple posted a report titled "India Demands that Apple Devices be Embedded with New Government Biometric Security System."

Our report at that time noted that the new Indian Government initiative was part of a national biometric identity program called Aadhaar (Hindi for foundation). Millions of Indians use fingerprint and iris-scan authentication to access a range of public and private services that now includes banking. Failure to join the effort could limit the tech industry's access to a vast and growing market, but companies like Apple and Google are expected to resist opening up their phones and operating systems to the Indian registration, encryption and security technology.

On one hand India is begging for tech companies like Apple to come to India and create jobs while on the other hand taking every measure to avoid cooperating or negotiating a quick agreement to allow Apple's manufacturing partners to bring in electronic parts tax free until Chinese suppliera set up shop in India. It's a case of what comes first the chicken or the egg. And for now, India is simply refusing to play ball.

On the other hand, Apple doesn't seem to be in any rush either being that the average smartphone is selling for close to $200, a market they don't play in.

Though in the bigger picture, Apple is being patient. In July Patently Apple posted a report titled "Apple is Designing their Largest Retail Stores ever for India with Enough Class to make them Tourist Attractions." So hopefully there's a light at the end of the tunnel that's not an oncoming train.