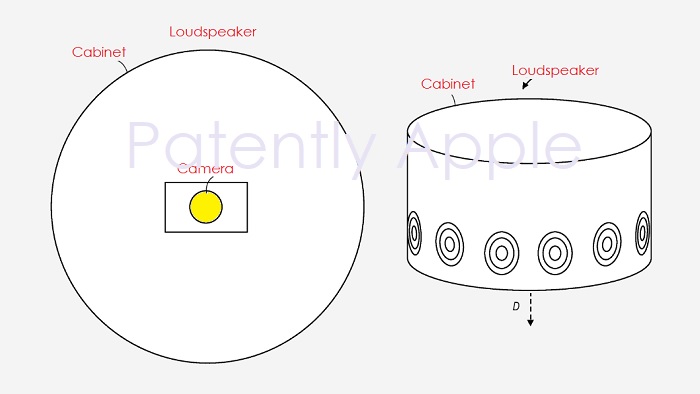 Patently Apple created a new 'Audio Related' category in our patent archives last week because of a barrage of new audio patents surfacing after Apple announced their new HomePod. We create new categories when we recognize a new trend emerging in Apple's Intellectual Property. Today the US Patent & Trademark Office has published yet another new round of audio patents. The first of two patents published today is titled "Method to Determine Loudspeaker Change of Placement." Today's patent application covers a system and method for determining whether a loudspeaker device has relocated, tilted, rotated, or otherwise been moved such that one or more parameters for driving the loudspeaker may be modified and/or a complete reconfiguration of the loudspeaker or the loudspeaker system may be performed.

Loudspeakers are often used by computers and home electronics for outputting sound into a listening area. Each loudspeaker may be composed of one or more transducers that are arranged on a single plane or surface of an associated cabinet or casing. To properly direct sound at one or more listeners, these loudspeakers must be manually oriented such that sound produced by each loudspeaker is aimed as intended. This orientation may include applying particular drive settings or other configuration parameters for each of the one or more transducers in the loudspeaker. For example, a loudspeaker may be initially oriented and configured such that corresponding transducers produce a sound beam directed at a listener. However, any movement of the loudspeaker may require 1) manual adjustment of drive settings or 2) a complete recalibration of the system such that the generated sounds are again properly aimed at the target listener. Accordingly, in these traditional systems, the listener must manually determine that one or more of the loudspeakers has moved such that recalibration and or adjustment may be performed. This repeated manual determination of movement and corresponding adjustment may become time consuming and may provide a poor user experience.

Apple's Invention relates to a system and method for determining whether a loudspeaker device has relocated, tilted, rotated, or changed environment such that one or more parameters for driving the loudspeaker may be modified and/or a complete reconfiguration of the loudspeaker or the loudspeaker system may be performed.

In one embodiment, the system may include a set of sensors integrated or otherwise in communication with a loudspeaker. In one embodiment, the sensors may include one or more of a video camera, a still image camera, a compass, an accelerometer, a light sensor, a wireless antenna, a thermometer, current/voltage monitor, a microphone, a gyroscope, and barometer/pressure monitor. In other embodiments, other sensing devices may be integrated or otherwise in communication with the loudspeaker.

Upon determining that the level of movement is below a threshold value, the system and method attempts to adjust previous parameters used to drive one or more of the loudspeakers.

By adjusting previous parameters instead of performing a complete recalibration, the system and method provides a more efficient technique for ensuring that the loudspeakers continue to produce accurate sound at the location of a listener despite small movements/changes. 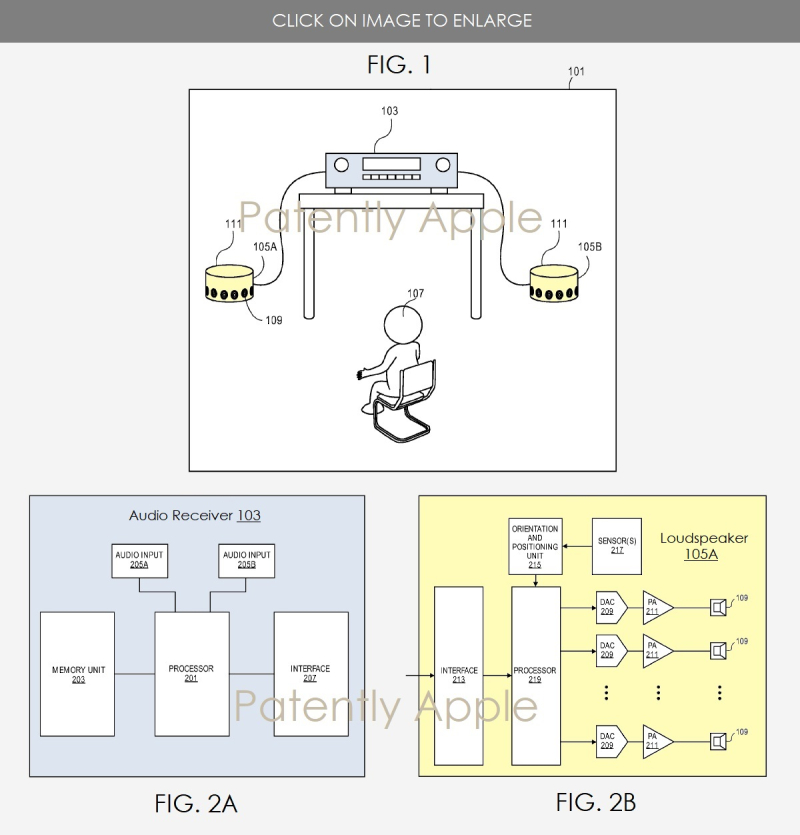 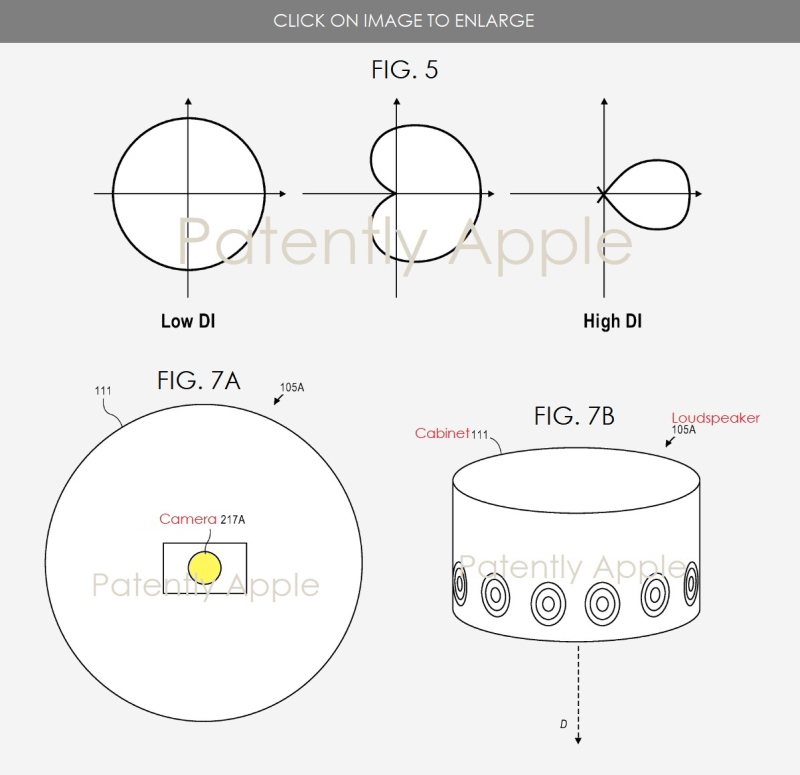 Apple's patent FIG. 5 shows a set of directivity patterns that may be generated by a loudspeaker.

Further, Apple notes for patent FIG. 5 that the loudspeaker 105A (seen in FIGS. 7A and 7B above) may be associated with a set of parameters for driving its transducers (#109 of FIG 2B above) to produce beam patterns or other sound formations. The parameters may for example define the relative phase (or delay) and relative gain of the digital transducer drive signals (e.g., as computed by a digital beamforming process to obtain one or more beam patterns that are produced by the loudspeaker 105a), which drive the transducers respectively.

Beamforming plays a role in Apple's HomePod. Apple's marketing material notes that "HomePod has a unique array of seven beamforming tweeters that precisely focus the sound, from very narrow beams all the way to true, consistent 360º audio. By aiming those beams throughout the room, the tweeters create an immersive sense of space — no matter where HomePod is placed or where you're sitting."

Further, Apple's A8 chip integrated into HomePod is, according to Apple, "The biggest brain ever in a speaker." Apple adds that "An Apple-designed A8 chip powers the most complex audio innovations in HomePod – like real-time modeling of the woofer mechanics; Buffering that's even faster than real time; Upmixing of both direct and ambient audio; Beamforming so the microphone can hear you over the music; and advanced echo cancellation so that you get amazing sound without even thinking about it."

Apple's patent FIG. 7A above illustrates what could either be a still image camera or video camera affixed to the loudspeakers 105A for determining movement and/or reorientation of the loudspeaker.

The captured images may be compared to each other, to determine if the loudspeaker 105A has moved to a new location (e.g., moved since operation 601). These comparisons may utilize pattern recognition/matching techniques to reveal movement. For example, an identified pattern in the wood grain of a hardwood floor captured in a first image at operation 601 may be located on the far right edge of the first image. In contrast, the same pattern captured in a second (subsequently capture) image at operation 609 may be located on the center of the second image.

This apparent shift in the pattern may indicate that the loudspeaker #105A has moved to the left between operations #601 and #609 noted in flow chart presented in FIG. 6 below.

Apple's patent FIG. 6 below shows a flow chart of a method for configuring a loudspeaker based on detected movement and/or changes to the environment of the loudspeaker. 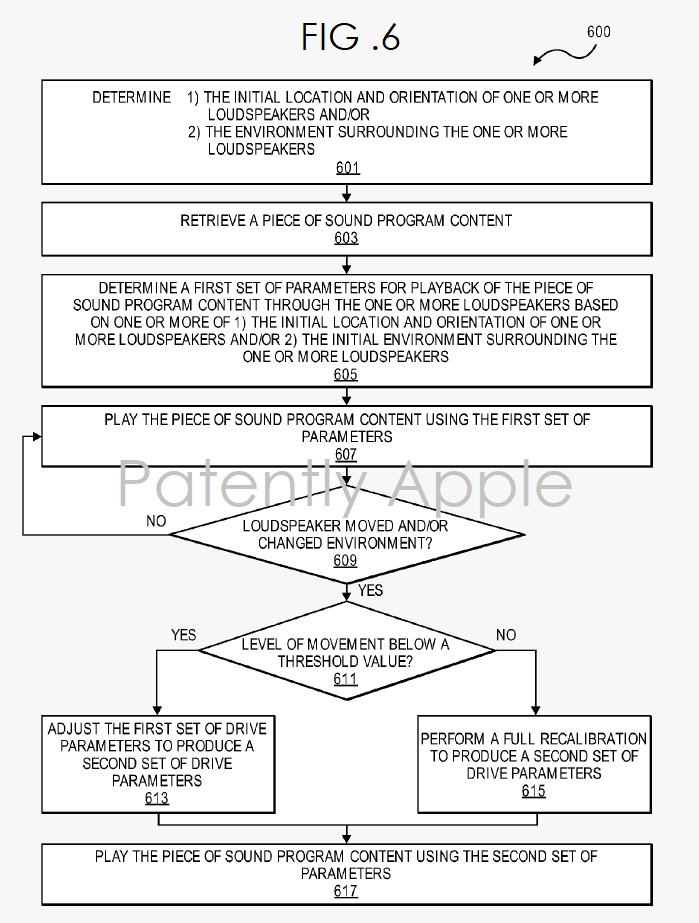