Patently Apple posted a report back in February titled "Apple Invents New Cracked Cover Glass Sensors to Assist Apple Design Better Crack Resistant Glass and More." We noted in our February report that in 2015 Motorola had conducted a survey relating to cracked smartphone screens. The results found that 50 percent of people globally have experienced a cracked smartphone screen at least once. Interestingly enough the U.S. had the smallest overall percentage at 34 percent while India had the highest with 65 percent.

Yesterday Apple's second invention covering the detection of fine cracks in a mobile device display surfaced at the U.S. Patent Office. New approaches to the problem are presented in this invention and the ultimate solution is to create a communication system that notifies the user of the extent of the display damage with instructions to either contact Apple or a local carrier about repairs. In some cases the notification could also be sent to the user's Mac should the message sent to their iDevice fails to be delivered.

The cover glass of an iDevice may crack or break when the cover glass impacts a surface, such as when the device is dropped. This kind of damage may only be recognized by visual inspection. If the user of a device does not notice the damage, the user may continue using the device without seeking repair despite risk of further impairment to the device related to the damage.

In some implementations, the electronic device may be configured (for example, by including and/or activating one or more communication components) to transmit information regarding a crack, break, or other damage (collectively, "cracks"), or detection of a crack to another electronic device. 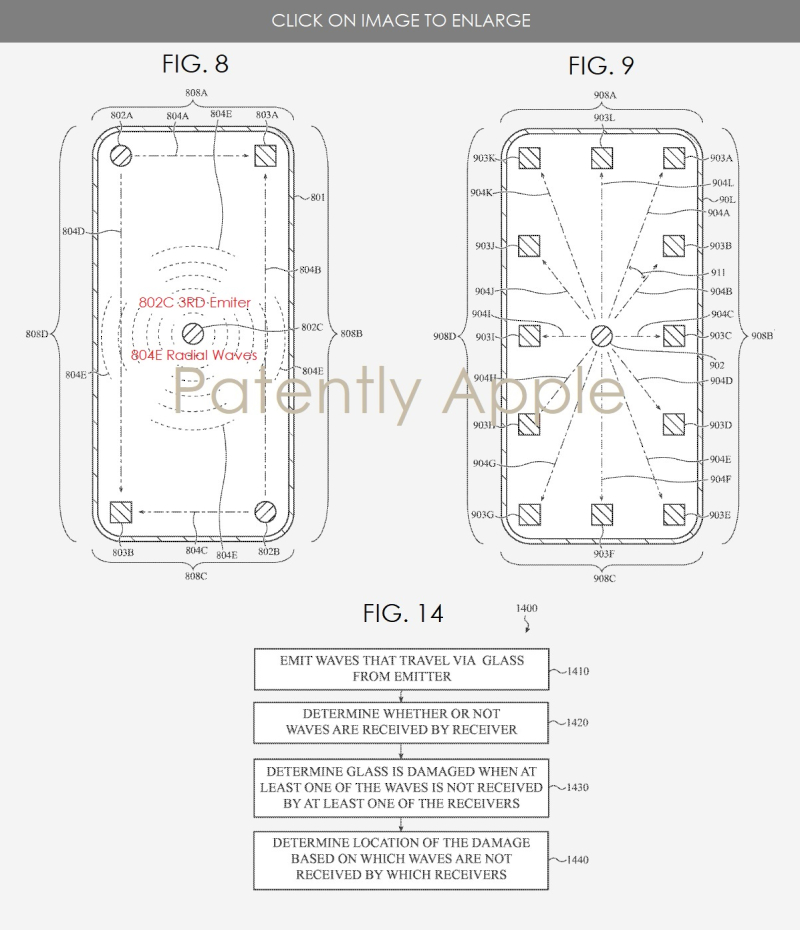 More specifically, Apple's patent FIG. 8 depicts a schematic cross-sectional view of a second example configuration of components that may be used in an electronic device to detect damage to a cover glass. FIG. 8 includes multiple emitters 802A, 802B that emit multiple waves 804A, 804B, 804C, 804D or other signals that travel through the cover glass and are received by multiple receivers 803A, 803B or other sensors.