Samsung Remains the King of Smartphones for Q2 2017, based on the useless Volume Shipments Metric

Yesterday Patently Apple covered the opening statement by Apple's CEO on their fiscal Q3 results. Regarding the iPhone, Cook stated that "iPhone results were impressive with especially strong demand at the high-end of our line-up. iPhone 7 was our most popular iPhone and sales of iPhone 7 Plus were up dramatically compared to iPhone 6 Plus in the June quarter last year. The combined iPhone 7 and 7-Plus family was up strong double digits year over year."  Today it's being reported by Strategy Analytics that Samsung maintained their leading position in smartphone market share globally based on volume shipments. But does the volume shipments metric alone really reflect smartphone market leadership?

Today it's being reported by Strategy Analytics that Samsung maintained their leading position with 22% of global market share.

In general, the Strategy Analytics report noted that global smartphone shipments grew 6% year over year to reach 360 million units in Q2 2017. Apple was second with 11% market share and Xiaomi surged 58% annually to rejoin the top five vendors for the first time in a year.

Apple grew 1 percent annually and shipped 41.0 million smartphones for 11 percent market share worldwide in Q2 2017, down slightly from 12 percent a year ago. Apple's iPhone has gone out of fashion in China and this is placing a cap on its worldwide performance. Attention will now turn to Apple's rumored iPhone 8 introduction later this year and whether its tenth-anniversary flagship model will be different or exciting enough to ignite a rebound in iPhone volumes for the important Q4 2017 Western holiday season." 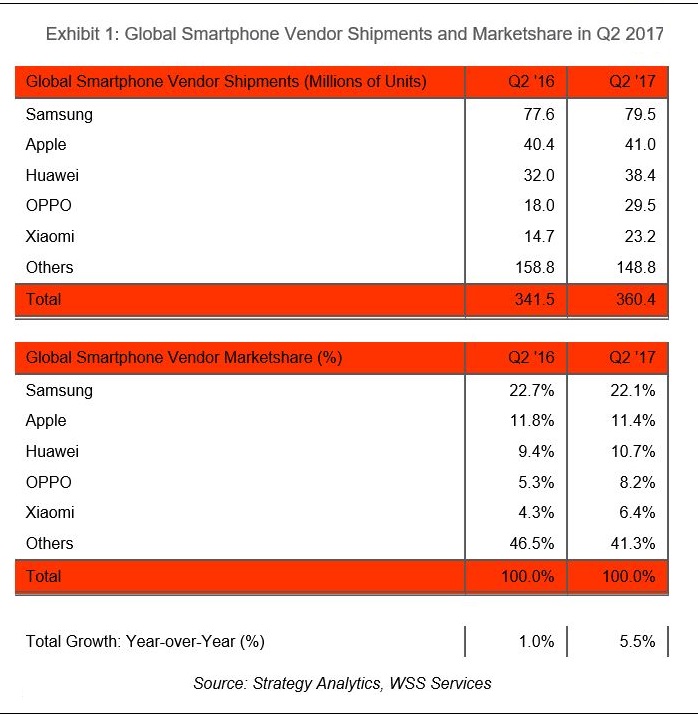 IDC's report was also published today and you can review their report here. They reported that Apple had a slightly higher market share at 12%.

The only stats that matter to Apple and shareholders aren't presented in these reports. Which smartphones made the top premium list globally and which company made the most profits? For instance, in China, Apple's iPhone in Q1 was the best selling smartphone. In fact, the iPhone 7 took the top four spots while overall Apple was only in the #4 position overall based on 'volume shipments.' The same is likely occurring again this quarter because Apple's CEO made it clear that the Phone 7 line-up showed strong double digit growth.

So while Apple looks like a distant #2 to Samsung in smartphone volume shipments globally on paper, Apple's few top iPhones are likely to have been the top sellers in the world that also made the most profit. In Q1 Apple took 83.4% of smartphone profits showing that being #1 in volume shipments alone is a useless statistic.

As far as Samsung breaking profits record this quarter, it had nothing to do with their smartphones but rather their global memory chips business and OLED display sales to Apple.