Home Archives Contact Us Subscribe Twitter MeWe Facebook Patently Mobile
Apple Targets Waukee, Iowa for their next Data Center that will be powered by Renewable Energy
Apple Informs Iranian Developers that they can't distribute their apps on the App Store due to U.S. Sanctions 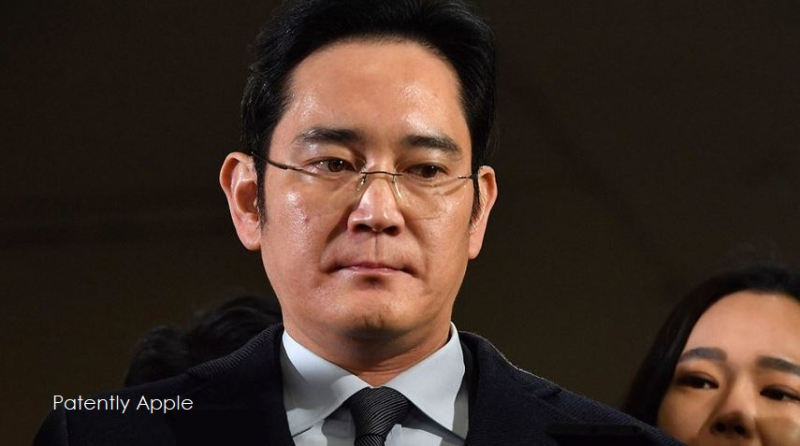 Today the guilty verdict on Samsung's de facto leader has driven the world's largest producer of smartphones and chips into a deeper quagmire. The court sentenced Samsung's Electronics Vice Chairman Lee Jae-yong to a five year jail term, finding him guilty on all five charges over his involvement in the corruption scandal that led to the impeachment the nation's former president.

The court acknowledged a special counsel's accusation that Lee and other executives were aware of President Park Geun-hye's close relationship with her friend Choi Soon-sil, though he did not specifically request Park to lift regulatory hurdles for his succession plan.

The heir apparent of Samsung returned to a detention center in Gyeonggi Province, where he had spent the last six months, to appeal his case.

Samsung officials, though holding their breath, said there would not be any drastic changes in the company's management for now, but raised concerns on the possibility of a leadership vacuum that could suspend the conglomerate's future strategies and investment plans.

Samsung Electronics has three CEOs who each run major business segments -- smartphones, consumer electronics and microchips. They are experts in their respective fields and have proven their leadership in each segment, but they lack the authority to make large-scale acquisition investments without the owner family's approval.

"Making decisions on investing in new businesses, for which the return on investments is uncertain, or pushing for large-scaled merger and acquisitions, cannot be done by the hired executives, as they are too risky," said a Samsung official, adding that these are the kind of decisions only Lee had been able to make.

Lee joining the boardroom last October was widely seen as the heir opening a new chapter for Samsung, and adding a modern management style to the tech empire that had been led by his father, known as a charismatic leader.

There were mixed views on Lee including whether he could change Samsung's DNA from a manufacturing company to a software firm while completing his father's unfinished plan of making Samsung a leader in bio and financial technologies.

Samsung was active in the M&A market, acquiring five companies, including Harman International, in six months last year. Since the bribery scandal that flared up late last year, Samsung's M&A drive has been losing steam. There have been market rumors on potential M&A cases, but the tech giant has remained silent.

While some say it would be difficult for the group to paint a big picture without Lee, chaebol reformists call it an opportunity to end the long-standing problems of the chaebol model -- the opaque corporate governance and transfer of control within a group's founding family, often involving illicit means.

Samsung has been devising the most efficient ways to consolidate the heir's control within the group's crown jewel that produces smartphones, computer chips and flat-screen TVs. Samsung Electronics contributes to nearly 75 percent of the group's total revenue.

"I don't think that Samsung will face a management crisis anytime soon because of Lee's absence. But uncertainty over Lee's hereditary succession will surely grow and this would put not only Samsung but other conglomerates under enormous public pressure to take legal and transparent steps in the course of their succession," said Park Sang-in, a professor at Seoul National University's Graduate School of Public Administration.

Lee's verdict also sends a strong warning to other chaebol families and conglomerates they control, as the new government has been pushing a reform drive to cut the decades-old back-scratching connection between politics and businesses.

It also signals stronger intolerance toward the collusion between conglomerates and the politics.

"What we hope from the trial is to root out the government's long-held practice of demanding money from conglomerates whenever they need," a source from one of the top five conglomerates in Korea. The source added that "If the companies disobey the government's request, it often responded by replacing the management, imposing taxes and investigating the firms through antitrust authorities." This is what has to end.

Patently Apple began covering this story back in January in a report titled "Samsung Heir Identified as Suspect in Bribery Case."