Home Archives Contact Us Subscribe Twitter MeWe Facebook Patently Mobile
Samsung Retaliates against Qualcomm for Switching to TSMC for 7nm Processors
Apple's iPhone 8 in China should revive Apple's Sales, though it could do better if it Offered WeChat 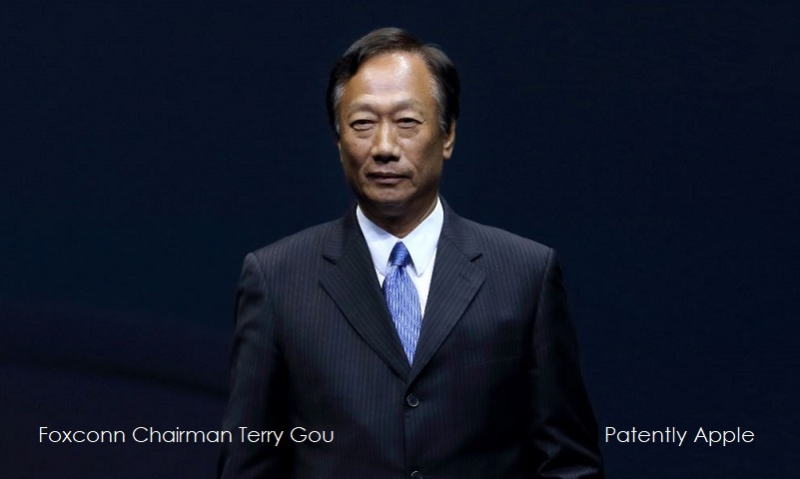 It's being reported today that Foxconn, the world's largest IT equipment supplier on consignment basis, is emerging as the biggest threat to the Korean semiconductor and display industries.

According to industry sources, Foxconn is nursing a scheme to transform itself into a general IT company through the acquisition of Sharp in Japan and Toshiba Memory. The Flying Eagle strategy, which Terry Gou, chairman of Foxconn recently announced in the U.S. is based on this blueprint. The Flying Eagle strategy aims to become the strongest player in the IT industry to maximize synergies out of US political and economic support, advanced Japanese technology, and Chinese manufacturing plants.

To this end, Foxconn is actively cooperating with the US on reviving the US manufacturing industry. The company is planning to scratch the back of Trump in the US by creating jobs, and to take advantage of America's influence in big issues such as the takeover of Toshiba Memory in Japan.

In July, Foxconn announced a plan to invest US$10 billion in an LCD panel factory in Wisconsin, the US. Wisconsin responded with a US$3 billion tax cut for the Foxconn factory. Foxconn also decided to continue investing in automobiles in Michigan, the US. Foxconn's moves are explicit courtship to strengthen a honeymoon with the United States, even if they take high labor costs. The Trump government bent on creating jobs has no choice but to welcome Foxconn's investment.

The problem is that Foxconn is openly showing its intent to hold Korean companies in check in the midst of these moves.

The situation is getting complicated as the acquisition competition took an unexpected turn. Toshiba changed its stance to have negotiations with Western Digital and Foxconn apart from SK Hynix. "If Foxconn succeeds in acquiring Toshiba Memory and makes a chicken game-like investment, the memory semiconductor market can fall into a serious turmoil," an industry official said.

If Toshiba were to win the bid for Toshiba it would allow Apple to eventually have a potential new supplier for memory products beyond Samsung.