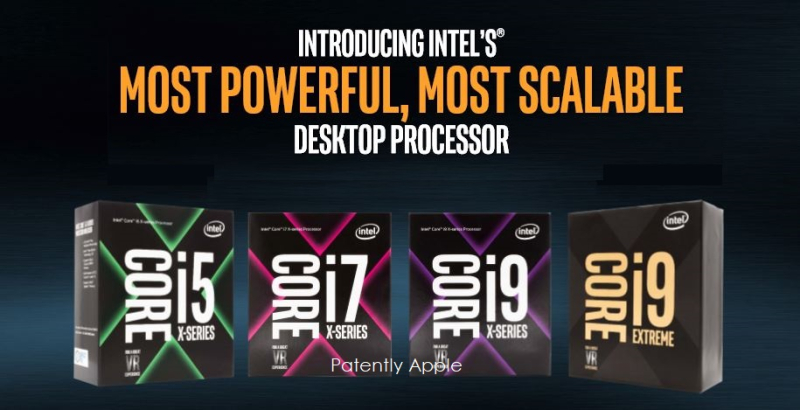 Last week Patently Apple posted a report titled "Apple's iMac Line-Up Misses out on new Intel 6-Core i7's." In that report I had noted that Apple is designing a new modular desktop that is likely to run a wider range of Intel processors in the next year or two, with this year's current iMac line-up being limited to only Intel Core i5 processors for mid-market players. Intel is reportedly to reveal new eighth generation 8600 and 8700 processors at Gamescom later this month. Intel today revealed economical 6 and 8 core i7's priced to position their line-up to better compete with AMD's Ryzen multi-core lineup. The list below also shows Intel's new lineup of i7 and i9 Core X series for Professional and extreme gamer markets. 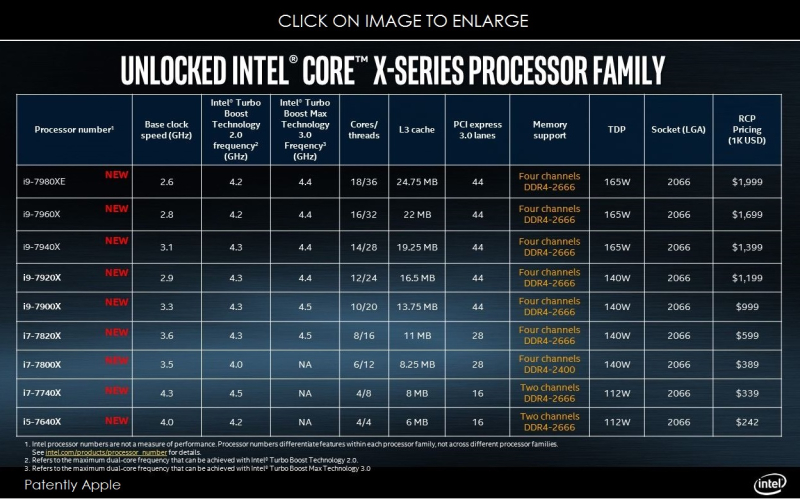 The new X-series processor family is the ultimate platform for content creators and gamers. Multitasking becomes extreme mega-tasking with simultaneous, compute-intensive, multithreaded workloads aligned in purpose, powered by up to 18 cores and 36 threads. And, with up to 68 PCIe 3.0 lanes on the platform, people have the ability to expand their systems with fast SSDs, up to four discrete GFX cards and ultrafast Thunderbolt 3 solutions.

Content creators can expect up to 20 percent better performance for VR content creation and up to 30 percent faster 4K video editing over the previous generation. This means less time waiting and more time designing new worlds and experiences. Gamers and enthusiasts will experience up to 30 percent faster extreme mega-tasking for gaming4 over the previous generation.

New multi-core processors are changing the landscape for desktops forever and with Intel shifting to 10nm processors for desktops late next year (notebooks this year), Apple fans may be in store for a dramatic shift in power with Intel's i7 Core line-up at that time.

For Apple fans who also run Windows PCs, the fun starts this fall. Intel's 8 core / 16 thread i7 – 7820X retailing at $599 is a much sharper price than most were thinking. Last year's i7 8 Core Broadwell sold for close to $1500. There's nothing like competition to help pricing drop back to earth.

AMD's Ryzen 1800X 8 core sells for roughly $460 so Intel's counter punch could hurt AMD who clearly had the early advantage up to this point in time. If push come to shove, gamers and pro's are likely to stick with Intel for the 8 core if they're close in price – as long as the benchmarks for the new 8 cores prove beneficial.