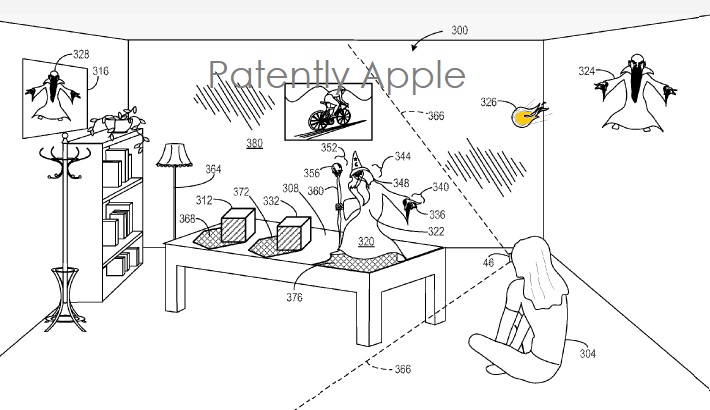 In early July Patently Apple posted a report titled "Apple and Microsoft are set to Face-Off for Market Leadership in Mixed Reality." In this follow-up report we take another look at the next battle between Apple and Microsoft. Without a doubt Apple delivering ARKit at their WWDC event in June blew developers and consumers away. It seemed as if overnight Apple had leapfrogged Microsoft's HoloLens. The Wingnut AR demo as presented below was a game changer. Apple's CEO stated afterwards in a Bloomberg / Businessweek interview in June that he's so excited about AR that he wants to scream.

At the end of July we posted a report titled "Insights into the Making of the Wingnut AR Demo at WWDC 2017 by Creative Director Alasdair Coull," where Coull described working with the Unreal Engine 4 to create their amazing demo that was able to run at 60 frames per second.

The battle for the consumer is going to be intense between Apple's iOS devices and Microsoft with their new HoloLens partners delivering new headsets. The advantage for Apple is that no accessory is needed out the gate to put Apple in the lead in the augmented reality market.

Yet a headset is going to make life easier for users to enjoy a game like Wingnut AR that requires a user to hold up an iPad or iPhone and move it around to see different environment angles; talk about 'Gorilla Arm Syndrome." The Gorilla Arm argument began with Apple's late CEO Steve Jobs which was then carried over by Phil Schiller and Craig Federighi. The idea of putting a touch screen on an iMac or MacBook was a mortal sin. But now users will have to hold their arms out like the demo above shows to play Wingnut AR and over time, it will seem like Gorilla Arm syndrome to those holding up their iPads for long periods of time.

Today Microsoft was granted a patent covering a similar type of concept of playing a future AR driven game with the advantage of using smartglasses; something that Apple is in fact working on at the moment themselves.

Microsoft's granted patent 9,734,633 titled "Virtual Environment generating System" covers a "system and related methods for visually augmenting an appearance of a physical environment as seen by a user through a head-mounted display device." For augmented reality fans the Microsoft patent is worth checking out, even if you're a die-hard Apple fan because aspects of what they're describing are likely to show up in Apple's smartglasses sometime in the not-too-distant future.

The Microsoft patent, for instance, talks about the headset including a depth camera which happens to be something that Apple via their PrimeSense team in Israel has been working on for years now and in fact was granted a patent for another aspect of that today. The HoloLens headset does or will use gaze controls according to their granted patent which is yet another field that Apple has been working on as well.

Our report's cover graphic illustrates Microsoft's patent figure 3 which represents an environment like the one used for the Wingnut AR demo with characters appearing on a table top. In Microsoft's example it's far more elaborate because their HoloLens accessory will provide their users with a much larger viewing area than the one limited with an iPad, so that other characters in the game can be designed to appear throughout a room or gaming environment with Microsoft's new system. The patent even ventures one step further by calling the environment in FIG. 3 a 3-D movie experience which kind of reminded me a little of the new ARKit demo with RoboCops roaming London. That's a demo we probably won't see on HoloLens any time soon.

So while Apple will have the instant win with AR software on more devices than any other OEM on the planet, Apple's AR/VR 3D glasses of one kind of another will definitely be needed to enhance the AR experience down the road so as to keep HoloLens at bay.

No matter what Microsoft tries to do on the hardware front, it's not being well received. Last week we posted a report titled "Consumers Reports Claims the Reliability of the Microsoft Pro Laptop is the Worst in the Industry by a Significant Margin." Ouch. And although Microsoft's VP of Surface and other devices Panos Panay has disputed their findings, the bad PR is likely to stick.

In the end the hype around Apple's AR on iOS this fall is creating a mega buzz ripple effect in the press, and it's destined to be a mega hit for Apple very shortly. Microsoft's venture into headset accessories for Xbox is barely getting any press and is likely to be dwarfed by Apple's AR hit this fall.

Just when Microsoft thought that they had something big over Apple, something that they could call their own, Apple stepped in with ARKit and destroyed that hope in a nano second. Who saw that one coming?

But like all good heavyweight tech fights, we're only in round one of a twelve round fight. Apple's ARKit could deliver a TKO for Apple this fall, but we'll pretend that it's going to be a fair fight and say may the best technology win.

The fun begins sometime in September and it's bound to be the keynote of the decade. Apple's late CEO changed the mobile world in a flash with the introduction of the iPhone in 2007 and new-Apple under the leadership of CEO Tim Cook is about to take us on a new leg of that mobile market journey with Augmented Reality; a journey that is bound to take us all to new realms that we never dreamt possible.

I can't wait for Apple's Keynote to begin.