Patently Apple has been reporting on Apple's long list of 3D depth camera patents for years that has on many occasions included the future use of hand gestures to control aspects of a device's user interface – be it iOS, macOS or even watchOS. In June we posted a report titled "Apple Working on a Future Hand Gesturing Interface to Control Gaming, Apple TV and Home Appliances." In January we posted a report titled "Apple Wins a Patent for a 3D Camera System for Controlling Games, Apps and Possibly Facial Recognition." That news was way ahead of reports talking about Apple's iPhone x using advanced facial recognition for almost instant authentication. Now we're learning that Apple is likely to add another exciting dimension to their next-gen iPhones with gesturing controls as part of replacing the Home button next month. While Apple has the technology, it's still unknown if they'll take gesturing to the next level and introduce in-air gesturing.

According to a new Bloomberg report, new gesture controls will in fact be introduced when the new iPhones debut. Gurman reports that "Apple Inc. plans to transform the way people use its next high-end iPhone by eliminating the concept of a home button and making other adjustments to a flagship device that's becoming almost all screen, according to images of the new device viewed by Bloomberg News and people familiar with the gadget.

Apple is preparing three new iPhones for debut next month. One of the models, a new high-end device, packs in enough changes to make it one of the biggest iPhone updates in the product's decade-long history. With a crisper screen that takes up nearly the entire front, Apple has tested the complete removal of the home button—even a digital one—in favor of new gesture controls for tasks like going to the main app grid and opening multitasking, according to the people and the images.

Across the bottom of the screen there's a thin, software bar in lieu of the home button. A user can drag it up to the middle of the screen to open the phone. When inside an app, a similar gesture starts multitasking. From here, users can continue to flick upwards to close the app and go back to the home screen. An animation in testing sucks the app back into its icon. The multitasking interface has been redesigned to appear like a series of standalone cards that can be swiped through, versus the stack of cards on current iPhones, the images show. For more on this, read the full report here.

At the moment, the gesturing may be limited to on-screen gesturing. Whether Apple takes it to the next level with in-air gesturing is still in question. In June Patently Apple posted a report about Apple's new iPhone X suppliers. One of the new suppliers is Lumentum. In the early moments of their promotion video they point to 'gesture recognition' as being part of their 3D sensing technology. So the technology is certainly in place for Apple to introduce it. Whether it will pan out this year is a hope but not a guarantee. 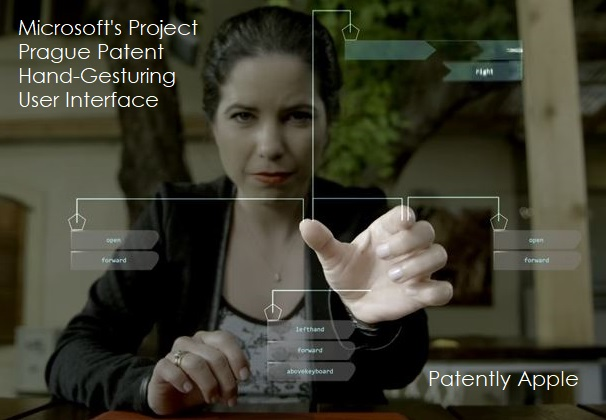 In July Patently Apple posted a report titled "Patents show Apple & Microsoft Racing to bring Hand Gesturing Systems to Computers, Home Appliances & more." Well, if the in-air gesturing actually pans out for Apple's high-end iPhone, and it's still an if, then Apple will have won that race with Microsoft. Winning races for both AR and in-air gesture controls will certainly justify that $1000 price tag to own the bragging rights to some pretty cool technology.

I think it's pretty safe to say that the air will be crackling when the iPhone keynote begins on September 12th. It's been a long time since I've been excited about an upcoming keynote and this one is definitely going down in Apple's history book as a rock'em sock'em event to kick off the holiday season smartphone wars.