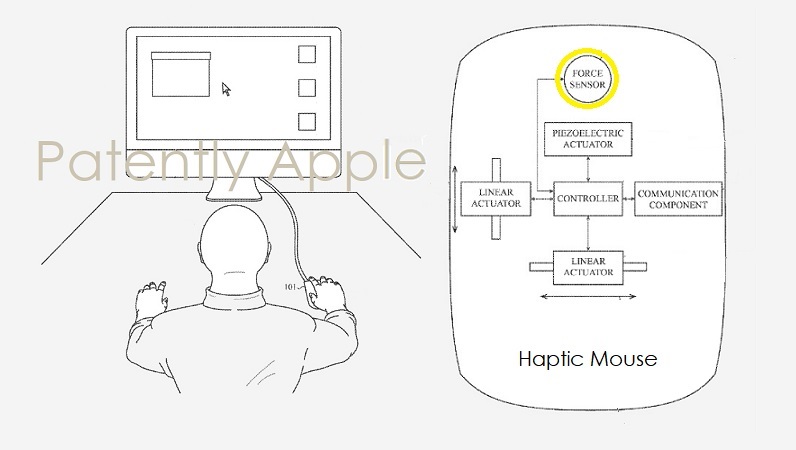 Looking at some of the last reviews of Apple's Magic Mouse 2 and at Apple forums, it's clear that haptics have never come to market as hoped for. In fact Apple's Magic Mouse 2 hasn't been updated in close to two years. Apple did bring force touch to their Magic Trackpad 2 but failed to extend that to their mouse, even though they've been a granted patent for force touch on a mouse since 2013 and another dating all the way back to 2009. In 2010 Apple showed us that they had big plans for their mouse and yet the Mac team, or should I say management, never followed through.

Today another Apple patent has come to light making yet more elaborate claims of what's to come for the Apple mouse. It's probably just more hot air, but you never know. With all these new shiny Macs coming out and new models in the works, surely Apple's engineers will make an effort and modernize their lonely little mouse.

Even though most would love to see Apple invent a serious Logitech-like mouse competitor, Jony Ives will have nothing to do with that. So we'll wait and see what crumbs he'll send our way – someday. The patents look promising enough; though after eight years or so of waiting, it's hard to take them seriously when it comes to next-gen mice.

The good news however is that the odds for an update bringing haptics and force touch to the Magic Mouse are extremely high in the not-too-distant future. So the long wait may be over soon enough.

Apple's latest patent application 20170249024 is titled the "Haptic Mouse." It was filed in February 2016 and published today. The invention relates to "graspable input devices such as computer mice that are operable to provide various types of haptic output. Apple's engineers have come up with five variations of a next generation Magic Mouse showing us that they're still a little undecided as to which way they'll go.

Apple's patent FIG. 1 noted below depicts a system for providing output via a haptic mouse and FIG. 8C depicts a cross-sectional view of Apple's fifth example of a haptic mouse.

The Fifth Example of the Haptic Mouse 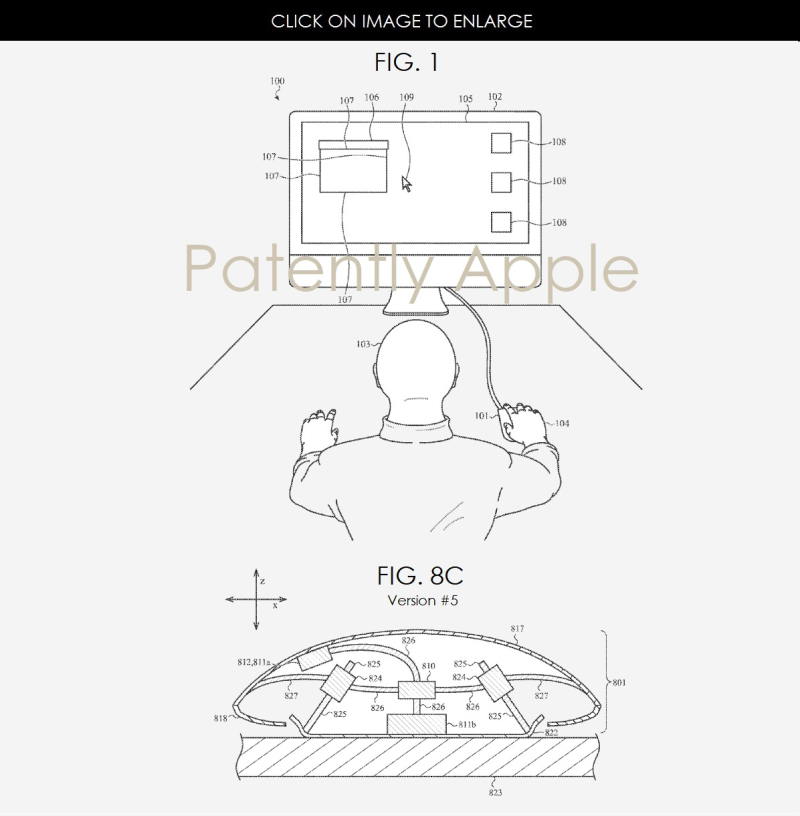 Apple's fifth example of a haptic mouse is the one that they have chosen to best represent their invention. So the focus below will be on this single example.

Apple's patent FIG. 8C noted above depicts a cross-sectional view of an example implementation of the fifth example of a haptic mouse #801. In this implementation, the variable surface area of the rubber foot of the friction adjustment mechanism #822 may be controlled by motors #824 (connected to a controller #810 that is operable to provide a haptic output by signaling the friction adjustment mechanism #822 in order to control the motors via flex circuits #826 and/or other electrical connections) that are operable to extend and retract pistons #825. In this way, portions of the rubber foot may be operable to extend from a housing and/or retract into the housing.

The motors may be coupled to the bottom portion #818 and/or portions of the haptic mouse via supports #827. Extension of the pistons may force ends of the rubber foot out of the housing such that the rubber foot has a larger surface area in the X and/or Y directions (and thus more friction between the housing and the surface #823).

To review the other four haptic mice concepts, click here. Considering that this is a patent application, the timing of such a product to market is unknown at this time.