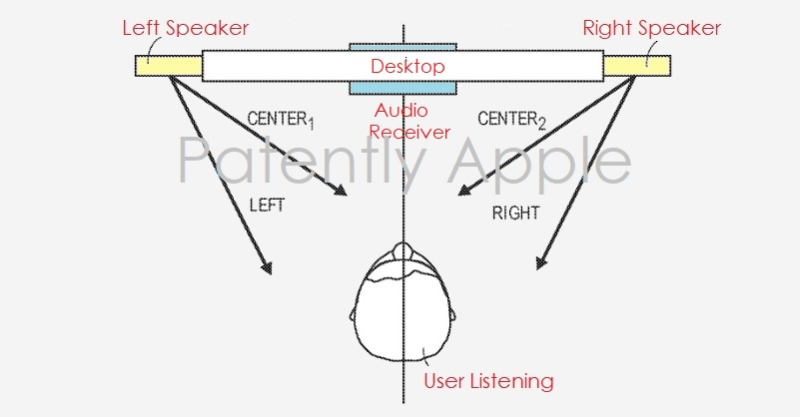 Apple's audio team has been busy lately with several patents surfacing. Patently Apple posted a report over the weekend about an advanced multi-speaker audio system designed for TV and live-streaming and another published in April that could be used in an amphitheater, perhaps like the one the Milan Apple Store will have working in the future. In a newly granted patent that surfaced yesterday at the U.S. Patent Office, Apple's latest audio patent covers a system that could one day work with a desktop, a MacBook, a home entertainment system and even an amphitheater. More specifically, Apple's patent covers a system for reproducing a stabilized phantom center audio channel using left and right speaker arrays by separately controlling the directivity of audio signals representing the left and right channels. By doing so the sound would remain centered for the user even if they're not perfectly centered with the display.

Apple notes in their patent background, that in cinema and many home theater systems, sound for front left and front right audio channels is produced by corresponding speakers located respectively to the left and the right sides of a screen or display. Although they may be located outside the screen's boundaries, these front left and right speakers may produce left and right channels with reasonable angular accuracy.

Apple's newly granted patent 9,729,992 covers their solution to this problem. Apple notes in their patent filing that in one embodiment, an audio receiver receives a left audio channel, a right audio channel, and a center audio channel for a piece of sound program content. A content processor generates separate sets of audio signals for each of these audio channels for driving corresponding transducers in left and right loudspeaker arrays.

In one embodiment, the left, right, and center audio channels may be equalized or otherwise adjusted to abate auditory distortions. For example, in one embodiment a peak equalizer may be used for equalizing the center audio channel to eliminate a response dip caused by (1) the summation of the first and second center directivity patterns at the ears of the listener, (2) a delay caused by the separation of the left and right ears of the listener, and (3) sound diffraction and reflections about the head of the listener. 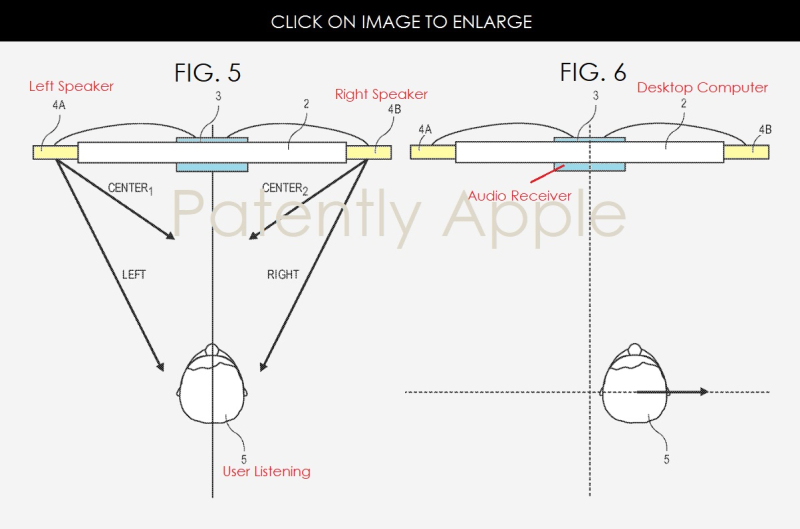 Apple notes in FIG. 6 that "as the listener moves to the right towards the loudspeaker array 4B, the sound level from the left center pattern increases while the sound level from the right center pattern decreases." This will balance the sound even if the user isn't positioned exactly to the desktop's center position. Of course this could apply to future MacBooks, a television and beyond.

Whether this will apply to Apple's next-gen modular desktop, MacBook or even smart TV is not known at this time. The timing of any patented invention to market is never guaranteed.