Andy Rubin's Essential Phone to debut this fall at Best Buy and Amazon on Sprint in the U.S. and Telus in Canada

On May 30, Patently Apple posted a report titled "Andy Rubin's 'Phone' was Unveiled today and he'll be talking about it Tonight with Mossberg at the Code Conference." Yesterday Reuters reported that Essential Products, the smartphone startup founded by a co-creator of the Android mobile operating system, has raised $300 million in new funding and signed up retailers to sell its first device.

The $699 phone, with a titanium and ceramic case, will compete directly against new devices from Samsung Electronics and Apple Inc this holiday season. Retailers include Best Buy, Amazon.com and carriers Sprint Corp in the United States and Telus Corp in Canada, Essential said in a statement.

The company, founded by Chief Executive Andy Rubin in late 2015, said Access Technology Ventures led the funding round, which brought its total investment raised to $330 million. 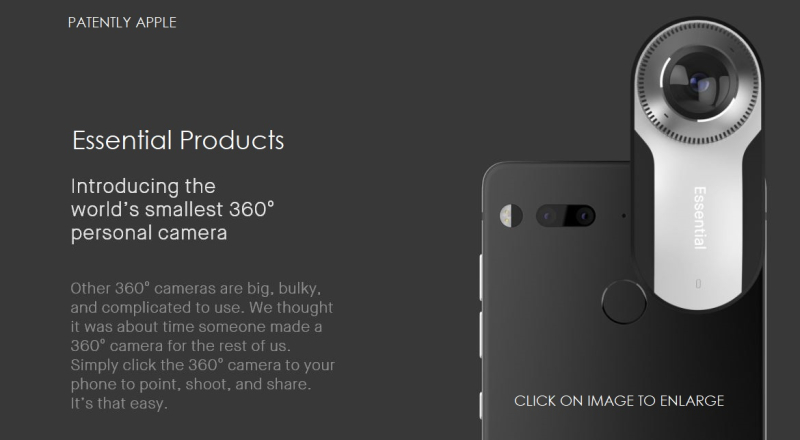 Bob O'Donnell of Technalysis Research said by phone that "It's going to be extraordinarily challenging. The initial specs of the phone look good, but not necessarily unique."

Essential will focus on "building a brand in the Western World" before expanding to other countries, De Masi said. It would consider sales of "low single-digit millions" of phones in its first year a success, he added, noting that production was limited by the unusual materials of titanium and ceramic. Most phones have aluminum or plastic casings.

Essential President Niccolo De Masi said in an interview with Reuters that "Over the next five to 10 years, we will have the same retail footprint and product diversity as Samsung and Apple."

With Apple's iPhone 8 launching in September and Samsung's Note 8 launching on August 23, the 'Essential' smartphone doesn't stand a chance of making a dent in the market unless they deliver a surprise feature they've yet to reveal. The Essential phone is going to be one in a sea of Android smartphones and little else.