Last week Patently Apple posted a report that covered a new low key project for Apple's Titan team involving a self-driving shuttle service transferring employees from one Apple building to another. The shuttle, which has never been reported on before, will likely be a commercial vehicle from an automaker and Apple will use it to test the autonomous driving technology that it`s developing. Many in the Apple community saw that tiny project as the end to the dream of an Apple branded vehicle. While Project Titan remains a mystery as to its end game, a new Bloomberg report is claiming that 17 Project Titan team members that came from Detroit specializing in breaking and suspension systems have left for an autonomous vehicle startup called Zoox. 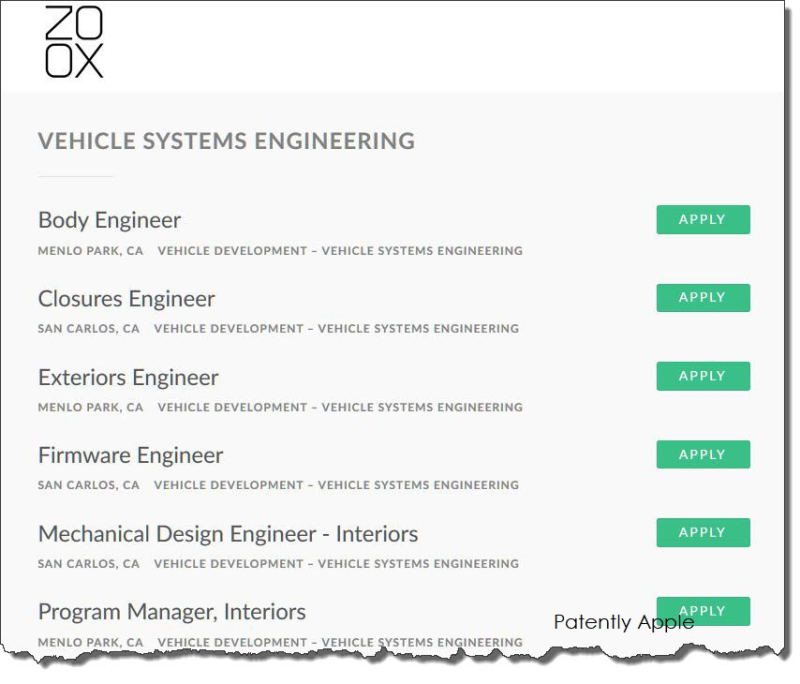 One web page from Zoox is dedicated to finding new engineering team members in positions such as steering, seating, suspension, telematics, body and interior engineers, energy, safety, software engineers and the list looks like the credits of movie that never ends.

The Bloomberg report claims that "Apple pared back its automotive ambitions last year after rising costs and headcount at Project Titan, as the program is dubbed. Hundreds of engineers were either fired, reassigned or left of their own volition and the project was given a deadline of late 2017 to prove the feasibility of its autonomous driving system and decide on a final direction, people familiar with its workings told Bloomberg News last year.

Chief Executive Officer Tim Cook said in June that Apple is focusing on autonomous driving systems. That technology could then be licensed to carmakers, or Apple's efforts to make its own car may be resurrected at a later date."

The report further noted that "The latest exodus to Zoox suggests Apple is less likely to revive ambitions to make a car itself. The engineers found themselves increasingly sidelined and surplus to requirements at Apple, and were hired by the startup in piecemeal fashion in recent months, the people said."

In context to Apple originally hiring hundreds if not thousands of engineers to kick-start Project Titan, 17 engineers leaving and talking to Bloomberg about it doesn't really confirm much. At best the report may prove that Apple is continuing to scale down its original team to meet the projects that they're prioritizing while acting as a great recruitment advertisement for Zoox.