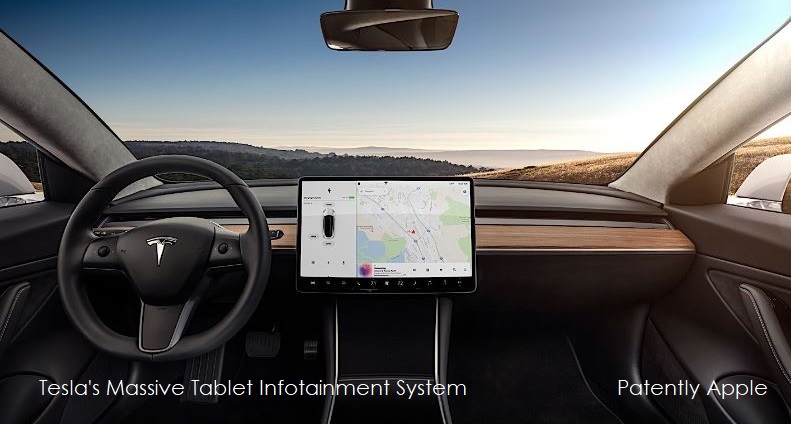 On Friday Tesla delivered their latest electric car called the Model 3 at a special event and allowed some to take a spin in them as Engadget did and reported on. The USA Today video noted in our report is short and to the point showing various models and the new interior with its large infotainment system tablet attached to the dash. While it's impressive, its nowhere near where the industry is going with dashboard instrumentation. In fact it's nothing shy of reinventing the dashboard as we know it today.

On Wednesday Foxconn's Terry Gou announced plans for a massive new plant coming to Wisconsin. While we knew it was going to be an LCD display plant, Gou made it clear that it would produce 8K TV's and displays for the auto and medical industries as well. Gou understands all too well that TV's made in the U.S.A. via Sharp will be a pro "Made in America" brand that will likely be able to dethrone Samsung if Americans cheer on companies bringing jobs to the U.S.

When I heard Gou mention the auto industry I simply thought of smart windshields. But a recent Samsung patent has made be rethink that position in-part.

One of Samsung's patents released this past week shows the reinvention of the dashboard that will span the entire width of the vehicle and display a multitude of interfaces.

There's one patent figure presented below that struck me as a phenomenal idea. When backing up, the entire dash converts to being a massive rear view display showing the entire width of your vehicle backing up. Maybe it's just me, but that sounds like a great idea. Though in general, we can easily see this kind of dashboard coming to market sometime in the not-too-distant future.

Considering that Apple has made it known that they're indeed working on a vehicle, or "the Mother of all AI Projects" focused on autonomous vehicles, it's very likely that the next-gen dashboards could be something that Apple and Foxconn can be working on for the long haul. So even though the patent is from Samsung, we're able to get a glimpse into the thinking of behind full width smart dashboards. 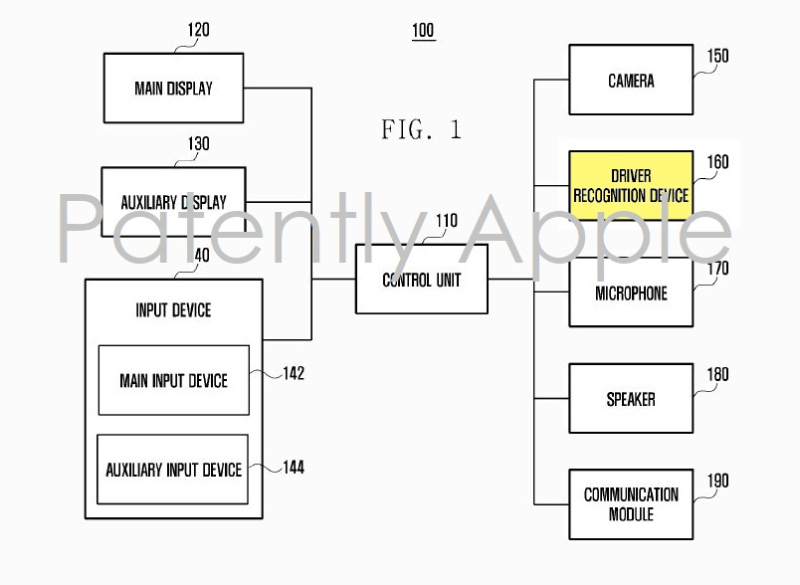 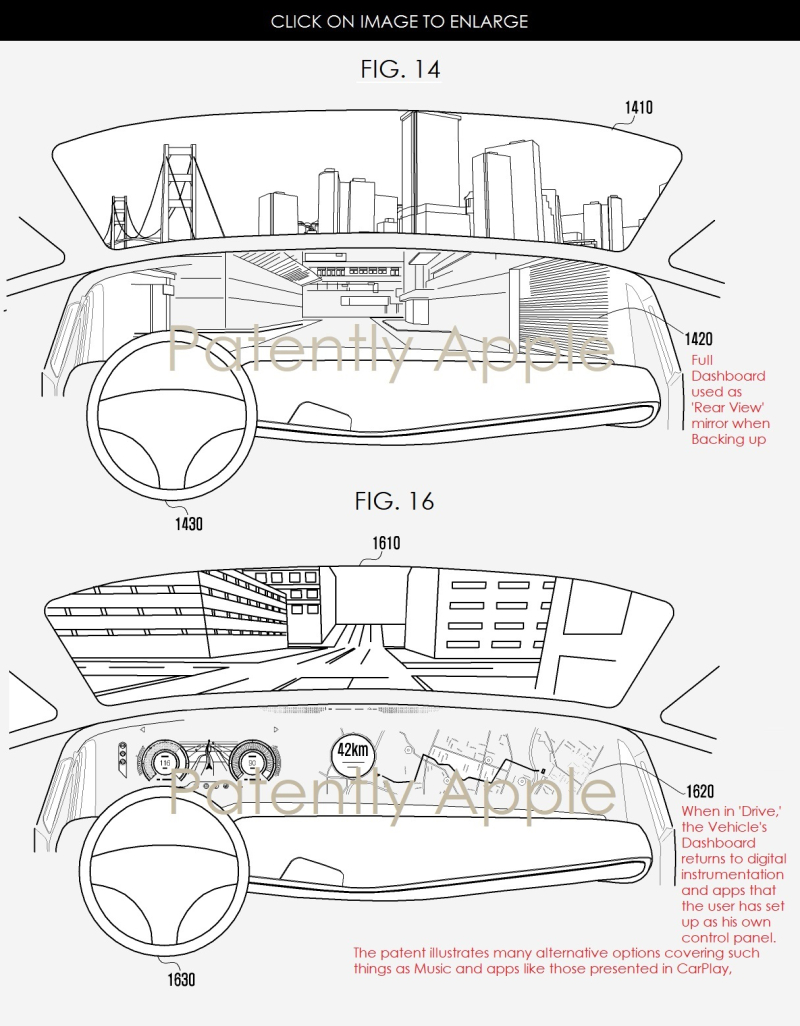 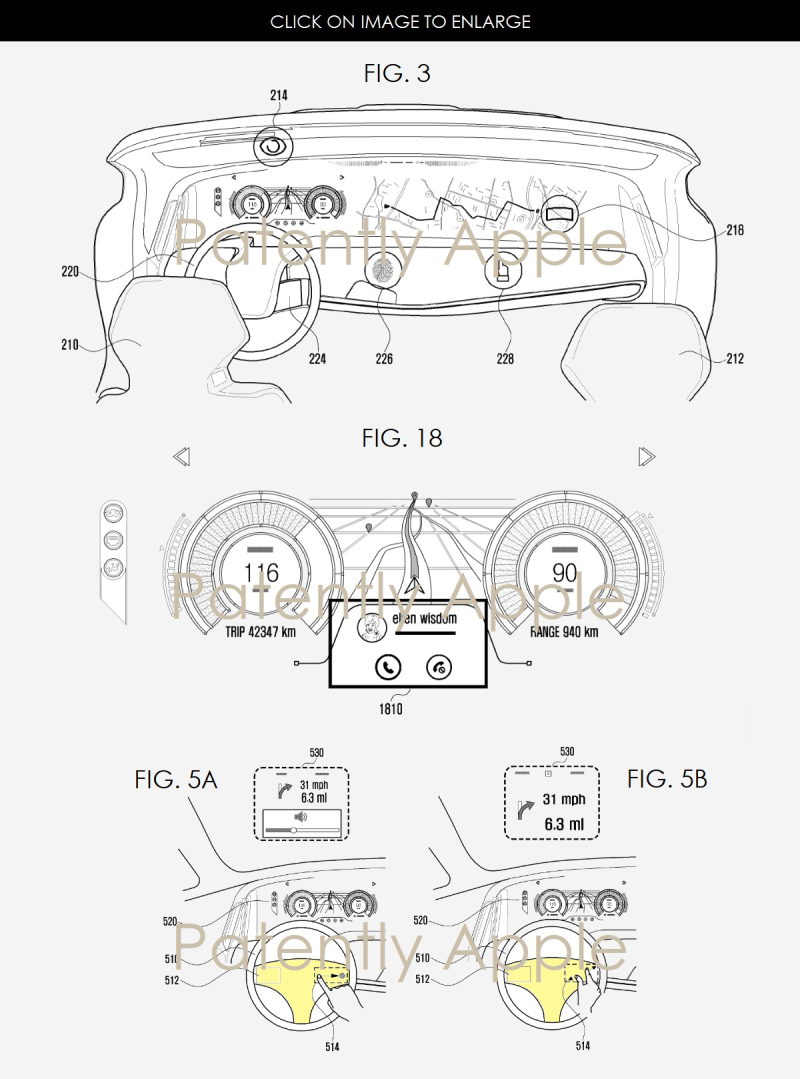 Patent FIG. 3 illustrates the interior of an automobile to which an automotive control system according to embodiments of the present disclosure is applied; FIGs 5A and 5B shows the user interacting with an additional display built into the steering wheel. When the driver chooses to play their music app, the display could show the driver option to control volume or change track. Users can adjust the control panel elements of any app by using pinch in and pinch out controls or move them left or right etc.

Of course there's more to the patent, but I just wanted to emphasize the next generation LCD displays used in next-gen vehicles. And it could be one of the directions that Foxconn may take with the auto industry as well as heads-up displays for augmented reality projected to the windshield. And if Apple is going to be involved in designing a vehicle or key parts of one, then CarPlay is likely to take on a whole new dimension.