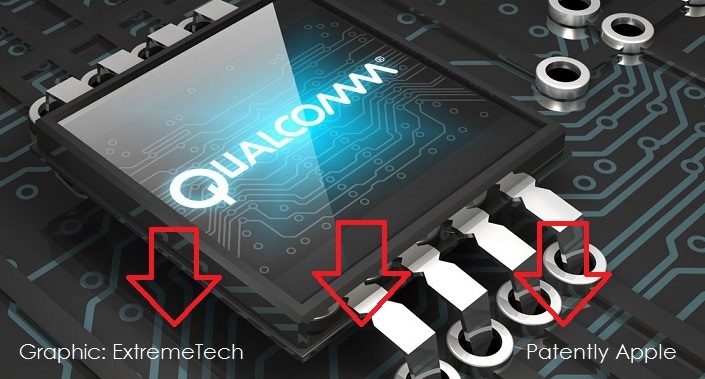 It was just yesterday that we reported that Qualcomm's CEO attempted to downplay their war with Apple and today we've learned that they've filed yet another lawsuit against Apple in Germany while Apple joined a lawsuit filed by four of their suppliers. Today, after the bell, Qualcomm Inc reported a 40 percent slump in quarterly profit as its escalating patent battle with Apple took a toll on its business. Shares of the company were down 2.3 percent at $55.40 after the bell on Wednesday.

The chipmaker said its results took a hit as Apple's contract manufacturers did not pay royalties due on sales of Apple products.

There has been long-running tension between the company and the iPhone maker over Qualcomm's practice of taking a cut of the total price of the phone in exchange for modem chips, which connect phones to wireless networks.

Apple first sued the chipmaker in January, accusing it of overcharging for chips and refusing to pay some $1 billion in promised rebates.

The company said third-quarter results included a reduction in operating cash flow due to a $940 million payment to BlackBerry Ltd and a $927 million payment related to the Korea Free Trade Commission (KFTC) fine, in addition to the payments withheld by Apple to its contract manufacturers.

In Qualcomm's full press release (PDF) they noted that "We have not included estimates related to the operating results of any proposed acquisitions in our fourth quarter of fiscal 2017 outlook. Our financial guidance for the fourth quarter of fiscal 2017 excludes QTL [Qualcomm Technology Licensing] revenues related to the sale of Apple products by Apple’s contract manufacturers as well as the other licensee in dispute as we expect the recent actions taken by these licensees will continue until the respective disputes are resolved.  As a result, we currently do not believe total reported device sales is meaningful in measuring our QTL business.  Alternatively, we are providing guidance for QTL revenues for the fourth quarter of fiscal 2017."