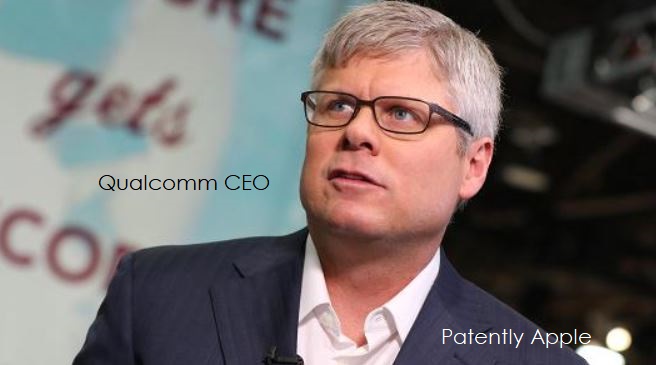 In May Patently Apple posted a report titled "Qualcomm Plans Retaliation against Apple and ask the International Trade Commission to Stop iPhone Sales." It was reported then that Qualcomm was preparing to ask the International Trade Commission to stop the iPhone, which is built in Asia, from entering the country, threatening to block Apple's iconic product from the American market in advance of its anticipated new model this fall. Today Qualcomm did just that.

Today Qualcomm announced that it is filing a complaint with the United States International Trade Commission (ITC) alleging that Apple has engaged in the unlawful importation and sale of iPhones that infringe one or more claims of six Qualcomm patents covering key technologies that enable important features and functions in iPhones. Qualcomm is requesting that the ITC institute an investigation into Apple's infringing imports and ultimately issue a Limited Exclusion Order (LEO) to bar importation of those iPhones and other products into the United States to stop Apple's unlawful and unfair use of Qualcomm's technology.

The Company is seeking the LEO against iPhones that use cellular baseband processors other than those supplied by Qualcomm's affiliates. Additionally, Qualcomm is seeking a Cease and Desist Order barring further sales of infringing Apple products that have already been imported and to halt the marketing, advertising, demonstration, warehousing of inventory for distribution and use of those imported products in the United States.

"Qualcomm's inventions are at the heart of every iPhone and extend well beyond modem technologies or cellular standards," said Don Rosenberg, executive vice president and general counsel of Qualcomm. "The patents we are asserting represent six important technologies, out of a portfolio of thousands, and each is vital to iPhone functions.  Apple continues to use Qualcomm's technology while refusing to pay for it. These lawsuits seek to stop Apple's infringement of six of our patented technologies."

Qualcomm today also filed a complaint against Apple in the U.S. District Court for the Southern District of California alleging that Apple infringes the same six patents in the complaint filed in the ITC. The complaint seeks damages and injunctive relief.

Qualcomm expects that the ITC investigation will commence in August and that the case will be tried next year.

Qualcomm is certainly freaking out of late. It was reported by the Korea Times on in the last week that The Qualcomm chairman reportedly expressed dissatisfaction over a fine levied by Korea's antitrust watchdog in a meeting with President Moon Jae. In December Patently Apple covered this in a report titled "Korea's Antitrust Agency Hits Qualcomm with Record $865 Million Fine for Excessive Licensing Fees to Phone Makers."

Qualcomm's chairman made the complaint at the Korea-U.S. Business Summit, which was jointly hosted by the Korean Chamber of Commerce and Industry and the U.S. Chamber of Commerce in Washington D.C. last Wednesday during President Moon's visit to the country, according to reports.

President Moon as well as the heads of the two chambers of commerce and some Korean and American major business leaders, including Qualcomm Chairman Paul Jacobs, were at the closed meeting before the official dinner.

Jacobs also said that Qualcomm will play important role in future of info-tech development along with Korean companies. But he also said that Korean Fair Trade Commission's (FTC) penalty on Qualcomm was "unfair," that it doesn't suit the Korea-U.S. Free Trade Agreement (KORUS FTA). Jacobs further noted that "These rights and others are supposed to be guaranteed to U.S. companies under the KORUS FTA, yet the Korean FTC declined to implement these fundamental procedural safeguards."

Despite Qualcomm's appeal, the firm is facing similar investigation by antitrust regulators in the EU and Taiwan, and global companies like Apple, Intel and Samsung Electronics are confronting Qualcomm.

I'm sure the new South Korean President wasn't impressed being cornered and pressed on this matter at the Washington event. It sure makes Qualcomm look very, very desperate.