Home Archives Contact Us Subscribe Twitter MeWe Patently Mobile
Tesla's Infotainment Tablet may be Large but nothing compared to what the Industry Envisions for the Future
The First Official Law in the U.S. against Distracted Texters in a Crosswalk will take Effect this October in Honolulu 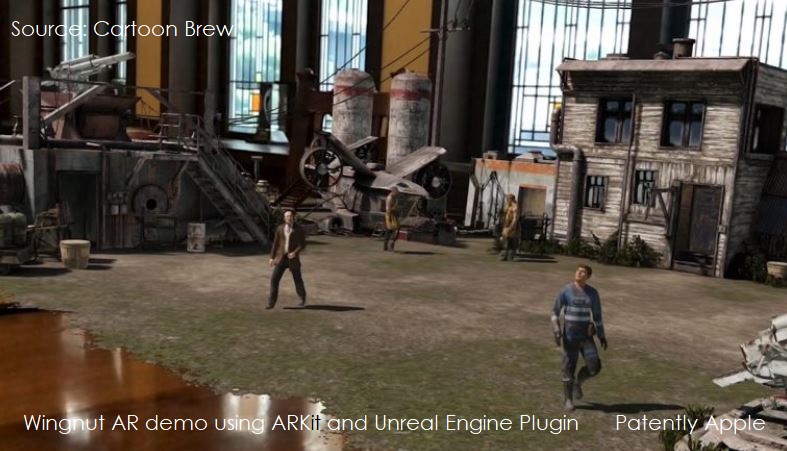 Apple gave Wingnut AR special access to its ARKit - an augmented reality developer kit to create an advanced AR game for Apple's World Wide Developer Conference held in June. In the brief video presented below, posted by the BBC yesterday, Sir Peter Jackson's studio discusses the augmented reality demo with new insight from the creative director Alasdair Coull. Another company of Jackson's that's called Wingnut Films played a role in the creation of Lord of the Rings and the Hobbit.

In another report on this published earlier this month they noted that "On stage, Wingnut AR's creative director Alasdair Coull demonstrated a tabletop ar experience made using Apple's upcoming augmented reality developer kit called ARKit and Epic Games' Unreal Engine 4. The experience blended a real world environment – the tabletop – with digital objects, in this case a sci-fi location complete with attacking spaceships, while being viewed live, on an iPad.

Coull added that "our developers Dan Smith and Andy Styles built a plugin to hook up ARKit and UE4 that let us use the power of ARKit quite easily within UE4,' explained Coull. 'During the project, Epic Games got very involved and they've now taken ownership of the plugin, tidied it up, and have released it to the world, so anyone can use UE4 [with ARKit].'

The WWDC demo ran on a new iPad Pro at 60 frames per second, which impressed Coull. 'As with any real-time project, we had to be careful about how we created assets, and in particular how the fx were constructed to keep that frame rate up. We built some custom tools to help us optimize effects after they are simulated and that helped a lot at keeping the performance up in key points, like when the building explodes at the end.'" You can read more about this in Cartoon Brew article here.