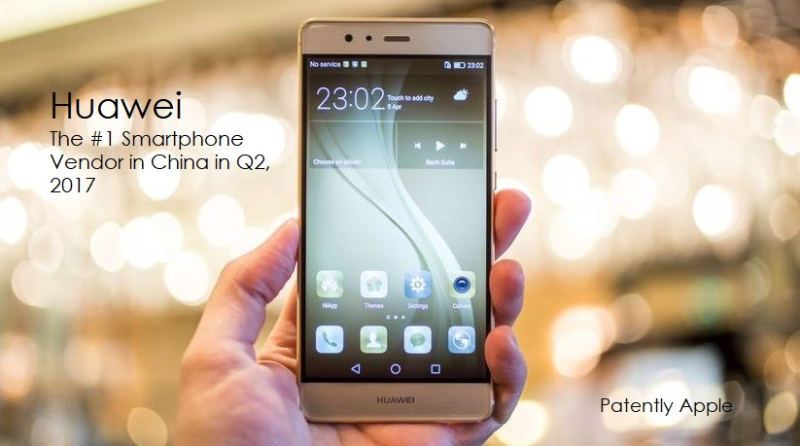 Yesterday Patently Apple posted a report titled "While Apple is Still Holding on to Fifth Spot in China, Samsung has fallen from Grace with a Paltry 3% Market Share." Supporting our report is the latest report from Canalys' Smartphone Analysis service which shows that after six consecutive quarters of growth, Chinese smartphone shipments fell 3% to 113 million in Q2 2017. Huawei shipped over 23 million to lead the market for the second quarter in a row. Oppo shipped just over 21 million and had to settle for second place, despite growing 37% year on year. Vivo held onto third place, shipping just over 16 million, losing ground on the leading pair during the quarter.

Xiaomi was the standout vendor as it overtook Apple to take fourth place. It shipped just under 15 million smartphones in China, up more than 60% sequentially.

Canalys Research Analyst Lucio Chen stated that "Xiaomi still offers the best value in the Chinese market, and it remains the preferred choice for price-conscious consumers. The online channel continues to be a key route to market for Xiaomi and this quarter saw it take the lead in the 618 online sales events across online retail platforms, such as JD.com and Tmall. Redmi has had strong uptake in the mid-tier, going head to head with Oppo's A series and Vivo's Y series. Xiaomi's growing network of 'experience stores' will pose a threat to Oppo's and Vivo's offline dominance, while showcasing the design and build quality of its devices."

The rest of the top ten, including Apple, Samsung and Meizu, all suffered annual shipment declines this quarter.

Canalys Research Analyst Hattie He added that "China's smartphone market continues to consolidate. The top five brands accounted for almost three quarters of shipments, with the top four all growing and adding 10% to their cumulative share compared with the same quarter a year ago. Adopting a diverse channel strategy is key to success in China, as competition has intensified in online and offline channels, resulting in many vendors losing market share quickly. Huawei and Xiaomi have strong online brands, and are now rapidly growing their offline channels. Oppo and Vivo face greater pressure on their mid-range from Redmi and Honor. The failure to establish online channels will slow the momentum of these rising stars."

Despite having a disastrous quarter for smartphones in China, Samsung announced earlier today that it delivered a record second quarter on the back of robust chips, displays and smartphone sales. During today's conference call in the morning, the firm also unveiled business plans for its core electronic components and smartphone businesses.

Lee Sang-hyun, marketing chief of the tech giant's foundry business said "Samsung has started the production of 10-nanometer chips and plans to produce 8-nano chips in the later half of this year.

By the end of 2018, Samsung will start the pilot production of 7nm chips based on EUV lithography tech which is used to etch the circuit design on a silicon wafer. Utilizing Samsung's smart scaling solution, it plans to start producing the first batch of 6nm chips in 2019 while a 4-nm chips equipped with gate-all-around transistors will be mass-produced in 2020."