A new report posted yesterday by DigiTimes quoted the chairman for Taiwan-based LED epitaxial wafer and chip maker Epistar stating that Micro LED technology could be commercially applied in smart wearables, VR or AR in 1-2 years at the earliest, with larger displays coming 3-5 years after. As shown by a survey by the Taiwan Electronic Equipment Industry Association, 57% of surveyed experts think that Micro LED technology will be initially used in smartwatches in three years.

In May Patently Apple posted a report titled "Interest in Micro-LED Displays is Exploding as Test Runs are Reportedly Scheduled by Apple in 2017 and others in 2018," followed by a report in June titled "Industry Insiders Claim Apple working on their Augmented Reality Headset that will Indeed use a Micro-LED Display."

Yesterday's DigiTimes report added that Apple is likely to introduce micro-LED displays in small to medium sized displays which points to the Apple Watch and perhaps smartglasses of one kind or another.

Today the US Patent & Trademark Office published a patent application from Apple that relates to micro-LED displays covering all sizes from small through to smartphones, computer displays, high definition televisions and beyond using smart pixel technology.

The use of the TFT backplane allows improved precision in relation to passive matrix displays, however the use of the thin-film transistor backplane is not without drawbacks. High quality TFT fabrication is costly. The highest quality TFTs require fabrication on a quartz substrate due to the high temperatures involved in the fabrication process. Lower temperature processes can be used with a glass substrate, however the resulting transistors may suffer from low carrier mobility, reducing the conductivity of the transistors. Current leakage and power consumption can also become a problem, and uniformity issues can arise at various points during the fabrication process.

In one embodiment, the smart-pixel microcontroller is configured for digital input, and has an input block and output block containing digital logic, and a storage module with embedded memory. Digital input can come by way of a digital bus or point-to-point data link. Multiple LED devices or sensor devices can be controlled with a single microcontroller. In one embodiment, adaptive display updates are facilitated by data storage in each integrated circuit.

In one embodiment, the smart-pixel micro-matrix is constructed on a receiving substrate suitable for use in lighting devices. The smart-pixel microcontrollers can be used to maintain precise brightness, uniformity, and color control over the emitted light. In one embodiment, the smart-pixel micro-matrix is used as an LED backlight, for liquid crystal display (LCD) devices. Blue or UV LEDs in combination with a yellow, blue-yellow or white phosphor can be used to provide a white backlight for LCD displays. White light can also be generated by various combinations of single color LED devices with or without the use of phosphors. In addition to white lighting, additional single color LED devices (e.g., red, amber, green, blue, etc.) devices can also be used to provide a wider color gamut and color rendering index than otherwise possible with white backlights.

It was interesting to learn from Apple's patent filing that micro LED devices are highly efficient at light emission and may consume very little power (e.g., 250 milliwatts for a 10 inch display) compared to 5-10 watts for LCD or OLED emission. Such a display for an iPad would extend battery life considerably. 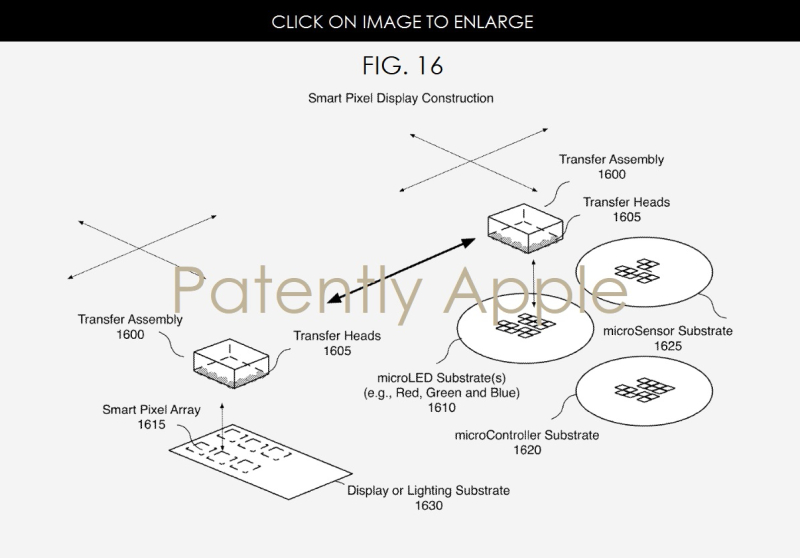 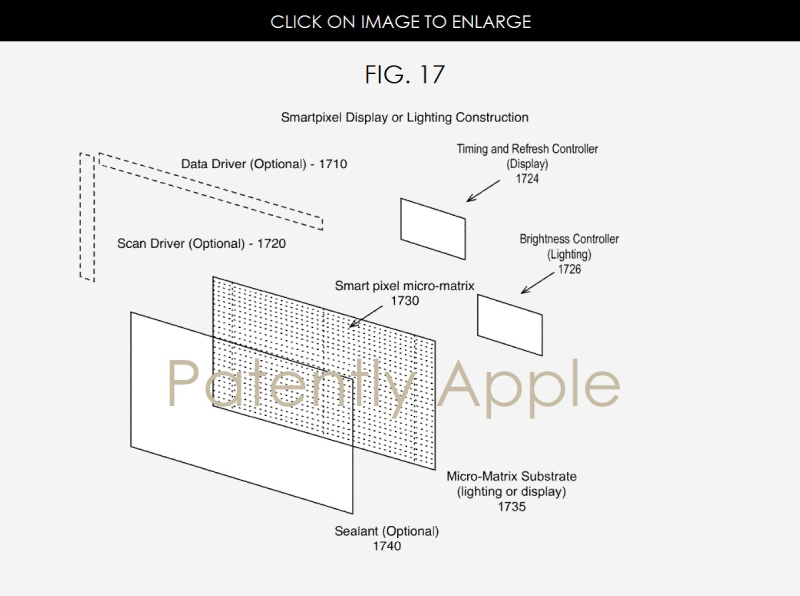 It's interesting to note that in Apple's patent FIG. 9 that note that "The smart-pixel micro-matrix #920 can correspond to a single display, or a portion of a display, such as a high definition television, or large outdoor display." TV's were also mentioned in the DigiTimes report pointing to Sony working on that size of micro-LED device. 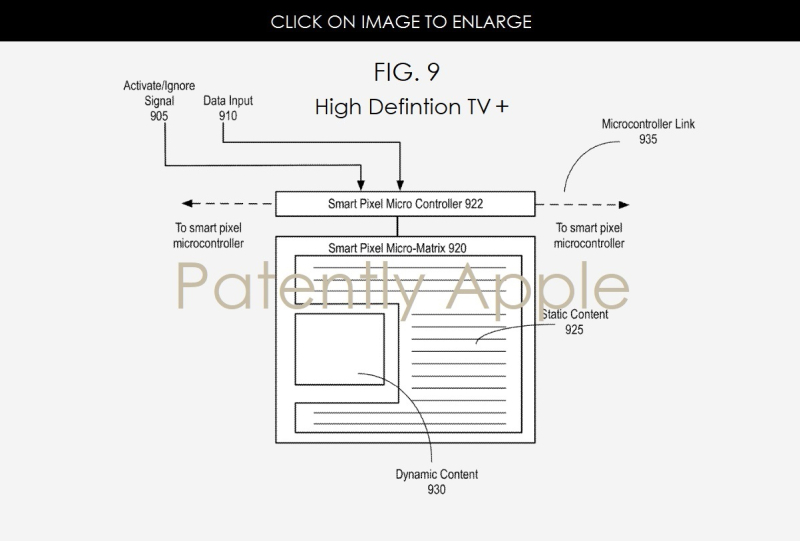 Apple's patent application 20170206845 was filed back in Q2 2017. The original patent was granted to LuxVue in 2015. Considering that this is a patent application, the timing of such a product to market is unknown at this time.