In December 2015 Patently Apple posted a report titled "Apple Invents Siri for Home Automation." Today Patently Apple has discovered an Apple patent in Europe that was filed in Australia June 22, 2017 titled "Intelligent automated assistant in a home environment." While the two patents cover the same title, they in fact cover different graphics and more. The Australian patent filing is noted to incorporate five Apple patents relating to home automation in context with an intelligent automated assistant that were filed between 2014 and 2016.

Apple describes how complex creating a home automation system is without a Siri-like assistant. Apple notes, "for example, a typical home can include 40-50 light bulbs placed throughout the various rooms of the home. Using conventional software applications, each light bulb is given a unique identifier, and a user attempting to control one of these devices must select the appropriate identifier from a list of available devices within a graphical user interface.

Remembering the correct identifier for a particular light bulb and finding that identifier from a list of 40-50 identifiers can be a difficult and time-consuming process. For example, the user can confuse the identifier of one device with that of another and thus be unable to control the desired device. To add to the difficulty of managing and controlling a large number of remotely controlled devices, different manufactures typically provide different software applications that must be used to control their respective devices. As a result, a user must locate and open one software application to turn on/off their light bulbs, and must then locate and open another software application to set the temperature of their thermostat.

The filing is long and detailed and at times interesting to see the complexities behind creating a home automation system from Siri having to understanding a number of commands in relation to the home. For instance, telling Siri to open a door when you're in front of it or sitting in the living room, Siri has to figure out what door the user is referring to. That might be dealt with by using GPS or other means.

In another example, Apple notes that "A digital assistant can also process user commands for performing a future action in response to a specified condition. The action or the condition is with respect to one or more devices in an established location. For example, the user provides the natural language command "Close the blinds when it reaches 80 degrees." 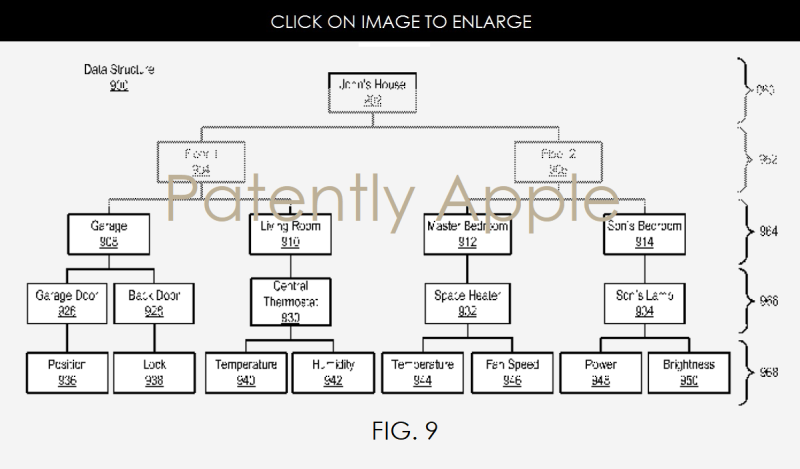 In Apple's patent FIG. 9 above we're able to see is a hierarchical chart illustrating exemplary data structure #900 that represents a set of devices of an established location. As shown, the data structure includes a plurality of nodes 902-950 organized in a hierarchical structure across levels #960-968. The organization of nodes #902-950 defines how the various devices (e.g., garage door, back door, central thermostat, space heater, and son's lamp) of the established location relate to the various regions (e.g., floor 1, floor 2, garage, living room, mater bedroom, and son's bedroom) of the established location. 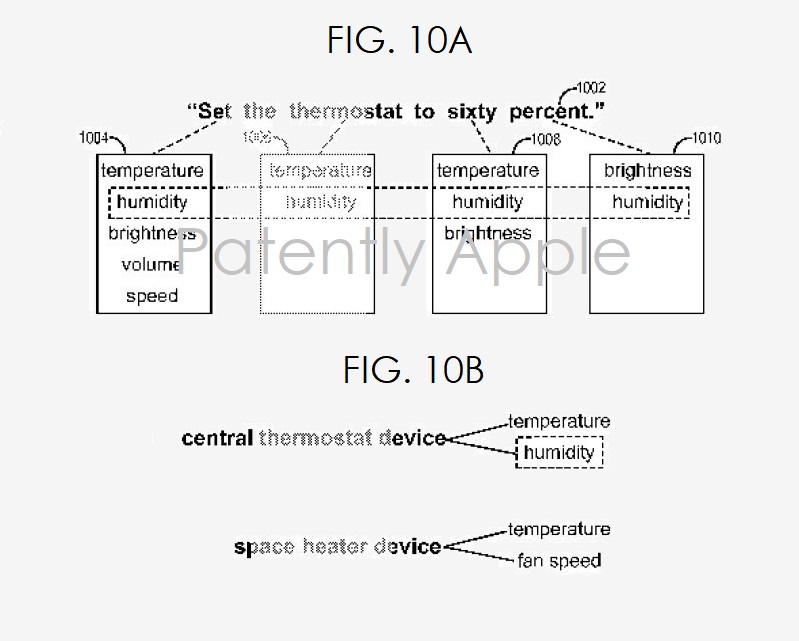 In another example dealing with lighting in the home, Apple notes that "In some examples, the criterion is associated with the device characteristic of "brightness" for a brightness sensor (e.g., light sensor, photodiode) of the established location.

In particular, the discourse input is "Turn on the living room lights once it gets dark," "Close the blinds if there's direct sunlight," or "Bring down the shades half way when it gets too bright." In these examples, corresponding quantitative values for the ambiguous criteria "dark," "direct sunlight," or "too bright" are determined. For example, "dark" is determined to correspond to the criterion of detecting a brightness of less than a predetermined value (e.g., 0.2 lux) at a brightness sensor of the established location. Similarly, "direct sunlight" or "too bright" corresponds to the criterion of detecting a brightness of greater than a second predetermined value (e.g., 25000 lux).

Apple's patent covers many examples covering air quality, authentication, how to control the times your children can watch TV, when to turn lights on or off, how to control your Christmas lights, sprinklers and much more.

The majority of the patents rolled into this current filing were filed in 2016, two years after Apple introduced HomeKit at WWDC 2014. 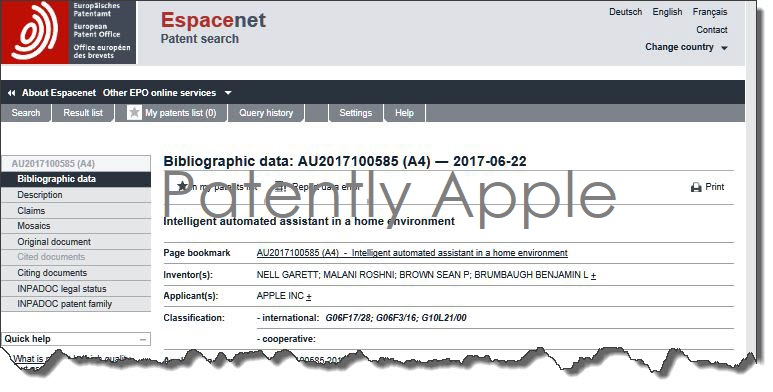