Back in September 2016 Apple representatives proposed opening a flagship store and events center in one of the District's most prominent and historic buildings, the Carnegie Library in Mount Vernon Square." In May of this year Apple made their official pitch for their new Apple Store. There was an outcry from some cultural elitists in Washington about Apple's proposal. Citylab.com wrote an extensive piece on the matter shortly after Apple made their pitch and noted that "Giving the Carnegie Library to Apple, under the flimsy premise that Apple is somehow a cultural organization, ignores the enormous appetite for authentic art experiences in the District." The article later added that "As far as titans of industry go, Tim Cook is a far cry from his predecessors. At least Andrew Carnegie gave the city something. Apple seeks to take it away." Well, someone had to be the winner and it's turned out to be Apple.

Today, Events DC, the official convention and sports authority for the District of Columbia, announced that its Board of Directors and Apple have finalized terms and will execute the lease with Apple.

Under the lease terms, the location will be at Carnegie Library at Mt. Vernon Square, the center of a newly transformed convention and entertainment district in downtown DC. Furthermore, a Tri-Party Agreement among Events DC, Apple and the Historical Society of Washington, D.C. will also be executed, memorializing a co-location of Apple and the Historical Society as part of the reimagined vision at Carnegie Library.

Mayor Muriel Bowser stated that "The partnership between Events DC and Apple demonstrates an innovative approach to preserving the historic character of our world-renowned Carnegie Library while creating a cultural experience that welcomes residents from across the District of Columbia and visitors around the world. We look forward to the Carnegie Library re-opening its doors as a destination in DC's Other Mall - our thriving retail center in the central business district."

Within the signed agreement, Apple will lease a portion of the Carnegie Library, comprising approximately 19,000 square feet of interior space. Apple will also have the same rights to program its portion of the building and grounds as agreed upon in the letter of intent. The lease term is ten years with two five-year options. The Historical Society, under its existing 99-year lease, will continue to operate its museum and library in the building, with approximately 13,000 square feet of space on the basement level, second and third floors. 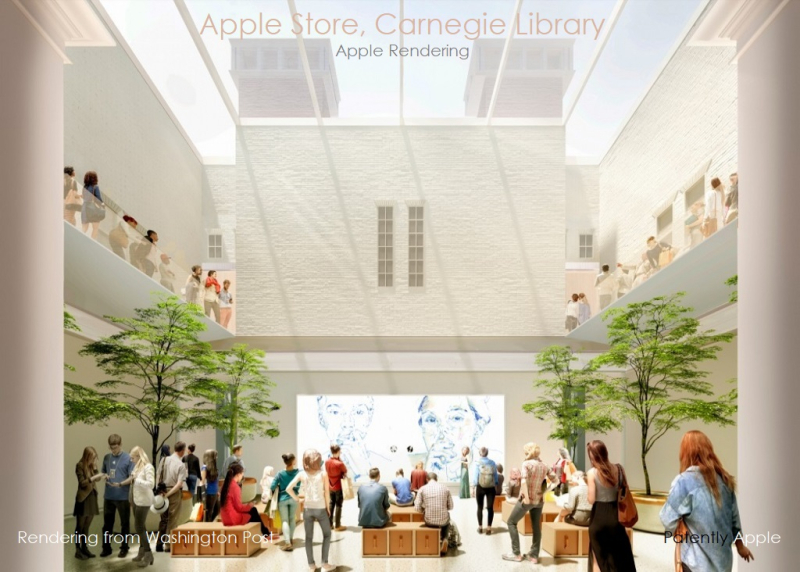 Max Brown, chairman of Events DC Board of Directors stated in the press release that "This collaboration is about more than simply bringing another retail space into downtown. It showcases how a neighborhood can undergo rapid transformation while adopting the essential characteristics required to move forward into a new century. As part of its philanthropic efforts, Apple will also empower local youth with job-training and educational programming. Through this collaboration, Apple's investment in the neighborhood will stimulate additional activity and spending in the area to ensure that the community will continue to thrive."

The partnership will breathe new life into the Carnegie Library, restoring its historic beauty while continuing and reinventing the building's original purpose of sharing knowledge and information.

Apple will also attract a broad audience to the area, increase traffic to surrounding local businesses, and help revitalize the neighborhood as it creates a common place for our community to gather and have access to events.

Gregory A. O'Dell, Events DC president and chief executive officer added to the press release that "Apple's commitment to Carnegie Library further reinforces the Mt. Vernon Square area as a burgeoning convention and entertainment district in the heart of our city. We thought creatively about how to reposition this vitally important asset and pushed to make it happen."

This deal signals the attractiveness of Washington, DC, to global companies and the strength of our market to continue to create job opportunities for all.

"This project will most importantly save the Carnegie Library for future generations to enjoy, and with Apple's sensitive restoration of the spaces, the Historical Society will also renew its ability to present our city's rich and significant history to visitors and residents," said John T. Suau, Historical Society executive director. "We look forward to expanding our visibility in the historic Carnegie Library with new and creative ways to engage a 21st-century audience."

The Historical Society of Washington, D.C. is a community-supported educational and research organization that collects, interprets, and shares the history of our nation's capital. Founded in 1894, the Historical Society serves diverse audiences through its collections, public programs, exhibitions, and publications. In 1999 Congress granted $2 million and a 99-year lease to the Historical Society to use the Carnegie Library at Mt. Vernon Square, located across the street from the Walter E. Washington Convention Center, as a history museum about Washington, DC.

The Carnegie Library has served as the home of the Historical Society's museum and library since 2003. The Library is an integral part of the 200-year history of Mt. Vernon Square, a fast-growing area that has recently seen the construction of the Marriott Marquis Washington DC, Convention Center retail program, as well a host of new restaurants, retailers, and housing developments.

Oddly no statement from Apple was noted in the press release made public earlier today.