A new report published this morning states that Apple is removing virtual private network (VPN) services from its app store in China, VPN service providers said on Saturday, accusing the U.S. tech giant of bowing to pressure from Beijing to comply with stringent cyberspace regulations.

According to the report, "VPNs allow users to bypass China's so-called 'Great Firewall' aimed at restricting access to overseas sites.

Beijing has shut down dozens of China-based providers and it has been targeting overseas services as it bids to tighten its control over the internet, especially ahead of the Communist Party congress in August.

VPN provider ExpressVPN said on Saturday that it had received a notice from Apple that its software would be removed from the China App Store 'because it includes content that is illegal in China.' The notice is noted in the graphic below from ExpressVPN. 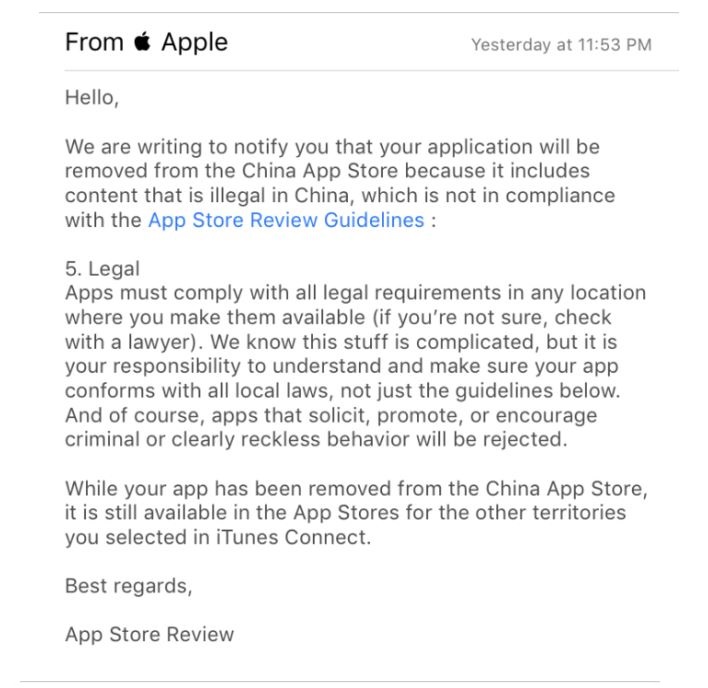 ExpressVPN said in a statement: 'We're disappointed in this development, as it represents the most drastic measure the Chinese government has taken to block the use of VPNs to date, and we are troubled to see Apple aiding China's censorship efforts.'" For more on this, read the full Reuters report here.

Apple declined to comment on the issue when contacted by Reuters on Saturday. Update: On Sunday July 30, Reuters updated their report by saying that an Apple spokeswoman confirmed it will remove apps that don't comply with the law from its China App Store, including services based outside the country.

Apple's CEO Tim Cook told ABC News last year that the law is the law and that they would comply with the law when necessary. If the Chinese government have a law that must be complied with, Apple will follow the law. So it's an odd slant to say that Apple is "bowing" to the Chinese Government. They're simply complying with the law of the land.