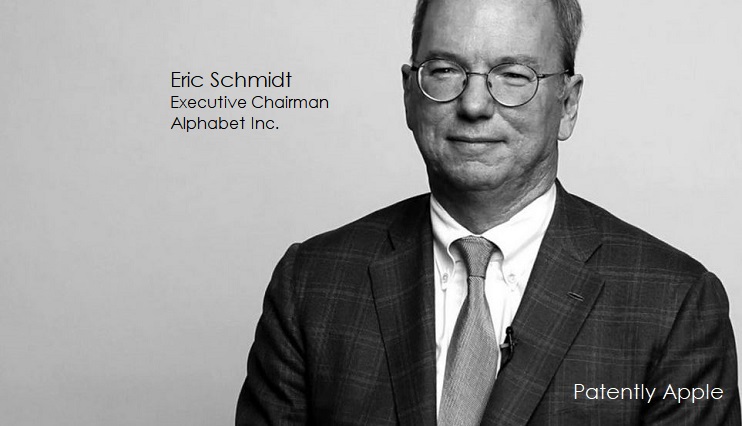 In March Patently Apple posted a report titled "A Report Ranking Leading Tech Companies on Digital Rights & Privacy Ranked Google #1 while Punishing Apple at #7." The report revealed a 2015 report by the U.K. tech site called 'The Register' claiming that Eric Schmidt was behind the foundation who wrote the report giving Google the top ranking in digital rights and privacy and ensuring that Apple was way down the list. The Register wrote: "Just fancy that! A Washington think tank chaired by Eric Schmidt, Alphabet Inc.’s executive chairman, has given Alphabet Inc. an award for "protecting your digital rights." The report went on to claim that "This is called 'policy laundering' – the act of legitimizing a policy, or attempting to seize control of a debate, via third parties. Another useful description is 'carousel propaganda,' coined by blogger Frank Fisher, an analogue of 'carousel fraud.'

Yesterday the Wall Street Journal (WSJ) posted a report titled "Paying Professors: Inside Google's Academic Influence Campaign." In it we learn that Google operates a little-known program to harness the brain power of university researchers to help sway opinion and public policy, cultivating financial relationships with professors at campuses from Harvard University to the University of California, Berkeley.

Over the past decade, Google has helped finance hundreds of research papers to defend against regulatory challenges of its market dominance, paying $5,000 to $400,000 for the work, The Wall Street Journal found.

Some researchers share their papers before publication and let Google give suggestions, according to thousands of pages of emails obtained by the Journal in public-records requests of more than a dozen university professors

The professors don't always reveal Google's backing in their research, and few disclosed the financial ties in subsequent articles on the same or similar topics, the Journal found.

University of Illinois law professor Paul Heald pitched an idea on copyrights he thought would be useful to Google, and he received $18,830 to fund the work. The paper, published in 2012, didn't mention his sponsor. "Oh, wow. No, I didn't. That's really bad," he said in an interview. "That's purely oversight." Sure, isn't that what everyone says when they get caught with their hand in the cookie jar?

Leslie Miller, Google's director of public policy, responded to the story in a blog post later on Tuesday, characterizing the report from the Campaign for Accountability, an advocacy group that compiled data used by the Journal, as "highly misleading." For more on this, read the full WSJ report here.

Google's Eric Schmidt turned out to be Judas to Apple's CEO Steve Jobs who was unaware that Google was working on Android while he sat on Apple's board while learning about Apple's secret iPhone. It was a conflict of interest that to this day I have no understanding as to why Apple didn't drag Schmidt into court.

So news of Google unethically paying professors to slant findings their way for cash isn't all that surprising. What's surprising is that they get away with this behavior without penalty. Thanks to the WSJ report, we get to read more about Google's shady political wing and their Fake News factory.