Advanced 3D Facial Recognition for Secure Authentication is a no brainer, but it Replacing Touch ID Completely is still in Question 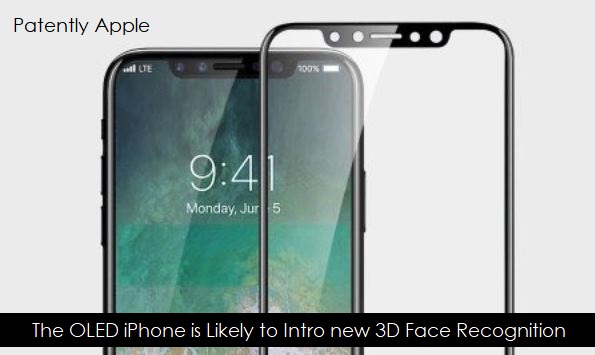 Earlier today Patently Apple posted a report titled "KGI Analyst publicizes his Latest Round of iPhone Predictions." Within that report analyst Ming-Chi Kuo made an oddball prediction that the anniversary iPhone with the OLED display would come with 3D sensing Facial Recognition and eliminate Touch ID. While I could see the high-end facial recognition acting as a superior method of authentication, it's still unclear how Apple Pay would use this feature when retailers aren't set up for it. So while there's no argument about the new feature, it's the elimination of Touch ID that's still puzzling and questionable. This afternoon Bloomberg also weighed in on the matter.

This afternoon Bloomberg reported that "Apple is testing an improved security system that allows users to log in, authenticate payments, and launch secure apps by scanning their face, according to people familiar with the product. This is powered by a new 3-D sensor, added the people, who asked not to be identified discussing technology that's still in development. The company is also testing eye scanning to augment the system, one of the people said."

The sensor's speed and accuracy are focal points of the feature. It can scan a user's face and unlock the iPhone within a few hundred milliseconds, the person said."

But like all good rumors, Bloomberg's report makes sure to say that "The feature is still being tested and may not appear with the new device." Not exactly something we can bank on to be sure. And testing it to replace Touch ID is again the feature that is debatable. No retailer cash system supports facial recognition and might be an issue not easily overcome. But like always, never discount what Apple is able to pull off.

Samsung introduced facial recognition with their new Galaxy S8 and industry experts were quick to point out that it was basically a gimmick and not a serious foolproof security measure.

Yet the industry is pushing towards that form of authentication as we posted a report on it in April titled "Microsoft Invents Iris ID for Unlocking a Future Surface Smartphone and other Devices."

The difference with Apple's implementation is that the OLED iPhone is rumored to be carrying a specialty 3D face camera using 3D sensor as noted in our cover graphic. This type of camera may provide Apple with the edge needed to push their facial recognition feature to a true pro level beyond the gimmickry of Samsung's Galaxy S8.

Will Apple use the advance facial recognition for fast secure authentication for login? That's a no brainer and one most will appreciate over time. But outright replacing Touch ID is where the current sticking point rests.

Could we see Apple testing the acceptance of the advanced facial recognition authentication to replace Touch ID when making purchases made at the App Store? Now that's a possibility I could imagine – but completely replacing Touch ID outright is still the point that is hard to imagine at the moment. If anything it will make for interesting debates online and more fun to see the keynote that will set the record straight in September.

Have an opinion on this stalemate? Send in your comments below.