Home Archives Contact Us Subscribe Twitter MeWe Facebook Patently Mobile
The First Official Law in the U.S. against Distracted Texters in a Crosswalk will take Effect this October in Honolulu
LG is the Official Second OLED Supplier for Apple that will deliver between 32 and 45 Million 6 inch Displays per Annum 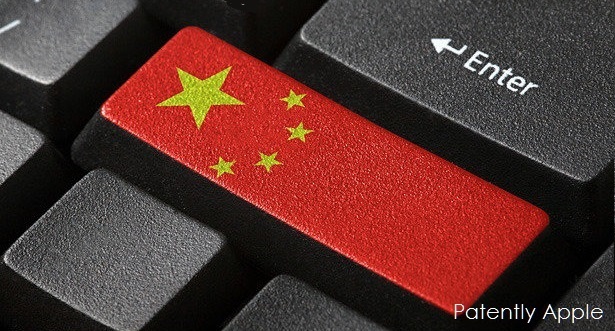 On Saturday Patently Apple posted a report titled "Apple Accused of Bowing to Chinese Government by Shutting Down VPN Service Apps." The report covered ExpressVPN making it public that Apple sent them a letter notifying them that their app was being removed from the App Store because it included content that is illegal in China, which is not in compliance with the App Store Review Guidelines. Apple's CEO has made it clear that they would follow the laws of the land that do business in. Today the Chinese Government made a formal statement to help clarify the VPN matter.

Today Zhang Feng, spokesman and general engineer of the Ministry of Industry and Information Technology (MIIT) stated that "China is tightening crackdowns on illegal internet connections, including unauthorized VPN (virtual private network) services, but the move will not affect legal users of authorized VPN technology that can help them bypass the country's 'Great Firewall.' The statement was made at a recent press conference in response to questions about China's VPN policy and business suspension of some VPN operators.

Zhang said that based on an MIIT notice released in early July, all special cable and VPN services in China need to obtain prior government approvals, otherwise they would be declared illegal and cracked down. The crackdown on unregulated Internet connections is aimed at strengthening cyberspace information security management, he added.

He stressed that domestic and international enterprises, as well as individuals using authorized VPNs to carry out cross-border business operations or interviews will not be affected by the rule.

It is a legal practice for some domestic trading companies or international businesses to file applications with authorized telecom firms offering international communication access services to rent special cables for their own in-house business uses, according to Zhang.

Different requirements and screening criteria are applied to different Internet businesses. For instance, for those who want to engage in Big Data, cloud computing and data center operations, the criteria will focus on how they can safeguard the interests of consumers, such as how they can provide consumers with quality, long-term, and safe services.

Apple is set to comply with China's Cyber Security Law by Partnering with 'Guizhou Cloud' to set up new Data Center.

While the issue came to light in the Apple community this past Saturday due to ExpressVPN making Apple's letter to them public, the fact is that this issue began much earlier and the government's position made clear. The video below provides an overview of the matter.

According to a Bloomberg report on July 10, "China's government has told telecommunications carriers to block individuals' access to virtual private networks by Feb. 1, people familiar with the matter said, thereby shutting a major window to the global internet.

The clampdown will shutter one of the main ways in which people both local and foreign still manage to access the global, unfiltered web on a daily basis. China has one of the world's most restrictive internet regimes, tightly policed by a coterie of government regulators intent on suppressing dissent to preserve social stability.