A new report published today states that the Indian government has sought investment and job creation details from iPhone maker Apple in order to facilitate setting up its proposed manufacturing facility in India.

The hindustan Times reports today that "A view on Apple's application for tax concessions would be taken up after considering the levels of investments and the benefits that are likely to accrue to the Indian economy, sources said.

Departments including revenue, electronics and information technology, and industry are deliberating upon the Cupertino-based technology major's proposal to set up smartphone manufacturing facility in India.

Earlier, Apple Inc had indicated to the government that it is ready with a blueprint to begin manufacturing iPhones in India, but wants fiscal concessions, including customs duty exemptions, duty waiver on import of components, permission to repair and re-export smartphones and continuation of certain tax incentives after implementation of Goods and Services Tax (GST). Sources added the government is actively considering their proposal."

Obviously what Apple is proposing is well beyond their initial manufacturing set up with Wistron. Interestingly the plan is under wraps. Yesterday Digitimes reported on Foxconn's Chairman talking about their investment in the US. You'll note in the partial screenshot of their report below that they noted that Foxconn has plans for India – without going into any details. These "plans" could very likely include a full-range iPhone plant. But until the Indian Government gives Apple the green light, project details will remain under lock and key. 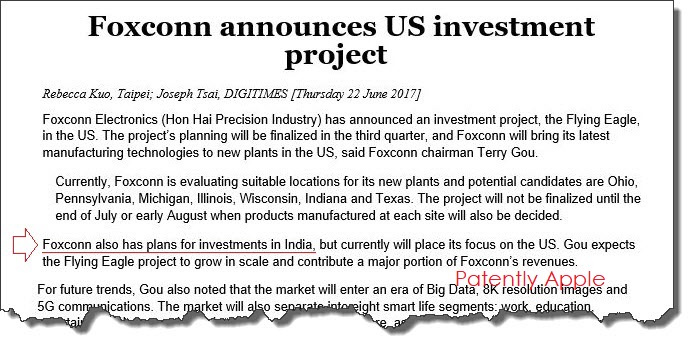 Yesterday Patently Apple posted a report titled "India: Apple is digging in for their Next Mass Market War." The report noted that Wall Street Journal had learned that flagship Apple Stores are being planned for a number of large city centers that would ignite Apple's war against Samsung and Chinese OEM's for market share with Apple aiming for the emerging middle class.