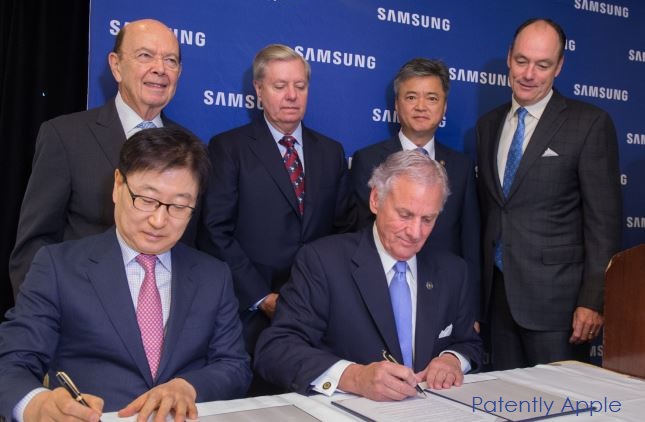 In March Patently Apple reported that three Southern U.S. States were battling it out for Samsung's new $300 million dollar appliance plant. Today we're learning that Samsung Electronics officially announced late yesterday that the company will build their appliance factory in South Carolina, marking the company's first major investment in the US since it relocated production facilities for US exports to Mexico in the early 1990s. The latest estimated cost for the plant will be $380 million dollars.

The announcement was made during South Korean President Moon Jae-in's visit to Washington for his first summit with US President Donald Trump as shown below. 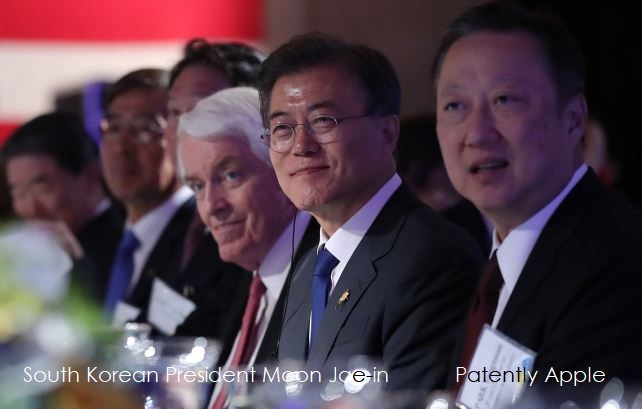 At the event held in Washington DC, Moon said that the Korea-US alliance has grown from one focused on security to include economic issues, and has become stronger in the process. And that his administration is working to resolve security issues on the peninsula on the foundations of Korea-US alliance.

"The new government will do its best to resolve the North Korean nuclear issue from the foundations of the firm Korea-US alliance," Moon said.

Yoon Boo-keun, president of the consumer electronics division of Samsung Electronics, flew to Washington, as part of a group of business leaders who accompanied the president, with the intention of making the announcement.

Yoon held a ceremony with South Carolina State Gov. Henry McMaster at a hotel in Washington to sign a letter of intent for the construction of the $380 million plant in Newberry County of South Carolina.

The new South Carolina plant is expected to help ease mounting pressure on Korean manufacturers from the Trump administration, amid its protectionist moves.

Once the facility begins full operations, it will create an estimated 950 new jobs, according to the company.

"Samsung will strengthen its 40-year long presence in the US by securing this new production hub, as well as enhancing ties with American consumers, engineers and businesses," Yoon said.

"Samsung's investment is great news for South Carolina and the United States, and it is a direct reflection of the fact that America is becoming an even stronger destination for global businesses looking to grow," said United States Commerce Secretary Wilbur Ross. "I congratulate Samsung on its expansion in the United States and wish the company success as it starts up its new facility in South Carolina."