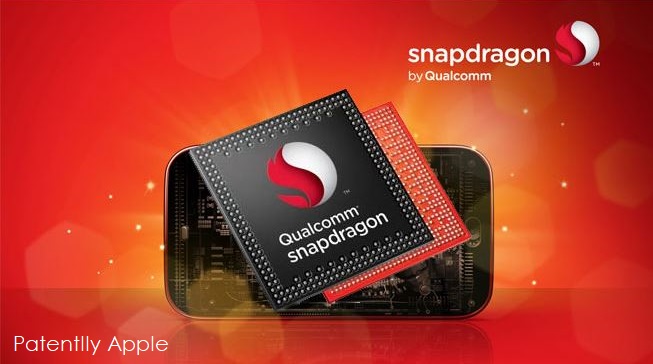 In a May report Patently Apple noted that TSMC had stated that they had already signed up 30 customers for their advanced 7nm chips with clients such as Apple, Nvidia, Huawei, MediaTek and Qualcomm. Today it became official that Qualcomm ended their consignment production with Samsung Electronics and has signed on with TSMC.

A Korean report this morning once again confirms that "Qualcomm has entrusted Taiwan's TSMC instead of Samsung Electronics to produce its next-generation 7-nano semiconductor chips and has ended consignment production (foundry) partnership between them. Previously Apple ended its business with Samsung Electronics and entrusted TSMC to produce its application processors (AP) of its Smartphones.

According to industry insiders yesterday, it is confirmed that Qualcomm has been designing and developing its next-generation 7-nano Snapdragon AP by using a chip development tool distributed by TSMC since second half of last year. Qualcomm is planning to mass-produce 7-nano Snapdragon APs between end of this year and early next year after first test wafer is manufactured from TSMC in this September and after it is done with designing of package and verification process."

In May Patently Apple posted a report titled "TSMC Executive Says they're testing 7nm Chips for 12 Top Customers & will Ramp up Production in H2 2018."

The Korean report further noted that "Sales from producing Qualcomm's APs and modem chips are around $1.78 billion (2 trillion KRW) and they take up about 40% of entire sales from foundry business. When these sales are gone, it is inevitable that Samsung Electronics' performance will drop sharply."

Last week Patently Apple posted a report titled "Future iPhone's will use 5nm Chips to Support AR, AI, Deep Learning and Provide Power for Days." In that report we covered Samsung's involvement with the IBM Alliance that was going full tilt to promote their 5nm processors under development. If Samsung lost Qualcomm for 7nm, they wanted to get the news out that their 5nm chips would provide great breakthrough advancements in an attempt to win new customers their way or old customers back.

Yet our report covered TSMC's work with extreme ultraviolet (EUV) lithography technology as well and that TSMC's chips were likely to match the advances being made by the IBM Alliance.

Last December Patently Apple posted a report titled "Samsung may Spin-Off its Foundry Division in the Hopes of Winning Back Apple's Chip Business." In that report we noted that a Korean report published back in May 2016 confirmed that "Samsung Electronics Co. backed by cutting-edge nanometer chip-making technology had confirmed that it would be creating a separate foundry division to expand their dominance in pure-play foundry business amid a boom in demand for semiconductors.

The report further noted that "It would be easier for Samsung Electronics to draw contracts as a separate division. Apple for instance has been reluctant in ordering application processing chips from Samsung as it competes directly with the company in smartphone market."

Global clients can entrust production to Samsung with greater ease when foundry and fabless are separated from each other as mentioned above; So Samsung's Kwon could be making a new pitch for Apple's processor business."

In context with today's news that Qualcomm is now onboard with TSMC, I'm more convinced that Samsung's meeting included a pitch for Apple's chip business to ease the pain of losing Qualcomm.

While I'd like to think that Apple has no intention of assisting Samsung when they have a viable alternative in TSMC, business is business and desperate Samsung may have made Apple a deal that they can't refuse.

While we won't know if such a deal was reached for some time down the road, for now, Samsung's chip business is destined to take a historic nose dive later next year.