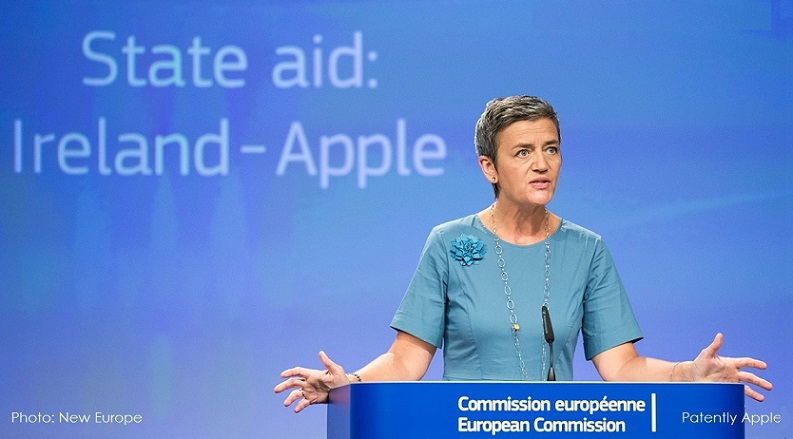 In late January Patently Apple posted a report titled "The EU Commission is Patient, even though Apple's Deadline to pay the €13bn Owed has long come and gone." Today we're learning that Ireland is seeking ways to indemnify itself against any losses stemming from holding about 13 billion euros ($14.5 billion) of Apple Inc.'s back taxes, according to two people familiar with the follow-up to last year's record-breaking European Union state-aid ruling.

Bloomberg reports that "As Apple prepares to hand over the money for safe keeping, Ireland wants to make sure it isn't left on the hook for any drop in the value of the fund during years of appeals at the EU courts, said the people who spoke on condition of anonymity because the negotiations on the structure of the proposed account are ongoing.

In an order that reverberated across the Atlantic, the European Commission last year slapped Apple with the multibillion-euro bill, saying Ireland granted unfair deals that reduced the company's effective corporate tax rate.

If the appeal, which could take as long as five years, is successful, the money will be returned to Apple. A Finance Ministry spokesman declined to comment."

Looking back, the Financial Times pointed out in January that the EU Competition Commissioner "Ms Vestager denied there was any attempt to single out US companies and said she was not concerned that the Apple ruling would affect US investment in Europe." And yet last month we reported that the EU Commission is preparing to Lay Down new Digital Policies for Europe to Punish Apple and Google.

So with the EU speaking from both sides of their mouth, are we to actually believe that the fix isn't in to make sure that Apple loses every appeal in back taxes case in Europe?

Last August we posted a report titled "U.S. Treasury Criticizes EU Tax Probe ahead of Apple Ruling." The report noted that "Today's response by the U.S. Treasury was one last chance at making it very clear and very public that the U.S. would be prepared to retaliate against a negative ruling against Apple or other major U.S. companies by the EU Commission."

Well, the ruling couldn't have been more negative. So what did the Obama administration do? You guessed it: Nothing. Do you know of any retaliation to date over the largest hit on an American company in history? What are they waiting for? Barking and not biting just makes the angry troll hungrier for more blood.

Before the EU Commission starts yet another public probe to hit Apple a second time, will the Trump administration hit back? While I won't hold my breath, I'm hoping that retaliation is in fact in the wings before there's a full out trade war; Something that Trump had no problem saying in public last month over German cars.