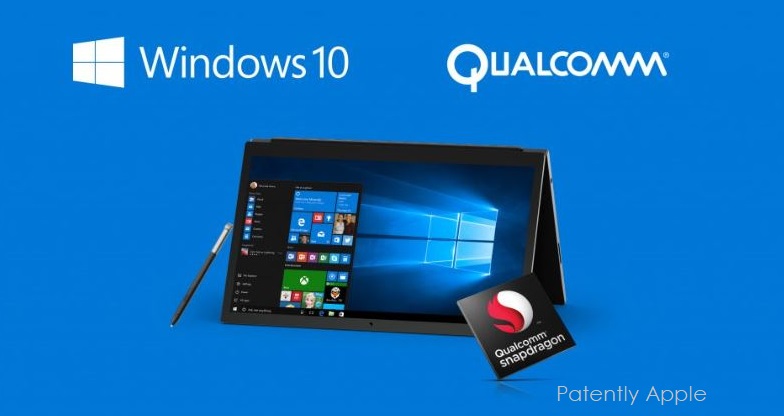 In December Patently Apple posted a report titled "Microsoft to Announce Qualcomm Snapdragon based Tablets and PCs with Built-In Cellular Capabilities." In April we reported that ARM confirmed that that a number of PC vendors would in fact ship 2-in-1 devices powered by Windows 10 on ARM processors. Late yesterday at Computex 2017, HP, Lenovo and Asustek announced that they will ship 2-in-1 devices using the Snapdragon 835 chips featuring an integrated X16 Gigabit LTE modem later this year.

Asustek, HP and Lenovo are set to each produce sleek, thin and fanless PCs running Windows 10 with LTE connectivity for an always connected, on the go experience, Qualcomm said. Coupled with the 10nm leading node efficiency of the Snapdragon 835 mobile PC platform, these devices will feature beyond all-day battery life, the company added.

Cristiano Amon, executive vice president, Qualcomm Technologies, Inc., and president, QCT stated in their press release that 'Today's consumers experience mobility in nearly every aspect of their lives and they've come to expect more from their PCs than legacy computing models are able to provide. With compatibility for the Windows 10 ecosystem, the Snapdragon Mobile PC Platform will enable Windows 10 hardware makers to develop next-generation modern device form factors and deliver unparalleled anything, anywhere creation experiences with up to Gigabit Class LTE connectivity."

Jerry Shen, chief executive officer, ASUS added that "The PC ecosystem continues to evolve, and this evolution requires new innovations in an ever-increasing mobile computing world. With the Snapdragon Mobile PC Platform powering our new lineup of Windows 10 devices, our users now can take advantage of new always on, always connected experiences available to them."

Jeff Meredith, senior vice president and general manager, PCs and smart devices, consumer business segment, Lenovo noted that "Today's PC users want solutions that provide better battery life and the ability to connect anytime, anywhere, while also being lighter and more portable than any other laptop currently available," said "We're excited to work with Microsoft and Qualcomm Technologies to bring a whole new class of devices to consumers that will change the future of personal computing."

And lastly Matt Barlow, corporate VP of Windows marketing at Microsoft added to the Qualcomm press release by stating that "We are thrilled that OEMs are sharing our vision to bring the Windows 10 experience to the ARM ecosystem, powered by Qualcomm Technologies. This collaboration offers consumers something new and that they have been craving, the best of a mobile computing experience with the best of Windows 10, all in one thin, light, connected device."

The Snapdragon 835 will provide these next-gen devices with superior thermal handling and greater power efficiency, enabling fanless designs with longer battery life, attributed to it being on the leading 10nm process node. With an integrated Snapdragon X16 Gigabit LTE modem, devices will be capable of peak download speeds of up to 1Gbps. The Snapdragon 835 Mobile PC Platform will also feature 802.11ac with 2x2 MU-MIMO for optimal Wi-Fi connectivity on the go.

Microsoft's Surface tablets and Surface Book will now be joined by HP, Lenovo and Asus (and perhaps Huawei) in pushing Windows 10 for 2-in-1 form factors this fall to take on Apple's iPad Pro that remains the number one tablet around the world.