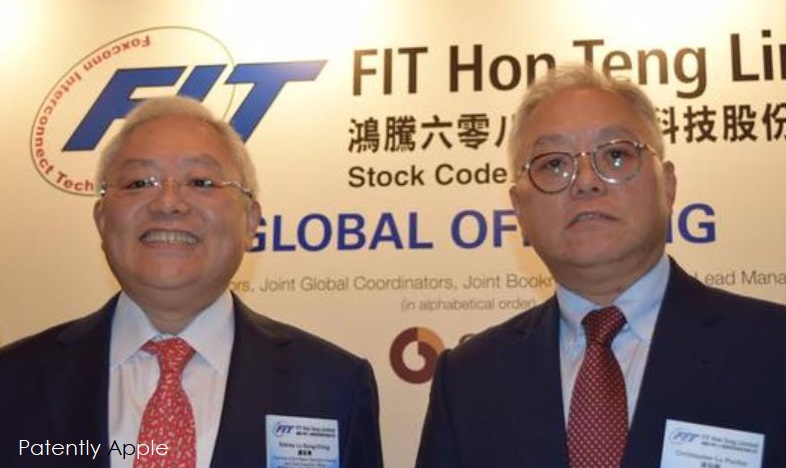 FIT Hong Teng, an electronic connector and cable maker controlled by Taiwan-based Hon Hai Precision Industry, said on Wednesday that it hoped to raise $2.7 billion Hong Kong dollars ($350 million) from an initial public offering in Hong Kong. FIT was spun off from the contract electronics giant Foxconn in April 2013 as part of its streamlining process. Foxconn still holds 92.57% of FIT. According to a new Nikkei report, FIT wii be expanding into the U.S. on the suggestion from Apple.

Specifically, the Nikkei report stated that "The move was in line with a plan by Hon Hai, better known as Foxconn Technology, to establish a manufacturing base in the U.S. "at Apple's suggestion."

Foxconn Chairman Terry Gou said in January that the group was considering building a highly automated display panel production facility and a molding facility in the U.S. Foxconn is a key iPhone assembler."

Patently Apple posted a report last week titled "Foxconn's 'Flying Eagle' Project worth Billions in U.S. Investment Could Cover Displays, Semiconductor Packaging and more." The "more" in our byline now has another face attached to it and it's Foxconn's FIT.

Apple has committed to a $1 billion investment in new U.S. Jobs and encouraging Foxconn and FIT to invest in the U.S. is nice work on the part of Apple's CEO Tim Cook.