The official polling partner for POLITICO, Fortune and Bloomberg News has done poll on home devices using digital assistants like Echo, Google Home, Apple's new HomePod and others. The poll conducted June 8-12 asked people which feature is most important in purchasing a home assistant. Thirty percent of respondents selected price, more than double the 14 percent who said accuracy of the device's voice recognition is the top priority. (Another 18 percent said they didn't know or had no opinion.)

When asked separately about which factors matter, features become more important, but nothing topped price: Seventy-nine percent of people said the cost was important when considering purchasing a smart device, versus 63 percent who said the same for brand. Other key factors included speaker and audio quality, compatibility with other devices, and accuracy of voice recognition. 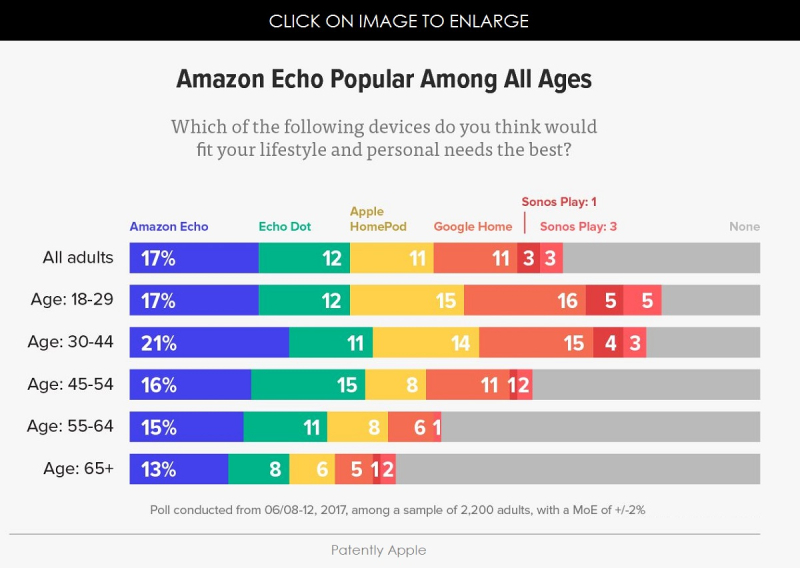 Yet the lowest price was Google Home at US$129 and yet Amazon's Echo at US$180 did better. Apple's HomePod came in nicely in-between their main competitors in this category at close to double the price of the Echo.

Separate data suggests Apple's brand rules in the realm of virtual assistants on phones: Polling from March showed Apple's assistant Siri was the most popular among the key demographics of millennials and Gen X, who tended to use it for mundane tasks such as answering texts.

The study conducted by Morning Consult was done among 2,200 adults between June 10-12. In the end, if Apple is lucky enough to get over 40% of their fan base to buy a HomePod, they'll have a smash hit on their hands. Apple Watch came nowhere near 40% of Apple's fan base. But a survey on something this new is, in my humble opinion, a little overly optimistic. Apple fans are still coming off the high of the WWDC Keynote news. The real test of course will be this Christmas when they'll vote with their wallets. Then we'll see if this poll really nailed it down.