Home Archives Contact Us Subscribe Twitter MeWe Facebook Patently Mobile
The 'Five Eyes' Intelligence Network backed by the U.S. and UK are Set to Tackle the Problem of Encrypted Messaging
Take a Look Back at a 2006 iPhone Patent & new Interview with iPhone Team Leaders Fadell, Forstall and Christie 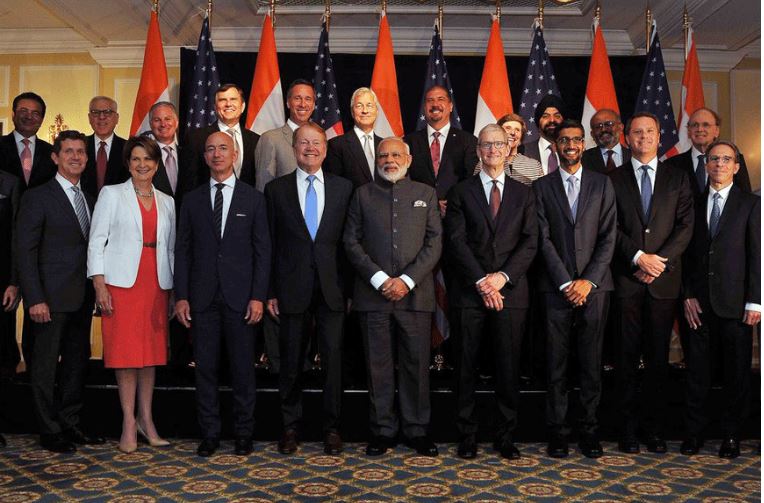 Today, twenty-one of Silicon Valley's top leaders met with India's Prime Minister Narendra Modi who is in the US on the second leg of his three-nation tour. PM Modi will hold his first bilateral meeting with President Donald Trump at a working dinner at the White House on Monday. In our cover graphic, you're able to see India's PM Modi centered between Apple's CEO Tim Cook and Cisco's executive chairman John Chambers.

Currently India doesn't have a formal alliance with the US, but defense ties have intensified in recent years with joint drills between the two militaries and defense sales. India, which has traditionally bought most of its defense equipment from Russia, is looking to upgrade its capabilities. Since 2008, India has signed more than $15 billion in US defense contracts, including for C-130J and C-17 transport aircraft, P-8I maritime patrol aircraft, Harpoon missiles and Apache and Chinook helicopters.

Days before the Modi-Trump meeting, the Trump administration authorized the sale of unarmed surveillance drones to India. India had initiated the request to buy 22 Guardian MQ-9B unmanned aircraft for maritime surveillance last year. The deal is estimated to be worth about $2 billion and is still subject to congressional approval. The green light marked a further deepening in defense ties.

Regional security is expected to be high on the agenda for the talks. The Trump administration has indicated it could take a tougher stance on Pakistan, which India has long accused of harboring militant groups.

Lastly, it was reported that Apple's CEO Tim Cook reached Hotel Willard Inter-Continental, Washington DC, very early this morning to meet Prime Minister Narendra Modi. There was no word as to what the two discussed.