While Apple's AirPods are the new rage, Apple customers are also able to choose alternative headsets like the BeatsX styled headphones. BeatsX offers "optimized noise isolation." Today's invention covers an integrated MEMS microphone and vibration sensor die that can be used to eliminate unwanted sounds and improve vocal sound detection. It would seem that future BeatsX and other headphones may be able to go from "noise isolation" to pure noise elimination/cancellation with this latest advancement in Apple's headphone technology.

Contemporary electronics and portable electronic devices commonly include one or more microphones, and as more features are being introduced, more than one microphone may be included for complex audio processing. One such microphone is the electret condenser microphone (ECM) that includes a capacitive sensing plate and a field effect transistor (FET) amplifier. The FET amplifier can be in an integrated circuit (IC) die located within the microphone package enclosure. The IC die may additionally include an analog to digital converter (ADC) for digital microphone applications.

More recently, micro-electro-mechanical systems (MEMS) microphones have been introduced. Similar to an ECM, a MEMS microphone may feature capacitive sensing with a fixed diaphragm. In addition to an amplifier and ADC, a MEMS IC die may include a charge pump to bias to diaphragm.

ECM and MEMS microphone packages include a sound inlet, or hole, adjacent the capacitive sensing plate or membrane for operation, e.g., to allow the passage of sound waves that are external for the package. A particle filter may be provided in order to mitigate the impact of particles on operation. Sound waves entering through the sound inlet exert a pressure on the capacitive sensing plate or membrane, and an electrical signal representing the change a capacitance is generated.

Recently MEMS microphones have been adapted for use in mobile electronic devices such as smartphones, music players and mobile computers. In portable devices, however, the interference from unwanted environmental sounds (e.g., noise) becomes more problematic for audio sensing. Many of the technologies developed for eliminating or cancelling unwanted sounds use conventional microphones that detect sound through air. Such systems, however, may face challenges when it comes to distinguishing between desirable sounds falling within frequency ranges typical of unwanted sounds (e.g., low frequency ranges).

Apple's invention generally relates to a micro-electro-mechanical systems MEMS microphone and MEMS vibration sensor that are integrated as one, at the die or in some cases, the package, level.

Representatively, in one embodiment, the MEMS vibration sensor may be used to detect low frequency sounds using mechanical vibrations of the skin near the vocal cord of a user (e.g., the neck). The MEMS microphone may be designed to use air pressure changes in the air to detect vocal sounds that are outside of (e.g., higher), or overlapping with, the frequency range detectable by the vibration sensor. In this aspect, when vocal sound detection is desired yet a level of unwanted environmental sound is high (e.g., the user is in a subway, airport, traffic or at a rock concert), the MEMS vibration sensor instead of (or in addition to) the MEMS microphone may be used to detect the vocal sound using mechanical vibrations. The device therefore provides the advantage of being able to detect vocal sounds through vibration and/or air, and can be used to eliminate and/or minimize unwanted sounds in loud environments and improve vocal sound detection quality. 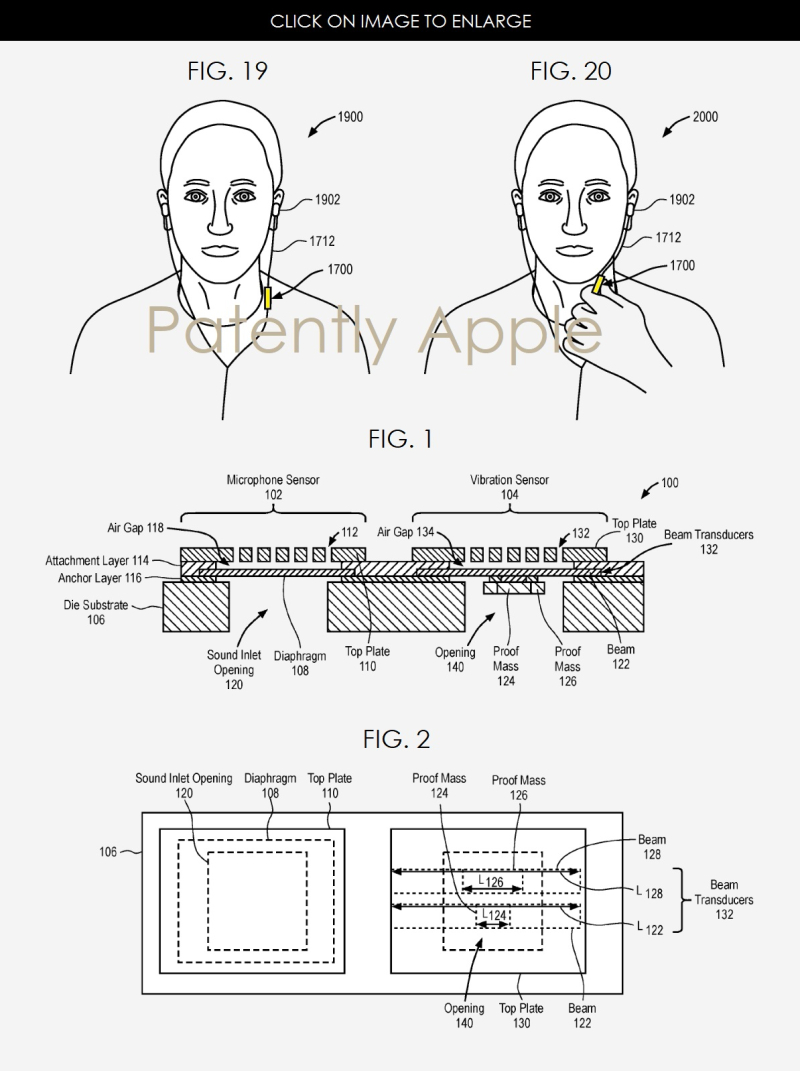 In particular, in FIG. 19, in the normal mode #1900, a user is shown with the headphones #1902 (e.g., earbuds) positioned in each ear and remote controller #1700 hanging from headphones #1902 by cord #1712. This is considered a "normal mode" in that the remote controller is being used to control the headphone operations, or for normal microphone operations (e.g., to pick up vocal sounds through the air).

Apple's patent application 20170156002 was filed back in January 2016. For more details about this invention, click here. Considering that this is a patent application, the timing of such a product to market is unknown at this time.