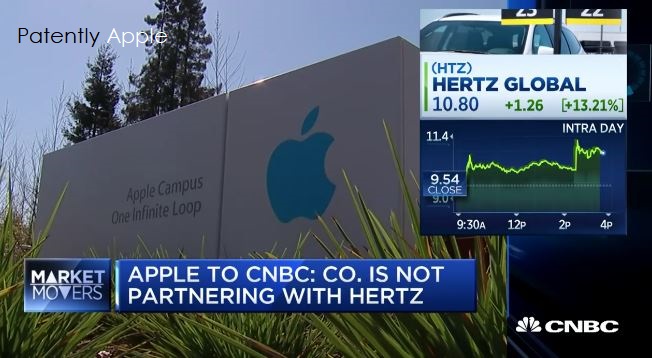 Earlier this month Patently Apple posted a report titled "Apple's CEO Confirms Project Titan is the 'Mother of all AI Projects' Focused on Self-Driving Vehicles." In the report Apple's CEO finally went on record about Project Titan by noting that "We're focusing on autonomous systems. Cook further revealed that "There is a major disruption looming there," citing self-driving technology, electric vehicles and ride-hailing. Today another bombshell about Project Titan came to light.

According to a new Bloomberg report this afternoon, "Shares in Avis Budget Group and Hertz Global Holding jumped in trading Monday after it was reported the two rental-car giants forged respective self-driving auto deals with Google-parent Alphabet and Apple.

However, Apple tells CNBC that no such partnership with Hertz has been made.