Today the US Patent & Trademark Office published patent application 20170160209 from Apple titled "Testing Diffraction or Diffusion of a Light Beam." Apple's patent is not consumer friendly by any means but it can be appreciated by engineers who specialize in the area 3D Mapping. Our archives cover many 3D mapping inventions, mainly from Apple's Israeli team that was formerly known as PrimeSense.

Such depth mapping may be applied, for example, to user interfaces that are based on gesture recognition."

Gesture recognition could come into play in relation to future Apple smartglasses with a camera built in as one possible application. Another could be uses with a future iMac with a new camera that could understand gestures as supported by these Apple Inventions: One and two. 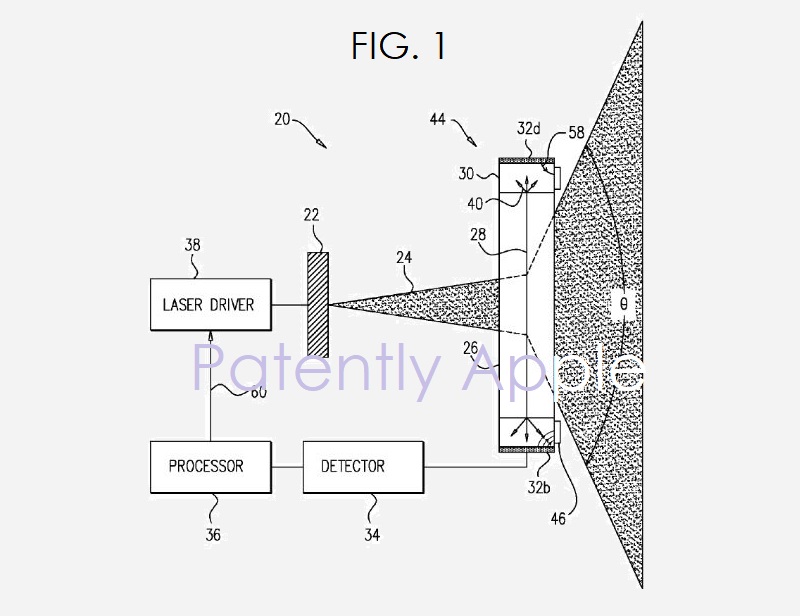 Apple's patent FIG. 1, which is a schematic illustration of a system 20 for testing diffraction of a light beam.

Apple notes that U.S. Patent 6,862,076 is incorporated into Apple's invention which relates to a "projection system." According to Wikipedia, 3D mapping is also known as projection mapping, also known as spatial augmented reality. You can learn a little more about projecting mapping at this site that presents a series of videos showing different applications that projection mapping is used for including gaming, the smart home and more.

Our cover graphic covers apparatus #44 comprises a photosensitive semiconductor #30, comprising, for example, silicon, and/or any other suitable material. Semiconductor #30 is shaped to define an aperture, such as a rectangular (e.g., square-shaped) or circular aperture (of a camera). The system also comprises a light source, such as a laser #22, which is driven by a laser driver to direct a light beam through a DOE which typically comprises a diffractive lens.

Apple's patent application was filed back in Q4 2015. For more details about this invention, click here. Considering that this is a patent application, the timing of such a product to market is unknown at this time.

One of the inventors is Jawad Nawasra who is also credited with another 3D mapping app titled Time-of-flight depth mapping with flexible scan pattern. The other listed inventor is Yazan Alnahhas who is Apple's "Camera Lead Design Engineer." Suffice to say that Apple's patent relates to future iDevice and Mac camera applications.