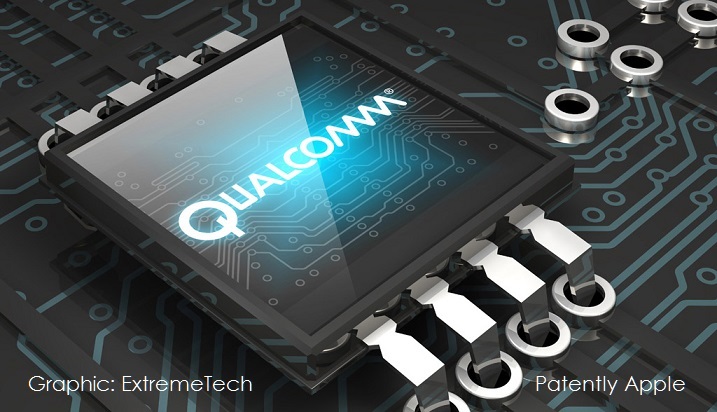 In January Patently Apple posted a report titled "The U.S. Fair Trade Commission Sues Qualcomm for Forcing Apple to use its Chips in iDevices." The report noted that the U.S. Fair Trade Commission filed a lawsuit against Qualcomm accusing the biggest maker of mobile phone chips of illegally maintaining a monopoly over semiconductors used in cellphones and pocketing elevated royalties from customers. Earlier today the FTC responded to Qualcomm's motion to dismiss the case.

The FTC argued that Qualcomm's customers "accept elevated patent royalties they otherwise would refuse" only because they are forced "to negotiate in the shadow of Qualcomm's threat to withhold chips." As a result, "Qualcomm collects far more in royalties than other licensors in the industry with comparable patent portfolios."

C/NET's report noted that "It's also being reported that Samsung, Samsung, the world's biggest handset maker, hasn't filed any lawsuits against Qualcomm, but it did file an amicus brief in support of the FTC on Friday, saying the court shouldn't dismiss the antitrust suit. In it, the company noted that it's a Qualcomm customer (it uses Qualcomm's chips in devices like the Galaxy S8), and it's also a potential competitor (Samsung builds and sells chips).

'In both capacities, Samsung has directly experienced, and been directly harmed by, the exclusionary conduct alleged in the FTC's complaint,' it said in a court filing Friday. '"Qualcomm refuses to license its [standard essential patents] on fair, reasonable, and on-discriminatory ... terms so that Samsung can make and can sell licensed chipsets. Given its position, Samsung is uniquely situated to assist the court in understanding the important antitrust principles at stake in this case.'

Samsung said in its filing that Qualcomm agreed to fairly license its technology if standards bodies adopt tech that required the use of Qualcomm patents. But the South Korean company said Qualcomm hasn't kept its side of the bargain. Instead of licensing its standard essential patents to rival chipmakers, it only gives licenses to handset manufacturers.

Intel, one of Qualcomm's main rivals in semiconductors, also filed an amicus brief on Friday. The company, which was late and has struggled in the mobile chip market, became a supplier of iPhone mobile chips in Apple's latest models, the iPhone 7 and 7 Plus.

'Although Qualcomm has driven nearly all of its competitors out of the premium LTE chipset market, Intel has not thrown in the towel,' Intel said in a court filing.

The company noted that Qualcomm's business dealings with Apple 'put Intel's commercial success at risk and will do so in the future if Qualcomm is allowed to persist in its anticompetitive tactics. As the only remaining competitor in the premium LTE chipset market ... any harm to Intel's premium chipset business will have profound anticompetitive effects on the market as a whole.'"

For more on this, you could also check out FOSS Patents report here. The report provides a full copy of the FTC's Opposition to QCOM's Motion to dismiss along with Florian Mueller's top notch commentary on the case.

Other Recent Reports on Apple - Qualcomm