Within the last year Apple patent filings have covered a selfie camera for their Apple Watch (graphic below) and a secondary display built into the band. Is it any surprise then that a new Samsung's patent for similar features has just surfaced? No – as Apple and Samsung are always on a war footing trying to outdo the other. On one hand I'd like to laugh at the Samsung idea of a zoom camera lens designed to protrude through the display while on the other hand I'd be amazed if they could actually pull it off. The lens cover would appear to be a part of the display until a photo is taken using the zoom lens which would push outward. I still can't wrap my head around the idea being that a digital zoom would suffice. But only time will tell which route Samsung takes.

For now, both Apple and Samsung are racing to introduce a camera and a band display into their respective smartwatches. With Apple leading the smartwatch market globally and Samsung far behind, Samsung has to take more chances if they hope to catch up with the Apple Watch. Though with consumer's obsessed with taking selfies, it's likely to be a feature both want to bring to market sooner rather than later. This may end up being the feature of the year.

Of course there's a little more to the patent than their patent abstract. For instance, the camera will offer zoom capabilities as noted in patent FIG. 11 below. 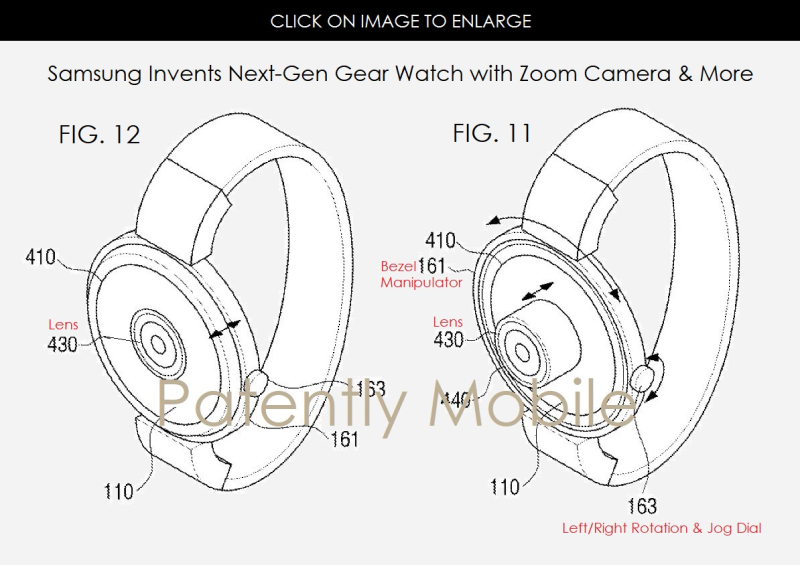 Samsung further notes that "in the case where the type of lens #430 is formed in the central region #440 of the display #110 is a barrel lens, the lens may protrude externally and perform a zoom-in/zoom-out operation. That is, the lens may protrude externally or be inserted into the body #410 based on a manipulating direction of the bezel manipulator 161 and the jog dial #163.