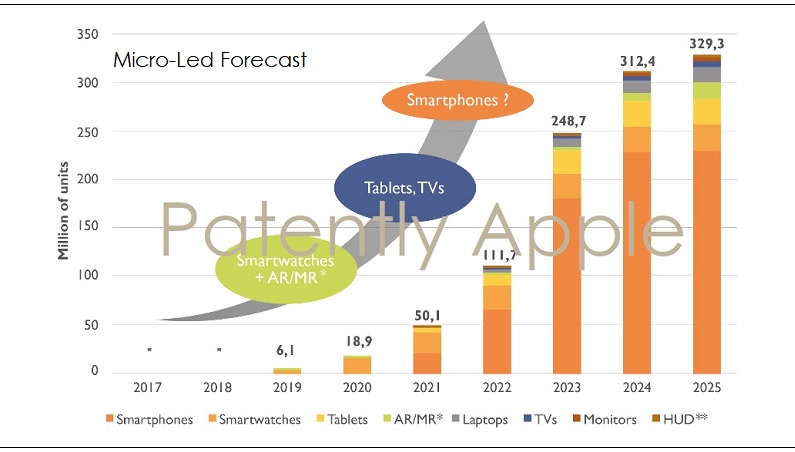 On Monday Patently Apple posted a report titled "Foxconn-Sharp to Acquire a U.S. micro-LED Display Startup," which covered a lot of ground regarding the next generation display that could one day sweep the industry. We also provided a video in a secondary report that touched on the breakthrough that Apple's LuxVue micro-LED team will bring to the table in the not-too-distant future. Today the news about micro-LED keeps pouring in with news of trial runs being scheduled in the 2017-2018 timeline.

A new supply chain report surfacing today notes that "a few makers engaged in R&D for micro-LED display products, despite many technological bottlenecks, are expected to take the initiative to begin trial production in the second half of 2017 at the earliest, according to industry sources.

Apple has been keen in the development of micro LED technology following its acquisition of LuxVue in 2014, and recent market speculations also indicate that Apple is likely to crank out a small volume of micro-LED display products from its plant in Taoyuan, northern Taiwan at the end of the year.

Taiwan-based innovative startup PlayNitride, which was reportedly targeted by Samsung Electronics for possible acquisition, is expected to install a production line for trial production of micro-LED products in the second half of 2017, the sources indicated.

PlayNitride uses a mass transfer process that mounts micro-LED chips on TFT (thin film transistor) substrates, and the company has been exerting efforts to improve the yield rate for its RGB micro-LED displays, indicated the sources.

PlayNitride said that it is expected to team up with terminal device makers to engage in product design and development using its micro-LED technoloy in 2018, which may pave the way for mature products for applications including VR/AR, smartphone and TV devices to hit the market in 2019.

Taiwan's government-sponsored Industrial Technology Research Institute (ITRI), which has been developing micro-LED technology for a long time, is also expected to tie up with local businesses to begin trial production of micro LED displays in 2018, using ITRI in-house developed technology , added the sources.

The competition in the segment heated up recently after Foxconn Electronics announced that it plans to acquire display startup eLux for US$27.03 million in cash via four subsidiaries, including Sharp, for development of next-generation micro-LED display technology.

The acquisition could provide a fast track for Foxconn to commercialize micro-LED technology, commented the sources.