Google Assistant is now Available for iOS and Google Home will be Offering Free Phone Calls within the U.S. and Canada 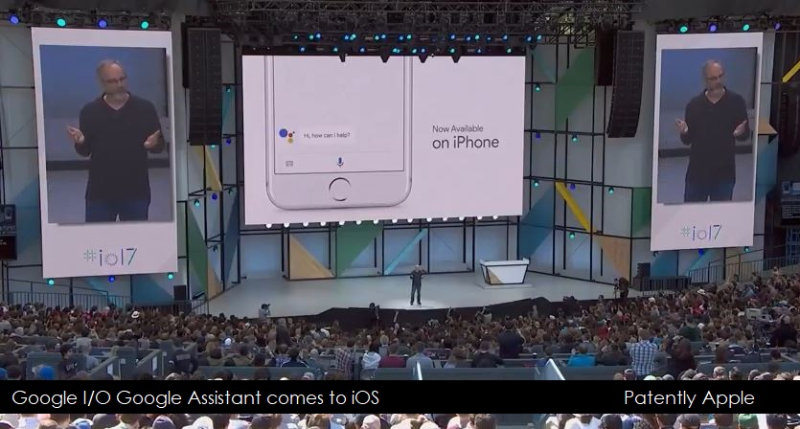 You can usually learn something new watching a developer conference, whether it's from Apple, Microsoft or yes, even Google. Last week we learned about Microsoft's updates to HoloLens, their new Digital Pen input and a new Windows 10 UI coming with subtle 3D effects this fall. If the new Windows 10 UI is successful, you could bet that 3D UI's from competitors are sure to follow. Today at Google I/O 2017 there was a lot of little things of mild interest, among them Google Assistant coming to iOS as noted in our cover graphic. That announcement received a lot of applause from a pro-Android developer audience which was both strange and interesting. Today's report provides our audience with the full Google I/O conference video along with a few highlights of new features of interest in the form of screenshots from today's keynote. 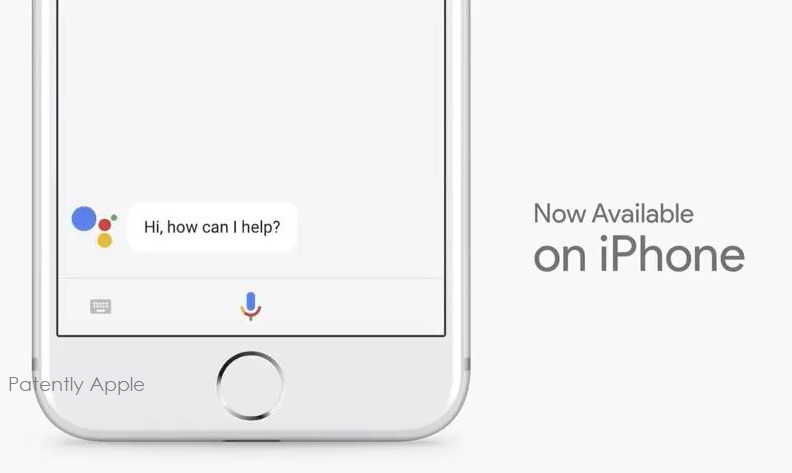 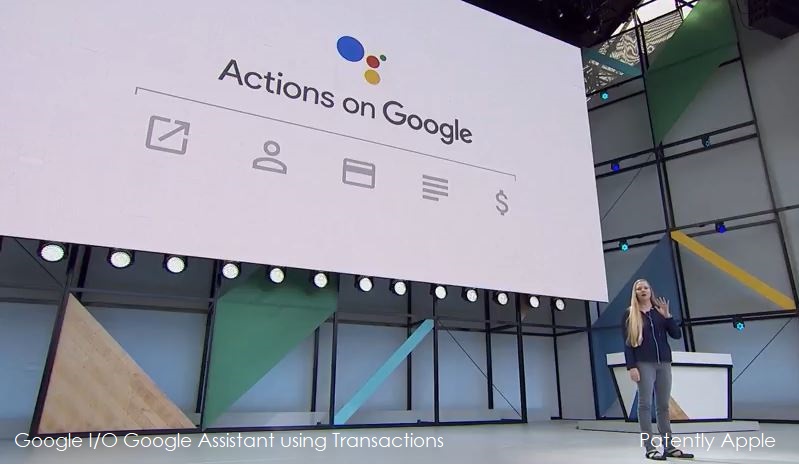 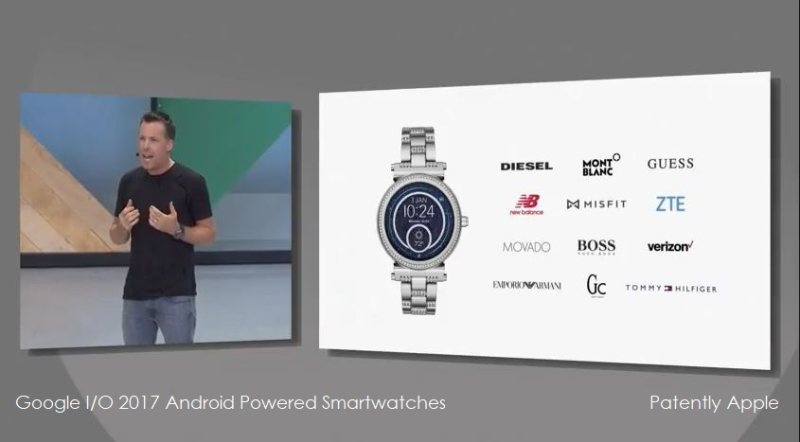 The Android OS chief told his audience that Android powers 24 of the top Smartwatches in the world. Keep in mind that Apple Watch was the #1 globally in Q1 2017 and no other "Top Brand" within the premium class brands noted in Google's slide matched or even came close to the Apple Watch. It has potential, but it's not there yet. 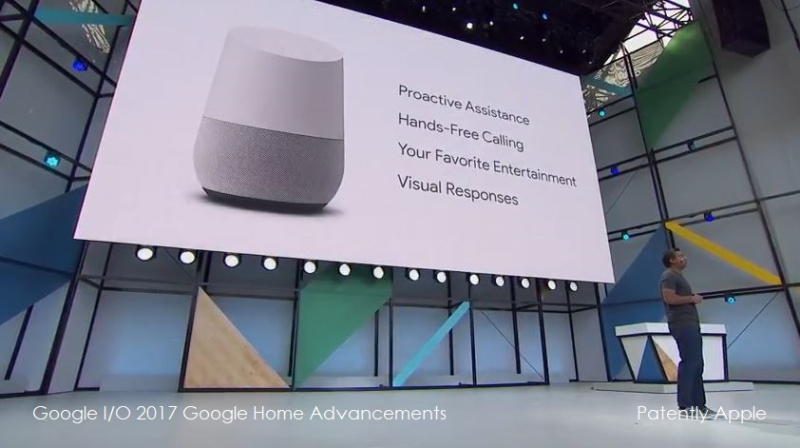 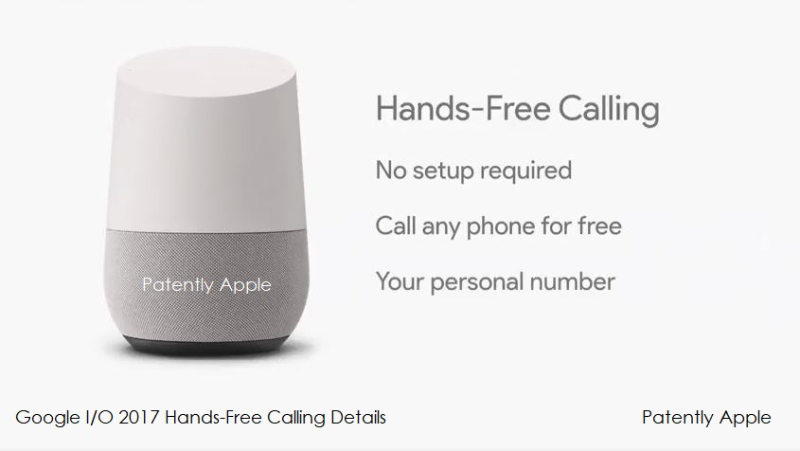 I sure hope that the rumors about an Apple Siri based speaker device coming to life at their WWDC 2017 event, because Google Home just landed some serious punches with their new Google Home device. It may be a killer app for Google. Call anywhere in Canada or the U.S.A. for free when using Google Home. 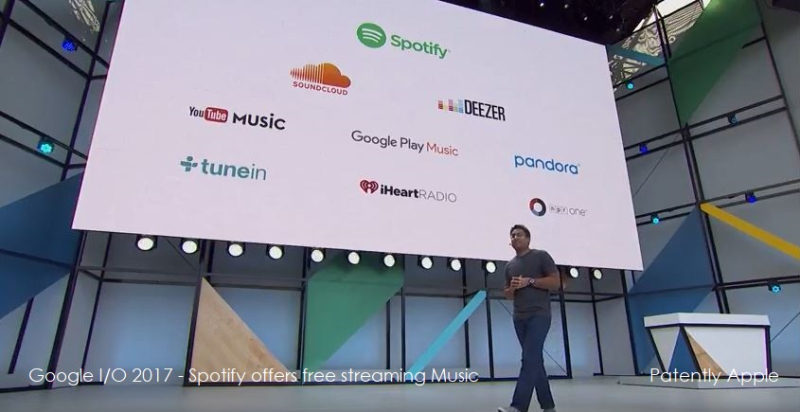 Google announced that free music streaming from Spotify will come with Google Home with other services being made available. 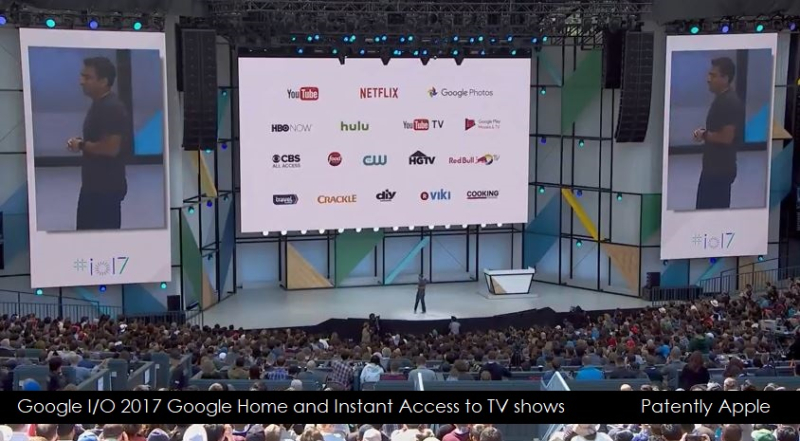 Google's presenter stated that yes, you need a display with Google Home at times, but you don't need an integrated display because Google Home / Google Assistant will use any screen near you to display your content if needed. You can ask Google's Assistant to show you what's new on YouTube or any other TV service noted on their slide. You can ask Google Home to show you pictures of your recent holiday or call up maps by simply asking – and the results could show up on your iPhone, iPad, Android devices or TV. 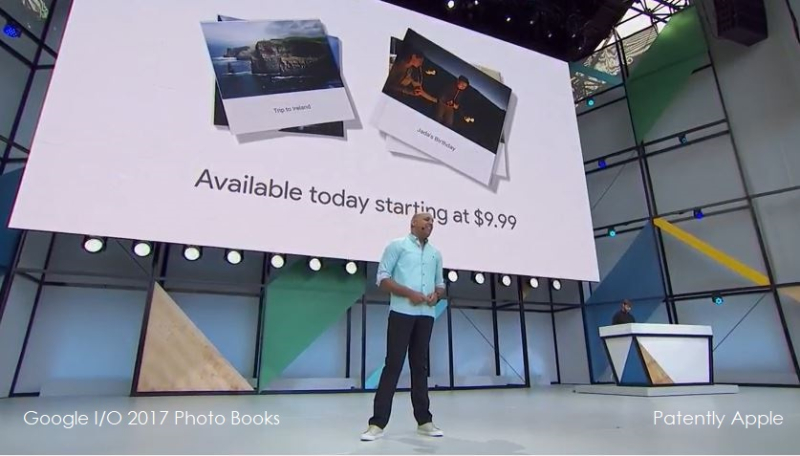 Why not take a page form Apple's playbook again and introduce something revolutionary like photo books.

Android's Next Version of OS is 'O' 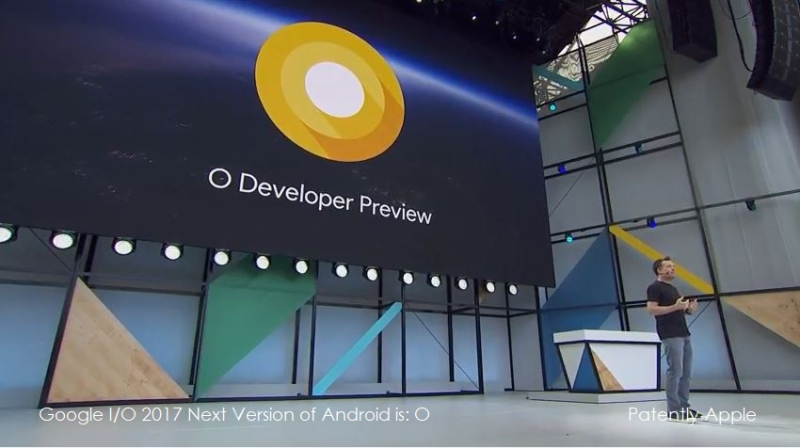 The next version of Android coming this summer is brand named Zero. Okay, It's really 'O' as in the letter. 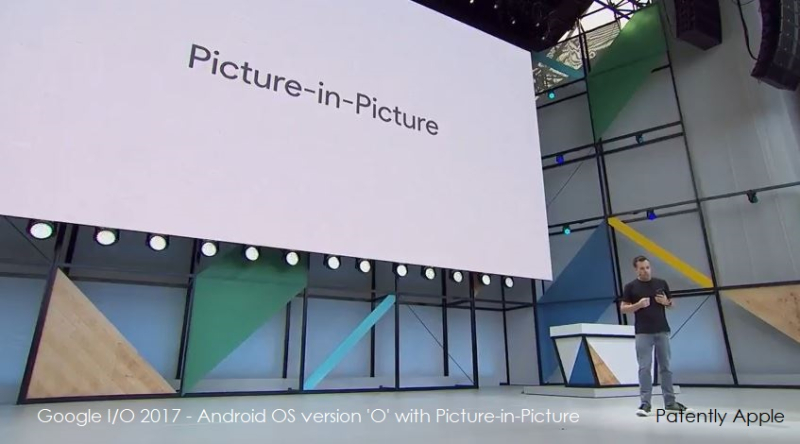 Google introduced 'Picture-in-Picture' for Android 'O' which is a nice feature. You could be video conferencing, reduce the video, tap on your calendar or any app and work on it as you talk. You could be watching a YouTube video while writing a long email. You get the picture. 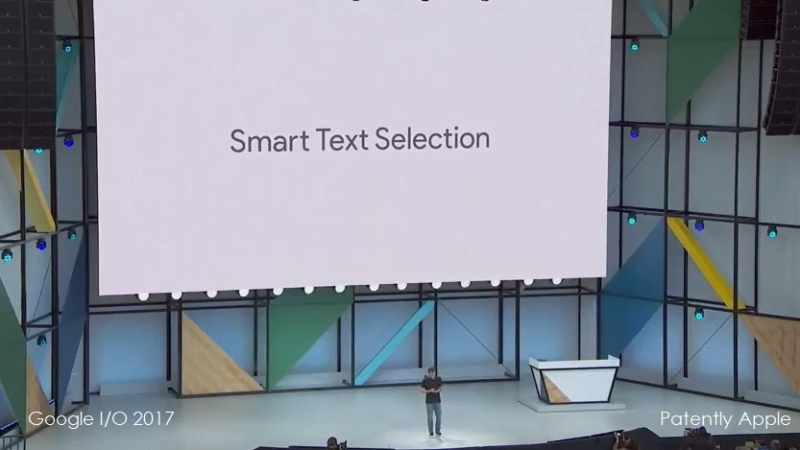 Cut and paste now kills text-handles (Yeah). I hate Apple's cut and paste with text handles. They're so annoying. In Android 'O' you simply tap on the screen where the first dot goes and tap again for the second dot, done. You can double tap on an address, and it copies it all. You can tap on a phone number, and all of it's copied. You could also click on one extra button and you can call up a map for the address or make a phone call instantly from your highlighted text. Nice. 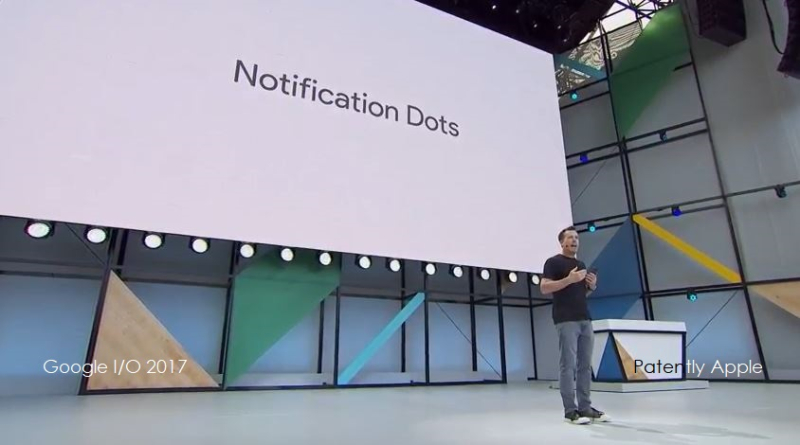 Apple provides a dot above your mail to tell you how many messages are waiting or to tell you that there is an update ready. Android 'O' brings that feature to Android users calling it Notification Dots. Below is an example of a notification on my iPhone. Is it not a dot? Ha! 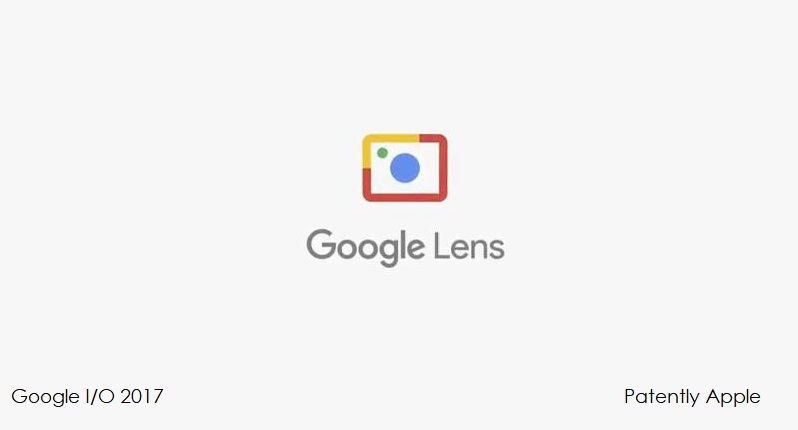 Google Lens could be a huge hit. The feature is like a precursor to Augmented Reality. A user could take a photo and with one click get information about it. You could be in Chicago taking a photo of the tallest building and in one click you'll see 'Willis Tower' labeled on your photo. Or you could be in a museum taking a photo of a favorite work and in one click it'll reveal the artist and other relevant information.

Better yet, you could take a photo of a poster of an upcoming event and in one click you could have access to Ticketmaster and details of the upcoming event. This might be something coming to iPhone 8, so on that note it was interesting to see unfold today. Google is going to work this feature into other apps in the future. 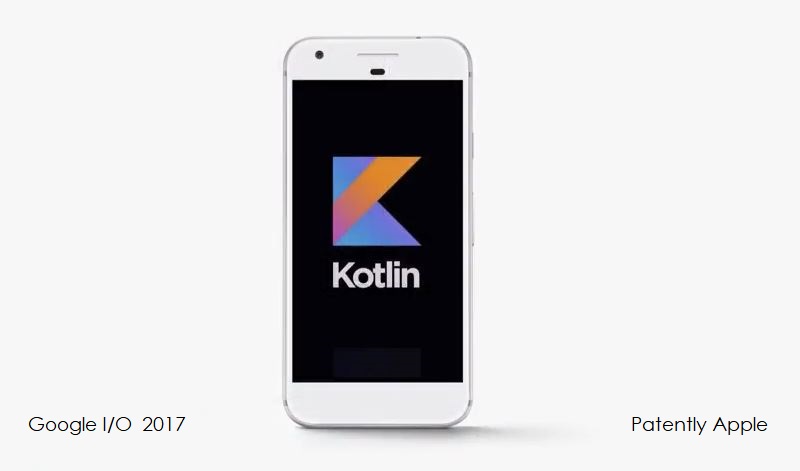 The programming language Kotlin is coming to Android 'O' and that seemed to excite their developer base. Here's one testimony about Kotlin. I guess you have to be a programmer to appreciate that feature. And lastly developers far and wide can get their hands on Android 'O' beta as noted below. 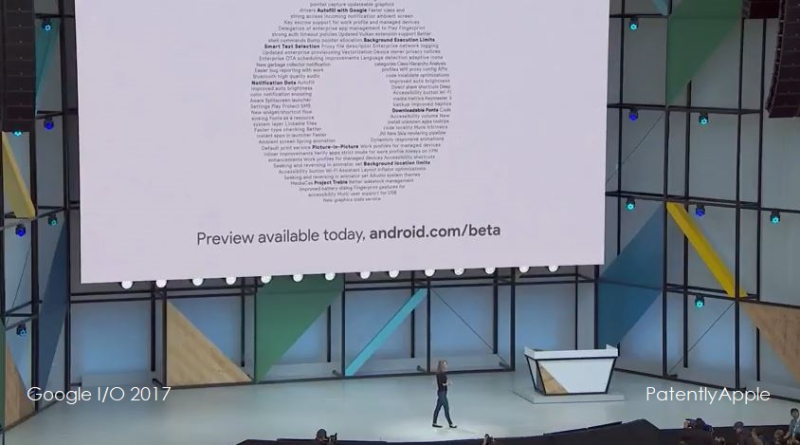 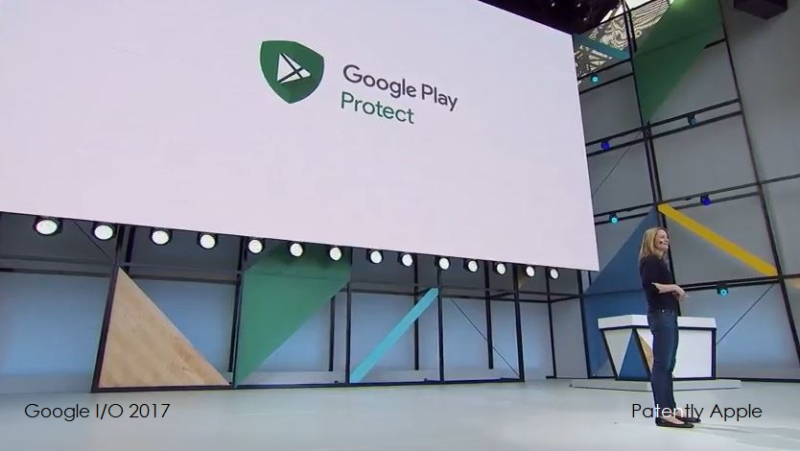 Our report ends on a somewhat funny note. Android has been the home of Malware forever. Google want's to shake off that image by introducing 'Google Play Protect.' Google's representative ranted off figures showing that they're the safest OS on the planet, but only Google believes that.

At least they have a new shiny logo to show-off and make it seem real to those contemplating the purchase of an Android device. Of course I'm compelled to say "Buyer Beware." Nice logos don't protect anything.

Google acknowledging that they had to at least make it appear that they're actually doing something to reverse their bad reputation on the malware front is a start. On another front, "Project Treble' is another attempt at getting Android smartphones updated in a timely manner. What is that now - attempt #409 and counting? Good luck.

All in all there were a few interesting features brought to the table today at Google I/O. Yet the number one war front that became obvious this month was the invasion of AI-centric home devices.

In the last few weeks Amazon, Microsoft and now Google have all made significant strides to advance their AI-based home devices. We have to hope that Apple will finally get a pawn on the chessboard in this very important game that they're close to being last to enter. I think they'll be a huge sigh of relief if Apple introduces their Siri based solution next month if not a roar of approval. Apple's WWDC can't come soon enough.